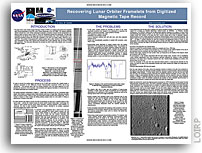 Poster presented at the 42nd Lunar and Planetary Science Conference by A. Epps, M. Sandler

“The goal of the Lunar Orbiter Image Recovery Project (LOIRP) is to digitize and archive the magnetic tape records generated by the five Lunar Orbiter spacecraft in the mid-1960s. The readout scanners utilized onboard the Lunar Orbiter spacecraft employed a phosphor-covered anode bombarded by an electron beam to focus a spot of light on 70mm film developed onboard the spacecraft. This light was modulated by the density of the image and read by a photomultiplier tube. Each individual pass of this scanning procedure across the 70mm film produced a thin strip of a larger image, referred to as a “framelet”. The product of the spacecraft’s readout system was a video waveform that was modulated and transmitted to three DSIF stations and recorded onto 2-inch magnetic tape via Ampex FR-900 data recorders. This document discusses the process by which these video signals were converted into digital images.” More