How Lunar Orbiter Images Were Recorded 45 Years Ago 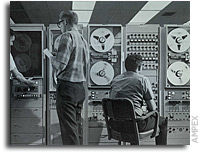 April 1967: “Fifty Years of Data in One Week: Recently, Oran W. Nicks, NASA’s Director of Lunar and Planetary Programs, remarked: “one astronomer has said that more information has been obtained in the first seven days of the Lunar Orbiter I project than in the last 50 years of study of the Moon.” Truly, the matchless cooperation and inspired creativity exhibited in the design and construction of Lunar Orbiter spacecraft and, supporting equipment by NASA, the scientific community, and American industry has helped us to take those longer-strides that President Kennedy called for in 1961 when he first spoke of the Apollo landing of a man on the Moon and returning him safely to the earth.”