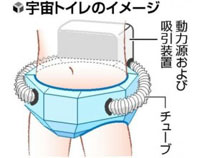 “Underwear you can wear up to two weeks at a time without having to worry about the smell? Andy Jordan’s Tech Diary looks into the technological feat, how it works, and who is using the underwear. Yes, there’s a smell test.”

Keith’s note: The video focuses on underwear that can be worn for prolonged periods of time without risk of odor, disease, etc. An anti-microbial barrier in the fabric of the underwear kills odor-causing microorganisms. My 2 cent’s worth about NASA spinoffs is at the end of the video. Having been a climber and participated in a number of expeditions to utterly remote and harsh locations for long periods of time (Devon Island, Everest Base Camp) let me tell you, advances such as this are of critical importance. The relevance to expeditions to other worlds is obvious. Not only is life more pleasant (a big deal when you are far away and under lots of risk and stress) but if you can wear clothing longer you cut down on the energy costs of cleaning garments and the logistics (and upmass) of providing additional new garments. This special underwear has already been tested on ISS.