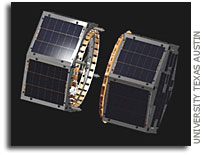 Two satellites designed and constructed by students at the Cockrell School of Engineering successfully separated in space March 22, completing the most crucial goal of the mission since its Nov. 19 launch and making them the first student-developed mission in the world in which satellites orbit and communicate with each other in real-time.
The satellites separated March 22 at 6:35 a.m. Central Standard Time. Now that they’re apart, the 60-plus pound, tire-sized satellites will be able to perform the main goals of the project and could pave the way for more complex satellite missions that require real-time coordination between small satellites.

Traditionally, larger and expensive satellites have been commonplace in space missions but the satellites developed by more than 150 aerospace engineering graduate and undergraduate students could demonstrate the potential for space technology that’s more affordable and accessible–a forward-looking approach that’s attracted the interest of the Air Force and NASA.

The smaller satellites could also help prevent tragedies like the Columbia space shuttle disaster, which, unknown to the shuttle’s crew, had a hole in the left wing that caused it to disintegrate upon reentry to the Earth’s atmosphere Feb. 1, 2003, killing all seven onboard.

“If they would have had the technology that could go outside the shuttle and inspect it, then the hole could have been discovered,” Lightsey said.

The students, led by their faculty advisor Professor Glenn Lightsey, built the satellites over the course of seven years using a shoestring hardware budget of $250,000 — a small amount compared to the millions typically spent on spacecraft missions.

They were launched into orbit from Alaska’s Kodiak Launch Complex in November, a moment that was considered the pinnacle of the students’ years of work. But the real moment of truth came early Tuesday morning when they separated, said Lightsey.

“We had to work through some problems on the satellites to get the separation to occur, but the student-team figured out a way to get the command to work. I am very proud of all of them,” said Lightsey. “We have achieved a true first in spacecraft engineering.”

The satellites will collect scientific data and be able to report their location and proximity to each other to students and amateur radio operators tracking their orbit some 400 miles above.

The project is part of the University Nanosat-3 Program started in 2003 and sponsored by the Air Force. In January 2005, The University of Texas at Austin bested 11 other universities and won the program’s grant-based competition to launch the FASTRAC satellites into space.