Economist: Beam it up 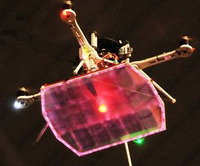 The March 14th issue of the Economist has a good article on bean power technology titled Beam it up, “Energy: Laser beams can deliver energy to machines through thin air. This might be a good way to power drone aircraft or a space elevator.” This will no doubt bring more awareness to one aspect of the a future space elevator system.

“THE Pelican, a small, remotely controlled helicopter drone weighing less than a kilogram, is powered by a battery that provides about 20 minutes’ flying. And yet, one evening last October, the Pelican took off, rose ten metres and hovered throughout the night. It was brought down in the morning only because the exhibition hall near Seattle, where it was airborne, was about to open for business.”
Ascending Technologies of Germany built the Pelican however it uses Seattle based LaserMotive’s laser system. LaserMotive is the team that won $900,000 in the NASA sponsored Power Beaming Challenge of the Space Elevator Games of 2009.