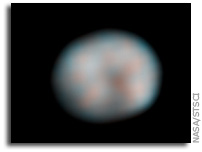 “Dear Colleagues: Dr. Bonnie Buratti and I are members of the DAWN science team and we are in the process of generating a photometric model of 4 Vesta in anticipation of spacecraft rendezvous in August 2011. Ground-based photometry of V-type asteroids (Vestoids) over a wide range of solar phase angles would be extremely useful in constraining our model.

We have identified three Vestoids that are well-placed for observation during spring of 2011: 1981 Midas, 4668 (1980 WF), and 137052 (1998 VO3). All three are near-Earth asteroids and all three should be brighter than V~18 for a significant portion of their apparitions. 4888 (1980 WF) remains near the ecliptic throughout the apparition while 137052 (1998 VO33) and 1981 Midas will be best observed from the northern and southern hemispheres, respectively. Photometry would likely have to be accurate to 0.1 mag to be useful although more precise photometry (preferably to 0.01 mag) would allow us to subtract rotational lightcurve effects.

If you would like to join us in this project we would most welcome your help. Please contact Michael.Hicks@jpl.nasa.gov and of course any collaborators would be coauthors on any publication that utilizes the data.” [Source: Planetary Exploration Newsletter]