Researchers at the University of Maryland and Michigan Technological University have operated a tiny proposed satellite ion rocket under a microscope to see how it works.
Image: The tree-like formations in this molten salt formed under the high-radiation of a transmission electron microscope beam; the jet of ions from the material could serve as a thruster for a nanosatellite

The rocket, called an electrospray thruster, is a drop of molten salt. When electricity is applied, it creates a field on the tip of the droplet, until ions begin streaming off the end. The force created by the rocket is less than the weight of a human hair, but in the vacuum of space it is enough to push a small object forward with a constant acceleration. Many of these tiny thrusters packed together could propel a spacecraft over great distances, maybe even to the nearest exoplanet, and they are particularly useful for Earth-orbiting nanosatellites, which can be as small as a shoe box. These thrusters are currently being tested on the European Space Agency’s LISA Pathfinder, which hopes to poise objects in space so precisely that they would only be disturbed by gravitational waves.

But these droplet engines have a problem: sometimes they form needle-like spikes that disrupt the way the thruster works – they get in the way of the ions flowing outward and turn the liquid to a gel. Lyon B. King and Kurt Terhune, mechanical engineers at Michigan Tech, wanted to find out how this actually happens. 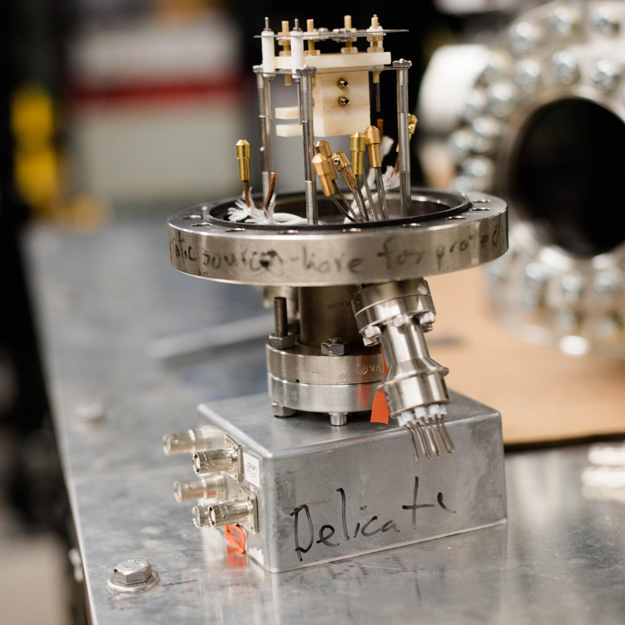 “The challenge is making measurements of features as small as a few molecules in the presence of a strong electric field, which is why we turned to John Cumings at the University of Maryland,” King says, explaining Cumings is known for his work with challenging materials and that they needed to look for a needle in a haystack. “Getting a close look at these droplets is like looking through a straw to find a penny somewhere on the floor of a room–and if that penny moves out of view, like the tip of the molten salt needles do–then you have to start searching for it all over again.”

At the Advanced Imaging and Microscopy Lab at the University of Maryland, Cumings put the tiny thruster in a transmission electron microscope – an advanced scope that can see things down to millionths of a meter. They watched as the droplet elongated and sharpened to a point, and then started emitting ions. Then the tree-like defects began to appear.

The researchers say that figuring out why these branched structures grow could help prevent them from forming. The problem occurs when high-energy electrons, like those used in the microscope’s imaging beam, impact the fluid causing damage to the molecules that they strike. This damages the molten salt’s molecular structure, so it thickens into a gel and no longer flows properly.

“We were able to watch the dendritic structures accumulate in real time,” says Kurt Terhune, a mechanical engineering graduate student and the study’s lead author. “The specific mechanism still needs to be investigated, but this could have importance for spacecraft in high-radiation environments.”

He adds that the microscope’s electron beam is more powerful than natural settings, but the gelling effect could affect the lifetime of electrospray thrusters in low-Earth and geosynchronous orbit.