Topography of The Antarctic Seafloor in Unprecedented Detail

Reliable information on the depth and floor structure of the Southern Ocean has so far been available for only few coastal regions of the Antarctic. An international team of scientists under the leadership of the Alfred Wegener Institute, Helmholtz Centre for Polar and Marine Research, has for the first time succeeded in creating a digital map of the entire Antarctic seafloor.
The International Bathymetric Chart of the Southern Ocean (IBCSO) for the first time shows the detailed topography of the seafloor for the entire area south of 60*S. An article presented to the scientific world by IBCSO has now appeared online in the scientific journal Geophysical Research Letters. The IBCSO data grid and the corresponding Antarctic chart will soon be freely available in the internet and are intended to help scientists amongst others to better understand and predict sea currents, geological processes or the behaviour of marine life.

Image: Multibeam bathymetric survey techniques provide a rapid means of determining the morphology and nature of the seafloor. The recent Hydrosweep DS-2 System onboard R/V Polarstern provides 59 individual soundings of the water depth and echo strength for each ping. Moreover sidescan information (2048 echos per ping) is retrieved. The system can be operated with 90 or 120 degrees fan angle and is designed for deep sea observations. Illustration: Alfred-Wegener-Institut

The new bathymetric chart of the Southern Ocean is an excellent example of what scientists can achieve if researchers from around the world work across borders. “For our IBCSO data grid, scientists from 15 countries and over 30 research institutions brought together their bathymetric data from nautical expeditions. We were ultimately able to work with a data set comprising some 4.2 billion individual values”, explains IBCSO editor Jan Erik Arndt, bathymetric expert at the Alfred Wegener Institute in Bremerhaven.

Collecting bathymetric data, as with the German research vessel Polarstern with its multibeam echo sounding system, was nowhere near enough, however, to develop a useful, three-dimensional model of the seafloor: “The ocean south of the 60th parallel extends over an area of some 21 million square kilometres and is therefore around 60 times as large as the Federal Republic of Germany. Reliable bathymetric data have so far existed for only 17 per cent of this area. The largest data gaps, for example, are in the deep sea regions of the south Indian Ocean and the South Pacific and in areas which experience difficult sea ice conditions throughout the year in some places, such as in the Weddell Sea”, says Jan Erik Arndt.

For this reason the mappers did not just take the trouble to digitize old Antarctic nautical charts and to convert satellite data. They also used a mathematical trick by interpolating the data set. “We treated every existing measurement point like a tent pole to a certain extent and arithmetically covered these poles with a tarpaulin. In this way we obtained approximate values about the height of the tarpaulin between the poles”, explains the AWI specialist for data modeling. 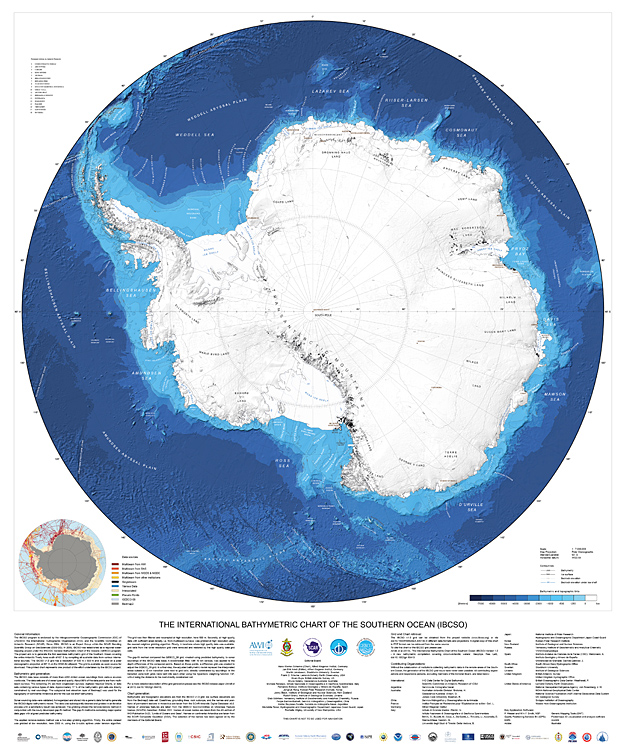 Where older models only offer a glimpse of a mountain in the deep sea, IBCSO shows an elevation with sharp ridge crests and deep channels in the slopes. A formerly flat point at the bottom of the Riiser-Larsen Sea can now be identified as an offshoot, some 300 metres deep, of the underwater Ritscher Canyon which runs along a length of over 100 kilometres from the south west to the north. And not far away from today’s shelf ice edge of the large Getz ice shelf the furrows are to be seen quite clearly which were ploughed into the seafloor by the ice tongue as it grew.

Using this degree of detail IBCSO is primarily intended to push ahead with research: “The depth data of the Southern Ocean are of great interest to polar researchers from many disciplines. The 3D data grids of the seafloor enable oceanographers to model currents and the movement of the deep Antarctic water which is of such great importance. Geologists are able to recognise the structures of geological processes more easily. Biologists may be able to better estimate the regions in which certain biological communities may emerge or whether, for example, seals dive to the bottom of the sea in a certain area in search of food”, explains Jan Erik Arndt.

However, despite the elation about the new model and its chart, it should not be forgotten that more than 80 per cent of the area of the South Polar Sea is still unchartered. Jan Erik Arndt: “We hope that as our data grid becomes better known in the scientific world, other scientists will be more willing to provide us with their data of current and future depth measurements in the South Polar Sea. The chances are not bad. A few new research ice breakers are currently being built around the world and every one of them will presumably be equipped with a modern multibeam echo sounder in the same way as Polarstern.”

Both the IBCSO data grid and a digital print template of the chart (dimensions: 100 centimetres times 120 centimetres) will be available for downloading to everyone soon on the project website at www.ibcso.org.

IBCSO is a project of the General Bathymetric Chart of the Oceans (GEBCO). It is supported by the Intergovernmental Oceanographic Commission (IOC) of UNESCO, the International Hydrographical Organisation (IHO), the Hydrographic Commission on Antarctica (HCA) and by the Scientific Committee on Antarctic Research (SCAR). The geodesy and bathymetry working group of the Alfred Wegener Institute coordinates the project and is responsible for the entire modelling work.

More information on IBCSO and the research institutions involved is available at the project website at www.ibcso.org.

The Alfred Wegener Institute conducts research in the Arctic and Antarctic and in the high and mid-latitude oceans. The Institute coordinates German polar research and provides important infrastructure such as the research ice breaker Polarstern and stations in the Arctic and Antarctic to the international scientific world. The Alfred Wegener Institute is one of the 18 research centres of the Helmholtz Association, the largest scientific organisation in Germany.