The most powerful typhoon of 2013 was passing between northern Philippines and southern Taiwan on Sept. 19.
When NASA’s Aqua satellite passed over Usagi, infrared data showed a large area of powerful thunderstorms and heavy rain surrounding the center while NASA’s TRMM satellite measured that heavy rainfall from space.

Super-Typhoon Usagi is a monster storm that according the Joint Typhoon Warning Center is headed for a landfall near Hong Kong on Sept. 22 around 1200 UTC/8 a.m. EDT/8 p.m. local time Hong Kong.

In this TRMM satellite flyover animation from Sept. 19 rain was falling at a rate of over 140mm/~5.5 inches (red) per hour in the powerful storms within Super Typhoon Usagi’s eye wall. Image Credit: NASA/SSAI, Hal Pierce.

NASA’s Tropical Rainfall Measuring Mission or TRMM satellite had an excellent view of Usagi September 19, 2013 at 1035 UTC/6:35 a.m. EDT/6:35 p.m. local time Hong Kong. At NASA’s Goddard Space Flight Center in Greenbelt, Md. a precipitation analysis from TRMM’s Microwave Imager (TMI) and Precipitation Radar (PR) instruments was overlaid on an enhanced infrared image from TRMM’s Visible and InfraRed Scanner (VIRS). The most striking feature on the image was Usagi’s small, clear eye. Rain was measured by TRMM’s PR instrument falling at a rate of over 140mm/~5.5 inches per hour in the powerful storms within super typhoon Usagi’s eye wall.

TRMM’s Precipitation Radar or PR can provide 3-D vertical profiles of rain and snow from the surface up to a height of about 12 miles/20 kilometers. TRMM’s 3-D view of the vertical structure near Usagi’s eye found that the violent storms in Usagi’s eye wall were consistently reaching heights of over 15 km/~9.3 miles. A few storms found in a feeder band spiraling into Usagi from the south were reaching even higher heights of over 16 km/~9.9 miles.

After the TRMM satellite captured rainfall, NASA’s Aqua satellite passed over the Super-Typhoon. The Atmospheric Infrared Sounder or AIRS instrument that flies aboard NASA’s Aqua satellite captured an infrared image at 17:29 UTC/1:29 p.m. EDT that also clearly showed a pinpoint eye. AIRS measured cloud-top temperatures to determine cloud heights, which also indicate strength. Cloud top temperatures were as cold as 210 kelvin/ -81.6F/-63.1C, indicating very high, very powerful thunderstorms with heavy rainfall potential. Strong thunderstorms with heavy rain were over northern Luzon, Philippines at the time of the image. Infrared data on Sept. 20 revealed that convection (rising air that forms the thunderstorms that make up the tropical cyclone) in the northern quadrant were decaying, or weakening. 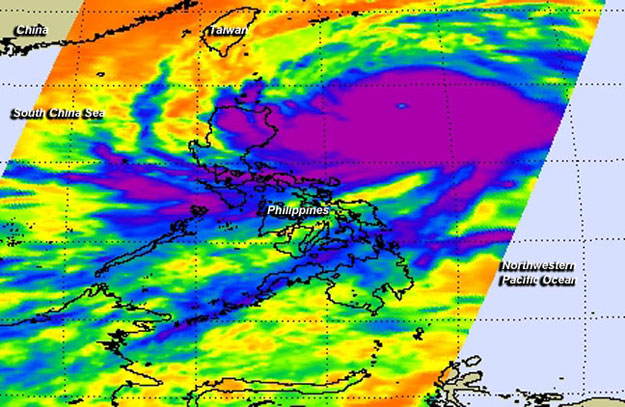 Satellite data also showed that Usagi was undergoing eyewall replacement on Sept. 20, which is typical for very powerful typhoons or hurricanes.

There are warnings in effect in Taiwan, the northern Philippines and China. Typhoon Warnings are up for Taiwan, especially for southeastern and southwestern areas as Usagi is forecast to move south of the island. In the Philippines, warnings and watches were posted for the northern provinces of the Philippines that include flash flooding, heavy rain, landslides and storm surges.

In China, the China Meteorological Administration or CMA issued an orange alert. The CMA’s website noted that Usagi is expected to move across Bashi Channel at noon (local time) on Sept. 20 then enter northeastern South China Sea to approach coastal Guangdong.

The latest Joint Typhoon Warning Center forecast projects that Usagi will pass north of the Philippines in the next couple days and then pass very close to the southern tip of Taiwan on September 21. This path exposes southern Taiwan to the most dangerous part of the typhoon.