Wherever fires are burning around the world NASA-NOAA’s Suomi NPP satellite’s Ozone Mapping and Profiler Suite (OMPS) can track the smoke and aerosols.
On Sept. 13, 2019, data from OMPS revealed aerosols and smoke from fires over both South America and North America.

Suomi’s OMPS tracks the health of the ozone layer and measures the concentration of ozone in the Earth’s atmosphere and can detect aerosols. Ozone is an important molecule in the atmosphere because it partially blocks harmful ultra-violet radiation from the sun. OMPS data help scientists monitor the health of this vital protective layer.

OMPS also can be used to measure concentrations of atmospheric aerosols from dust storms and similar events as well as sulfur dioxide (SO2) from volcanic eruptions. One aerosol-related OMPS product is a value known as the “aerosol index,” or AI. The AI value is related to both the thickness and height of the atmospheric aerosol layer. For most atmospheric events involving aerosols, the AI ranges from 0.0 to 5.0, with 5.0 indicating heavy concentrations of aerosols that could reduce visibilities and/or impact health.

The first OMPS was launched onboard the Suomi NPP satellite in October 2011.

An aerosol is a suspension of fine solid particles or liquid droplets, in air or another gas. Aerosols can be natural or anthropogenic (manmade). Examples of natural aerosols are fog, dust and geyser steam. Examples of manmade aerosols include haze (suspended particles in the lower atmosphere), particulate air pollutants and smoke.

High aerosol concentrations not only can affect climate and reduce visibility, they also can impact breathing, reproduction, the cardiovascular system, and the central nervous system, according to the U.S. Environmental Protection Agency. Since aerosols are able to remain suspended in the atmosphere and be carried along prevailing high-altitude wind streams, they can travel great distances away from their source and their effects can linger. 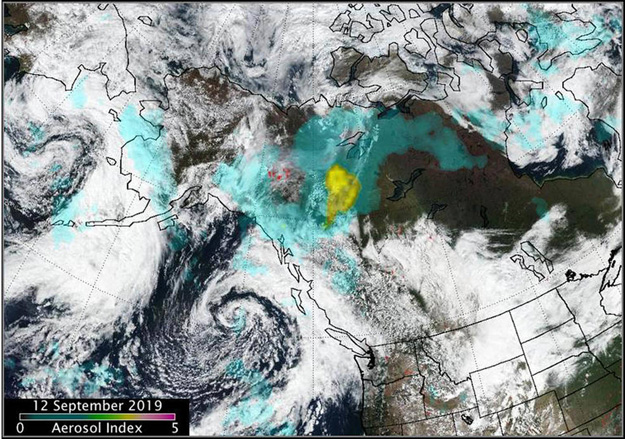 In North America, Suomi NPP’s OMPS detected smoke and aerosols from fires over Canada’s Yukon Territories. Aerosol concentrations were very high over the Yukon fires due to a pyrocumulus event that occurred on 11 September. In the image, there is also light brown area of smoke that looks like a letter “C” on its side. The image also shows a low pressure system (the area of spiraled clouds) off the coast of western Canada. Credits: Credit: NASA/NOAA, Colin Seftor

Fires in South America generated smoke that continues to create a long plume east into the Atlantic Ocean. Fires over western Brazil were generating aerosols at a level 2.0 on the index. Higher aerosol concentrations, as high as 4.0 were seen off the southeastern coast of Brazil as a result of the fires in the region.

In North America, Suomi NPP’s OMPS detected smoke and aerosols from fires over Canada’s Yukon Territories. Aerosol concentrations were very high over the Yukon fires due to a pyrocumulus event that occurred on September 11.

Pyrocumulus clouds–sometimes called “fire clouds”–are tall, cauliflower-shaped, and appear as opaque white patches hovering over darker smoke in satellite imagery. Pyrocumulus clouds are similar to cumulus clouds, but the heat that forces the air to rise (which leads to cooling and condensation of water vapor) comes from fire instead of sun-warmed ground. Under certain circumstances, pyrocumulus clouds can produce full-fledged thunderstorms, making them pyrocumulonimbus clouds.

Scientists monitor pyrocumulus clouds closely because they can inject smoke and pollutants high into the atmosphere. As pollutants are dispersed by wind, they can affect air quality over a broad area.

The image also contains a light brown area of smoke that looks like a letter “C” on its side and a low pressure system (the area of spiraled clouds) off the coast of western Canada.

Both images were created at the NASA Goddard Space Flight Center in Greenbelt, Md.