Every summer, something strange and wonderful happens above the North Pole. Ice crystals begin to cling to dust and particles high in the atmosphere, forming electric-blue, rippled clouds that stretch across the sky at sunset. Noctilucent or “night-shining” clouds are a delight for high-latitude sky watchers, and their season is eagerly anticipated around the Arctic Circle.
This year, noctilucent clouds (NLCs) got an early start; NASA’s Aeronomy of Ice in the Mesosphere (AIM) spacecraft first saw them on May 13. “The 2013 season is remarkable because it started in the northern hemisphere a week earlier than any other season that AIM has observed,” said Cora Randall of the Laboratory for Atmospheric and Space Physics at the University of Colorado. “This is quite possibly earlier than ever before.”

The images above show Earth’s upper atmosphere, centered on the North Pole, as observed by the AIM satellite. The image on the upper right shows noctilucent clouds on May 23, 2013; the upper left image compares the same week from 2012. The two bottom images show the extent of NLCs in mid-June of each year. The brighter the clouds in each image, the denser the ice particles. Areas with no data appear in black, and coastal outlines are traced in white. An animation of noctilucent cloud extent in both years is available for download below the main image. 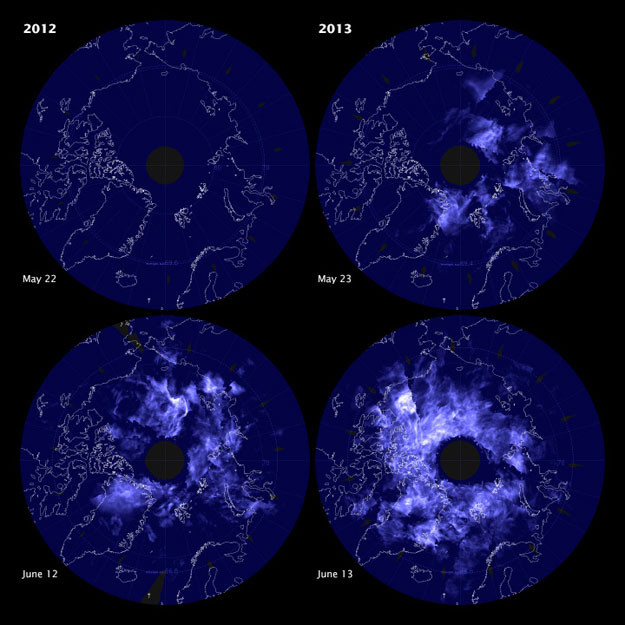 The early start in 2013 is puzzling because of the solar cycle. Researchers have previously observed that noctilucent clouds seem to peak during solar minimum and become scarce during solar maximum. “If anything, we would have expected a later start this year because the solar cycle is near its maximum,” Randall said.

Noctilucent clouds were first described in the mid-19th century after the eruption of Krakatau. Volcanic ash spread through the atmosphere, painting vivid sunsets around the world and provoking the first written observations of NLCs. At first people thought they were a side-effect of the volcano, but long after Krakatau’s ash settled, the wispy, glowing clouds remained.

When AIM was launched in 2007, the cause of noctilucent clouds was still unknown. Researchers knew that they formed about 80 kilometers (50 miles) above Earth’s surface–where the atmosphere meets the vacuum of space–but that’s about all they knew. AIM has quickly filled in the gaps.

“It turns out that meteoroids play an important role in the formation of NLCs,” explained James Russell, the principal investigator of AIM and a professor at Hampton University. “Specks of debris from disintegrating meteors act as nucleating points where water molecules can gather and crystallize.” Ash and dust from volcanoes–and even rocket exhaust–also can serve as nuclei for NLCs.

NLCs most often appear during spring and summer because more water molecules are wafted up from the lower atmosphere to mix with the meteor debris and ash. The warmest months in the troposphere (lower atmosphere) are also the coldest in the mesosphere (where NLCs form).

According to Randall and other scientists, noctilucent clouds are becoming more frequent and widespread. In the 19th century, reports of NLCs were mostly confined to high latitudes. In recent years, however, they have been sighted as far south as Utah, Colorado, and Nebraska. Some researchers assert that this is a sign of greenhouse warming, as methane has become more abundant in Earth’s atmosphere. “When methane makes its way into the upper atmosphere, it is oxidized by a complex series of reactions to form water vapor,” Russell said. “This extra water vapor is then available to grow ice crystals for NLCs.”

Randall suggested that the earlier start in 2013 may be the result of a change in atmospheric “teleconnections,” or the way changes in one part of the atmosphere affect another. “Half-a-world away from where the NLCs are forming, strong winds in the southern stratosphere are altering global circulation patterns. This year, more water vapor is being pushed into the high atmosphere, and the air there is getting colder.”

“When we launched AIM, our interest was in the clouds themselves,” Russell added. “But now NLCs are teaching us about connections between different layers of the atmosphere that operate over great distances. Our ability to study these connections will surely lead to new understanding about how our atmosphere works.”

You can view a daily composite projection of noctilucent clouds by clicking here during the northern summer months.