NASA-NOAA’s Suomi-NPP satellite flew over Tropical Storm Dorian on July 25 at 03:52 UTC (July 24 at 11:52 p.m. EDT). At that time the Visible Infrared Imager Radiometer Suite or VIIRS instrument that flies aboard the satellite captured a night-time, infrared image of Tropical Storm Dorian. VIIRS data showed that the thunderstorms that surround the center of circulation were as cold as 195 to 200 kelvin. Those frigid temperatures indicate very high thunderstorms shooting to the top of the troposphere (lowest layer of atmosphere). 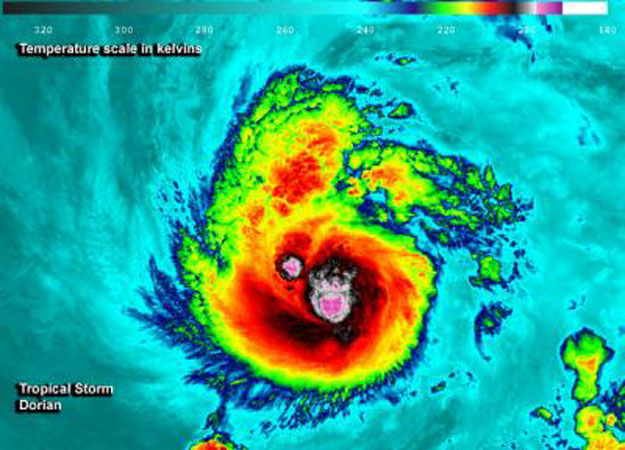 This night-time, infrared image of Tropical Storm Dorian was taken from the VIIRS instrument aboard the Suomi-NPP satellite on July 25 at 03:52 UTC. The red and purple areas are very high thunderstorms. Credit: Image Credit: UWI-Madison/NASA-NOAA. 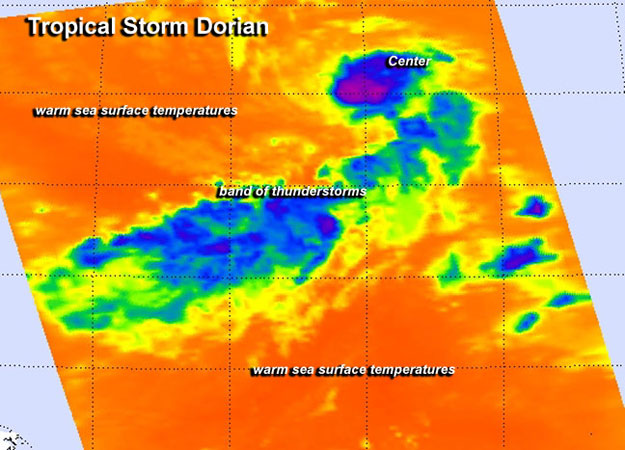 On July 25 at 11:59 a.m. EDT, AIRS data showed Dorian had strong thunderstorms (purple) around its center and in a fragmented band wrapping into the center from the south. Credit: Image Credit: NASA/JPL, Ed Olsen.

When NASA and the Japan Space Agency’s Tropical Rainfall Measuring Mission or TRMM satellite passed over Dorian on July 26 at 01:39 UTC (9:39 p.m. EDT on July 25), the instruments aboard measured the rainfall rates occurring within the storm. Mostly light to moderate rainfall was found near Dorian’s center of circulation by TRMM’s Microwave Imager (TMI) and Precipitation Radar (PR) instruments. TRMM imagery is created at NASA’s Goddard Space Flight Center in Greenbelt, Md. where TRMM precipitation data is placed atop a visible/infrared image from TRMM’s Visible and InfraRed Scanner to form a complete picture. 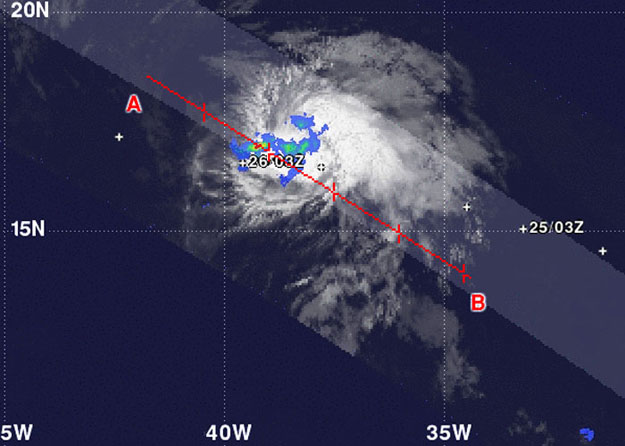 NHC noted that Dorian’s disorganization is possibly due to a combination of southwesterly vertical wind shear and mid to upper-level dry air seen in water vapor imagery.

As the AIRS data showed on July 25, the convective area (showers and thunderstorms) has become elongated from north to south.

Dorian is expected to continue moving west-northwest and in 4 or 5 days (by Monday, July 29); NOAA forecasts take the storm over Hispaniola.