A new dataset called Bedmap2 gives a clearer picture of Antarctica from the ice surface down to the bedrock below. Bedmap2 is a significant improvement on the previous collection of Antarctic data–known as Bedmap–that was produced more than 10 years ago.
The product was a result of work led by the British Antarctic Survey, where researchers compiled decades worth of geophysical measurements, such as surface elevation measurements from NASA’s Ice, Cloud and Land Elevation Satellite, known as ICESat, and ice thickness data collected by Operation IceBridge.

With effects ranging from influencing ocean currents to raising sea level, Antarctica plays a large role in the global climate system. Researchers are using a variety of methods to understand how Antarctica will react to a changing climate, but limited information on ice thickness and what lies beneath the ice makes this work challenging. Now, thanks to work led by the British Antarctic Survey published recently in the journal The Cryosphere, scientists will have a new detailed map of the frozen continent.

Bedmap2, like the original Bedmap, is a collection of three datasets–surface elevation, ice thickness and bedrock topography. Over the past decade there have been many Antarctic surveys, which vastly increased the amount of available data. Researchers used data from satellites, aircraft and surface-based surveys to build a data product with higher resolution, greater coverage and improved precision. Both Bedmap and Bedmap2 are laid out as grids covering the entire continent, but with a tighter grid spacing, Bedmap2 includes many surface and sub-ice features too small to be seen in the previous dataset. The millions of additional data points in Bedmap2 also cover a larger percentage of Antarctica. Additionally, the extensive use of GPS data in more recent surveys improves the precision of the new dataset. Improvements in resolution, coverage and precision will lead to more accurate calculations of ice volume and potential contribution to sea level rise. 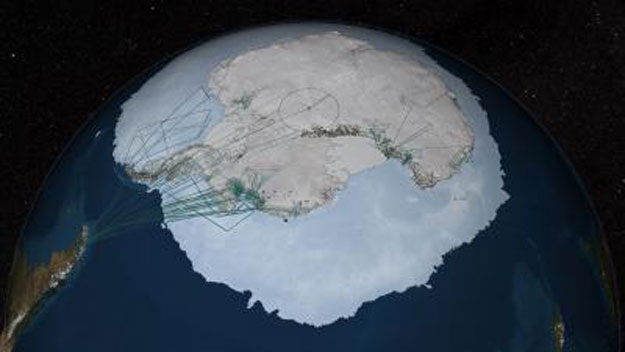 A significant portion of the data in Bedmap2 was collected by NASA’s Operation IceBridge. Flight paths from the 2009, 2010 and 2011 Antarctic campaigns are shown here as dark green lines. NASA DC-8 flights originated from Punta Arenas, Chile, on the left side of the image. Flight lines in East Antarctica represent surveys flown by the Institute for Geophysics at the University of Texas at Austin, one of IceBridge’s partnering organizations. Credit: NASA Goddard’s Scientific Visualization Studio

Total ice volume and sea level contribution remain similar to calculations using the original Bedmap, but Antarctica’s average bedrock depth, deepest point and ice thickness estimates have all increased. Peter Fretwell, BAS scientist and lead author, said the new dataset increases our knowledge of the sub-glacial environment and will be help future research on the Antarctic ice sheet. “It will be an important resource for the next generation of ice sheet modelers, physical oceanographers and structural geologists,” said Fretwell.

Ice sheet modeling is an area that will likely make heavy use of Bedmap2 data. Ice sheets are thick, dome-shaped formations of ice that cover large areas of land. There are two major ice sheets on Earth, one covering Greenland and one over Antarctica. Ice sheets are formed as snow accumulates and is compacted into ice over many years. “Ice sheets grow because of snow, and like honey poured on a plate, spread outward and thin due to their own weight,” said Sophie Nowicki, an ice sheet scientist at NASA’s Goddard Space Flight Center in Greenbelt, Md.

ce sheet researchers use computer models to simulate how ice sheets will respond to changes in ocean and air temperatures. An advantage of these simulations is that they allow testing of many different climate scenarios, but the models are limited by how accurate the data on ice volume and sub-ice terrain are. “In order to accurately simulate the dynamic response of ice sheets to changing environmental conditions, such as temperature and snow accumulation, we need to know the shape and structure of the bedrock below the ice sheets in great detail,” said Michael Studinger, IceBridge project scientist at NASA Goddard.

Knowing what the bedrock looks like is important for ice sheet modeling because features in the bed control the ice’s shape and affect how it moves. Ice will flow faster on a downhill slope, while an uphill slope or bumpy terrain can slow an ice sheet down or even hold it in place temporarily. “The shape of the bed is the most important unknown, and affect how ice can flow,” said Nowicki. “You can influence how honey spreads on your plate, by simply varying how you hold your plate.” The vastly improved bedrock data included in Bedmap2 should provide the level of detail needed for models to be realistic.

Creating such a detailed map required researchers to collect and analyze large sums of data from a variety of sources. NASA contributed significant amounts of data on surface elevation, ice shelf limits and ice thickness. For example, measurements from three Operation IceBridge airborne campaigns make up about 12 percent of the 25 million ice thickness data points gathered by more than 200 airborne campaigns over the past 50 years.

IceBridge uses an ice-penetrating radar instrument known as the Multichannel Coherent Radar Depth Sounder to gather data on ice thickness and subglacial topography. MCoRDS, operated by the Center for the Remote Sensing of Ice Sheets at the University of Kansas, sends radar signals down through the ice and records the angle and timing of returning waves to image the ice surface, internal layering and the bedrock below.

Researchers also used a large amount of ICESat data to build the surface elevation grid in hard-to-measure areas. Satellite radar altimetry, which makes up a large portion of Bedmap2, works best in flat areas. Mountainous and steeply sloping areas call for other methods, and data from ICESat’s laser altimeter helped researchers build an accurate map in these regions. In addition, the Bedmap2 team used IceBridge altimetry data to verify the accuracy of the combined surface datasets.

IceBridge data also played a big role by providing data on parts of Antarctica where there have been few to no measurements before. One such area is the Recovery Ice Stream, which IceBridge essentially put on the map with data from its 2011 Antarctic campaign. Both NASA and the U.S. National Science Foundation have invested a great deal of time and money in radars like MCoRDS and airborne campaigns like IceBridge over the years.

NASA’s contributions go beyond merely collecting this data. By making its data freely available to researchers, NASA is leading a positive trend with researchers. “We hope that other partners will also go down this road,” said Fretwell. Collecting radar sounding data over Antarctica is an expensive effort, which has led some researchers to be understandably protective. This could change, however, as more researchers make use of freely available data.