NASA’s Aqua and Terra satellites captured images as Typhoon Man-yi made landfall in southern Japan and moved across the big island.
Typhoon Man-yi was approaching Japan when NASA’s Aqua satellite passed overhead and captured a visible image on Sept. 15 at 0410 UTC/12:10 a.m. EDT. Man-yi weakened to a tropical storm as it quickly crossed Japan dropping heavy rainfall and causing deadly mudslides when NASA’s Terra satellite passed overhead on Sept. 16. Man-yi is now headed northeast into the Sea of Okhotsk.

When Aqua passed overhead, a visible image was taken by the Moderate Resolution Imaging Spectroradiometer or MODIS instrument. The image showed most of the powerful thunderstorms with heavy rainfall were wrapping around the center of Tropical Storm Man-yi, northwest and southeast of the center.

On Sept. 16 at 0140 UTC/Sept. 15 at 9:40 p.m. EDT Tropical Storm Man-yi covered two-thirds of the big island of Japan when NASA’s Terra satellite passed overhead and captured a visible image of the storm.
Man-yi took just a day to cross over Japan before exiting into the northwestern Pacific Ocean. The Joint Typhoon Warning Center forecast track on Sept. 16 takes Man-yi into the Sea of Okhotsk by Sept. 17.

Man-yi strengthened to a typhoon just before making landfall. It dropped heavy rainfall totals, created flooding in Kyoto, damaged homes and killed two people, according to the Associated Press. The Shiga and Fukui Prefectures reported mudslides. When Man-yi made landfall, it had maximum sustained winds near 100 mph (162 kph). According to the Japanese Meteorological Agency, Man-yi was dropping as much as 3 inches/76 mm of rain
per hour.

Warnings remain in effect for Tohoku and eastern Hokkaido on Sept. 16 as Man-yi moves past those prefectures today. Hokkaido is Japan’s northernmost prefecture, and second largest island. Man-yi is transitioning into an extra-tropical storm as it heads back over cooler ocean waters of the northwestern Pacific Ocean. 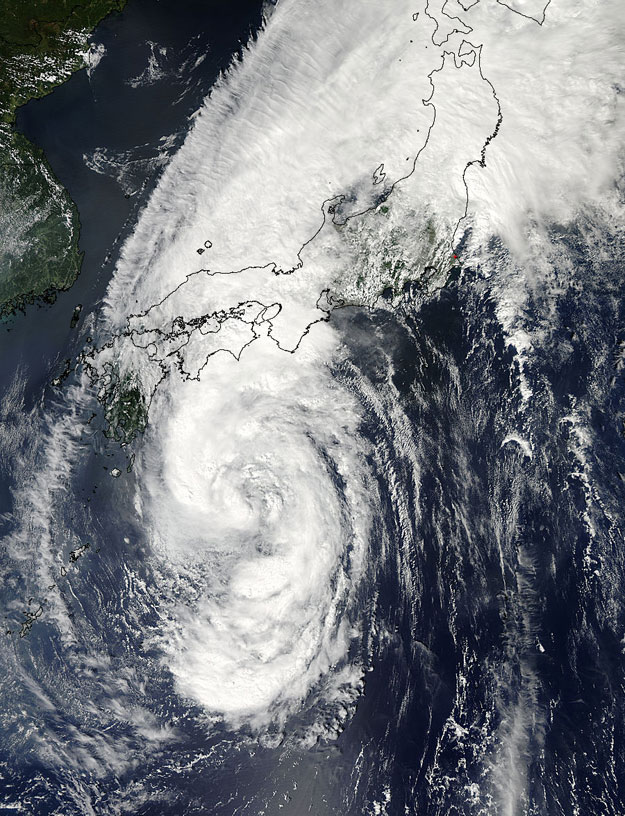