The newest tropical storm to form in the Atlantic was put in NASA’s “infrared spotlight.” NASA’s AIRS instrument uses infrared imaging to analyze tropical cyclones and captured an image of newborn Tropical Storm Dorian.
NASA’s Atmospheric Infrared Sounder instrument also known as AIRS, flies aboard the Aqua satellite. AIRS uses infrared light and shined that light on Tropical Storm Dorian on July 25 at 03:29 UTC (11:29 p.m. EDT, July 24). Infrared data helps determine temperature, such as the cloud top and sea surface temperatures. AIRS data revealed that Dorian’s strongest storms and heaviest rains were around its center and in a band of thunderstorms south of the center. Those areas had cloud top temperatures near -63F/-52C, indicating very high thunderstorms.

Forecasters at the National Hurricane Center kept a close eye on Dorian over the last 24 hours as it traversed cooler sea surface temperatures, and survived. Dorian is now moving over and toward warmer waters.

The official position of Tropical Storm Dorian at 11 a.m. EDT (1500 UTC), was about 1,800 miles (2,900 km) east of the northern Leeward Islands, near 16.0 north and 35.9 west, according to the National Hurricane Center or NHC. The NHC noted that Dorian’s maximum sustained winds were near 60 mph (95 kph) and some fluctuations in intensity are expected in the next couple of days. The tropical-storm-force winds extend outward up to 60 miles (95 km) from the center, making Dorian about 120 miles (190 km) in diameter. 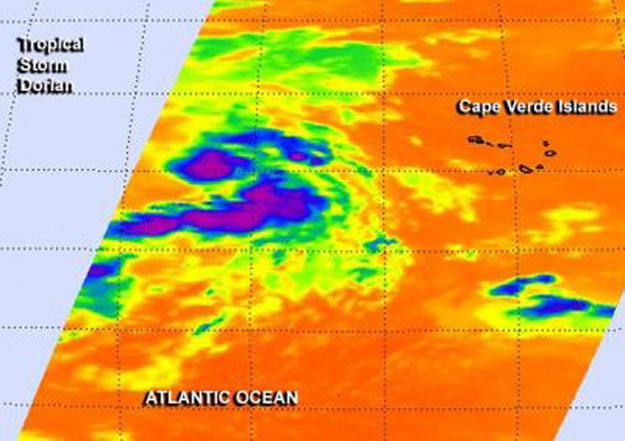 The AIRS instrument aboard NASA’s Aqua satellite captured this infrared image of Tropical Storm Dorian on July 25 at 03:29 UTC (11:29 p.m. EDT, July 24). Strongest storms and heaviest rains are around the center and in a band of thunderstorms south of the center with cloud top temperatures near -63F/-52C (purple). Credit: NASA JPL/Ed Olsen.

Dorian was moving toward the west-northwest near 17 mph (28 kph) and that general motion is expected to continue today, followed by a gradual turn toward the west on Friday, July 26. The estimated minimum central pressure is 999 millibars.

The NHC expects Dorian to continue to move west-northwest across the Atlantic.