NASA Damage Maps in Nepal May Help in Future Quakes

Nepal’s magnitude 7.8 Gorkha earthquake caused significant damage and loss of life in 2015. In natural disasters like this, it is critical to locate areas that are in the most need of assistance as fast as possible.
This image shows street-level photos in the Bhaktapur area of Nepal overlaid on a damage proxy map derived from data from COSMO-SkyMed satellites. The color gradation — yellow to orange to red — represents increasingly more significant change on the ground. Credit: NASA/JPL-Caltech/Google/DigitalGlobe/CNES/Astrium/Amy MacDonald/Thornton Tomasetti Larger view

Quickly assessing and communicating where the hardest-hit areas are and prioritizing which regions or communities have the greatest need for first-response teams is difficult when a disaster unevenly devastates various parts of a large area. It helps to get a bigger-picture view of where the damage is located from a high vantage point: low-Earth orbit.

Researchers led by Sang-Ho Yun at NASA’s Jet Propulsion Laboratory, Pasadena, California, have developed a way to make maps of damage using the remote sensing technology of satellites. This method works even if the satellite images are taken at night or when skies are cloudy. They recently published the results of using this new approach, to study impacts of the Gorkha earthquake, in the journal Seismological Research Letters.

“Our mapping system shows great potential, especially for isolated remote areas where there is no communication and the roads are blocked. Those are the communities in desperate need of help, and our maps could help responders provide efficient assistance,” said Yun.

Yun and colleagues made use of data from the Italian Space Agency’s (ASI) COSMO-SkyMed system and the Japan Aerospace Exploration Agency’s (JAXA) ALOS-2 satellite. These radar systems are complementary to each other, yet have different sensitivities, resolutions and orbits.

Using software developed at JPL, the researchers produced damage proxy maps using COSMO-SkyMed and ALOS-2 data, respectively, covering an area near Kathmandu, Nepal. For each data set, they examined the similarities between two radar images: two archival images from before the earthquake and one taken after.

The software allowed researchers to generate a distribution of colored pixels on a transparent background, which they overlaid on top of maps from Google Earth. The colors are on a scale from yellow to red, with red representing the areas of greatest potential damage. At 100-foot (30-meter) resolution, it is possible to see damage to major buildings, as well as large landslides.

“The colors are determined by the change between the before and after radar images. The more the images are different, the redder the image,” Yun said. 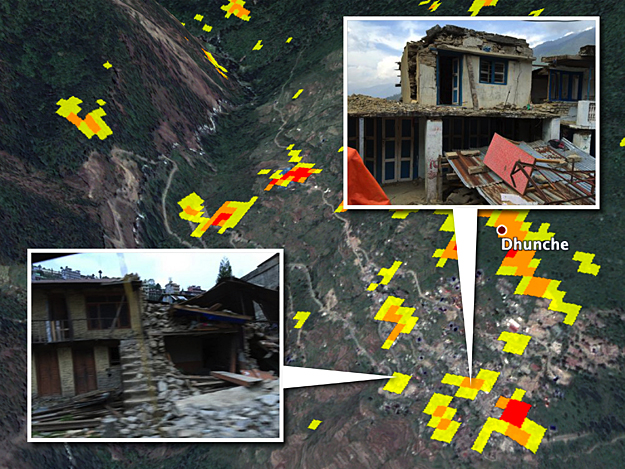 Street-level photos in the area of Dhunche, Nepal, are shown with a damage proxy map derived from data from the ALOS-2 satellite. The color gradation represents increasingly more significant change on the ground, with red being the most severe and yellow being the least severe. Credit: NASA/JPL-Caltech/Google/DigitalGlobe/Amy MacDonald/Thornton Tomasetti Larger view

The researchers then compared their damage proxy maps to maps that were made from human inspection of high-resolution optical satellite imagery, which came from the National Geospatial-Intelligence Agency (NGA) and the United Nations Operational Satellite Applications Programme. There was a strong agreement among the maps.

“We verified that the radar-based maps Sang-Ho generated so quickly were very consistently providing good information about where damage had occurred,” said Kenneth Hudnut, geophysicist with the U.S. Geological Survey, Pasadena, California, who co-authored the study.

With COSMO-SkyMed data, the damage proxy maps found clear evidence of building collapses. The damage proxy maps from ALOS-2 data additionally detected devastating landslides impacting communities in the Langtang Valley, a popular Himalayan trekking destination. ALOS-2 maps roughly found the extent of debris from three major landslides in the area, such as the rocks and ice that buried almost the entire Langtang village.

Technology That Made It Happen

Both satellite systems used in the study make use of “synthetic aperture radar,” or SAR, a technology that allows for detailed radar imaging from space without an extremely large antenna. Like a real-aperture radar system, a SAR satellite transmits microwave signals that are reflected by Earth’s surface, and those reflections produce radar images.

A challenge for using satellites for disaster sensing is that Earth orbiters may not always be acquiring data of a hard-hit area when they pass over it. For this reason, it may take days to image the area with SAR satellites. The COSMO-SkyMed satellite acquired data in the Kathmandu area four days after the earthquake, while the ALOS-2 satellite obtained data seven days after the main shock.

Ideally, radar data would be acquired, transmitted and processed into damage proxy maps within a single day. With more planned SAR satellites on the horizon — including the NASA-ISRO Synthetic Aperture Radar, or NISAR, satellite — this is possible, researchers say.

A mapping technique similar to that used for the SAR-based damage proxy maps in Nepal was used to chart damage from Typhoon Haiyan in Southeast Asia in 2013, Hurricane Sandy in the United States’ Atlantic region in 2012, and the Christchurch earthquake in New Zealand in 2011. 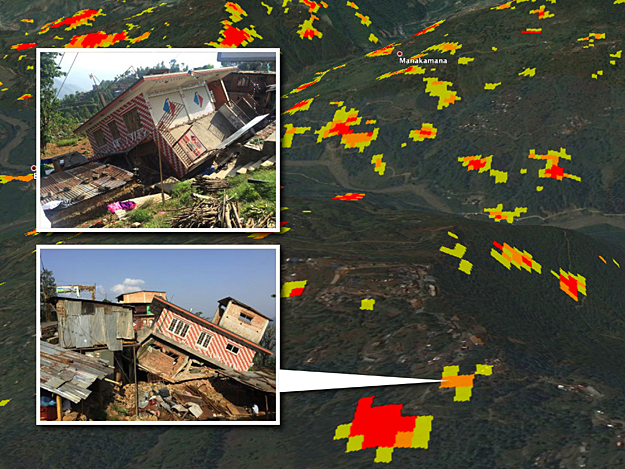 Street-level photos from locations on a mountain ridgetop in Nepal are overlaid on a damage proxy map derived from data from the ALOS-2 satellite. The color gradation represents increasingly more significant change on the ground, with red being the most severe and yellow being the least severe.Credit: NASA/JPL-Caltech/Google/DigitalGlobe/Amy MacDonald/Thornton Tomasetti Larger view

How the Maps Were Used

In several ways, the damage maps assisted with relief efforts in the aftermath of the Nepal earthquake. DigitalGlobe, a company specializing in high-resolution Earth imagery, said its crisis management team used the information in the damage proxy maps to help them decide where to collect images of affected areas.

“The damage proxy maps were used to ultimately help the team decide on these specific focus areas, as well as an input to help assign priorities for the imagery collection plan,” said Andrew Steele, senior product specialist at DigitalGlobe.

Though the maps sometimes overestimated the breadth of damaged areas, they helped the United States Agency International Development team in Nepal be better prepared with other types of information to coordinate a relief response, said Indra Sharan K.C., geographic information systems specialist for USAID in Kathmandu.

“This proxy map communicated very well the probability of damage in the early days, giving a larger perspective of the earthquake’s effect,” Sharan said.

The collaborative efforts with the National Geospatial-Intelligence Agency also helped analyses in challenging mountainous areas outside of Kathmandu. The damage proxy maps helped guide the agency’s search through vast amounts of imagery to locate pockets of damage in a very wide region.

Now that the researchers know their maps correspond well with other sources, they are working toward a faster, more efficient system of creating these rapid-response products.

“I see the red pixels as people’s beating hearts. I would like to continue developing this system to make it robust enough and rapid enough to save lives,” Yun said.