Measuring The Nepal Earthquake From Space

On 25 April, a 7.8-magnitude earthquake struck Nepal, claiming over 5000 lives and affecting millions of people. Satellite images are being used to support emergency aid organisations, while geo-scientists are using satellite measurements to analyse the effects of the earthquake on the land.
Combining two Sentinel-1A radar scans from 17 and 29 April 2015, this interferogram shows changes on the ground that occurred during the 25 April earthquake that struck Nepal. An overall area of 120×100 km has moved half of that uplifted and the other half, north of Kathmandu subsided. Vertical accuracy is a few cm. Larger image

Radar imagery from the Sentinel-1A satellite shows that the maximum land deformation is only 17 km from Nepal’s capital, Kathmandu, which explains the extremely high damage experienced in this area.

By combining Sentinel-1A imagery acquired before and after the quake, changes on the ground that occurred between the two acquisition dates lead to rainbow-coloured interference patterns in the combined image, known as an ‘interferogram’, enabling scientists to quantify the ground movement.

Sentinel-1A’s swath width of 250 km over land surfaces has allowed for an unprecedented area size to be analysed from a single scan. The entire area will be covered under the same geometry every 12 days, allowing for the wider region to be regularly monitored and fully analysed for land deformation with the powerful ‘interferometry’ technique. 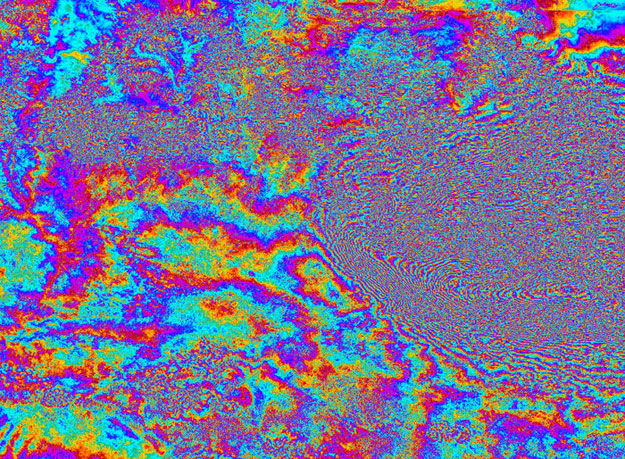 Interferogram over Kathmandu, Nepal, generated from two Sentinel-1A scans on 17 and 29 April 2015 before and after the 25 April earthquake. Each ‘fringe’ of colour represents about 3 cm of deformation. The large amount of fringes indicates a large deformation pattern with ground motions of 1 m or more. Larger image 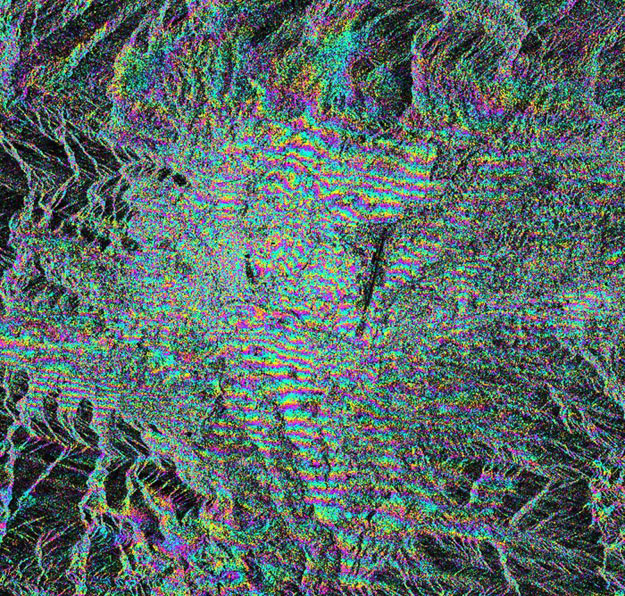 Sentinel-1A interferogram over Kathmandu, Nepal, showing deformation induced by the 25 April 2015 earthquake. Eastwest ‘fringes’ cross the city, with each coloured fringe corresponding to 2.8 cm of ground displacement (both uplift and subsidence). The interferogram combines two Sentinel-1A images from 17 and 29 April 2015. Larger image

Products ensuring a full coverage of the affected area prior to the earthquake were available to all scientists under the Copernicus free and open data policy, and will continue to be available.

Sentinel-1A is the first satellite for the Copernicus environment-monitoring programme led by the European Commission. Its all-weather, day-or-night radar imagery is particularly suited to support impact assessment for many types of geohazards. The satellite is planned to provide systematic observations of tectonic and volcanic areas at global level.

Imagery from the Sentinels and other Copernicus contributing missions are coordinated by ESA to be used by the Copernicus Emergency Management Service (EMS), which supports all phases of the emergency management cycle.

The Copernicus EMS was activated on the day the earthquake struck, prompting ESA to begin collecting satellite imagery, which is being made available to support relief efforts.

In parallel, the International Charter Space and Major Disasters was activated by India, China and the UN. Partner Agencies of this initiative have been providing data and products over the area to relief organisations. 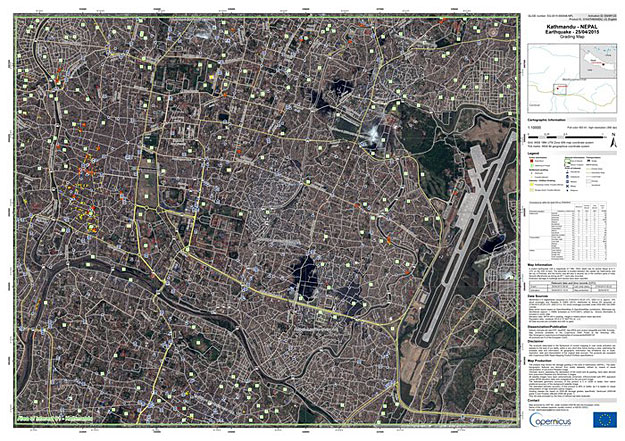 Under the Copernicus Emergency Management Service, ESA has been coordinating the collection of optical satellite imagery following the earthquake that struck Nepal on 25 April 2015. The satellite imagery is then used to create maps to support relief efforts, such as this ‘grading map’ of Kathmandu showing topographic features and crisis information. The map is based on imagery from the WorldView-3 satellite acquired on 28 April. Larger image