Optical, radar and laser observations of the Envisat satellite show that it is still in a stable orbit. Efforts to regain contact with the satellite have been under way since 8 April, when it unexpectedly stopped sending data to Earth.
Image: On 15 April, the French space agency CNES rotated the Pleiades Earth observation satellite to capture this image of Envisat. At a distance of about 100 km, Envisat’s main body, solar panel and radar antenna were visible.

To determine if Envisat has entered its ‘safe mode’ – which would be a starting point for revival – the recovery team is drawing on every information source available.

Valuable help is coming from many European and international partners. France’s new Pleiades satellite normally provides very high-resolution images of Earth, but is now focusing on Envisat to shed more light on the situation.

On 15 April, the French space agency CNES turned Pleiades to capture images of Envisat passing within about 100 km. This remarkable feat was possible thanks to the exceptional agility of Pleiades. Flight specialists and engineers are using the images to determine the orientation of Envisat’s solar panel – the satellite’s power source.

If the panel is in a suitable position for sufficient exposure to the Sun, enough power is being generated to put Envisat into safe mode, and could allow for re-establishing communications with Earth.

“We are really grateful to CNES for offering to acquire images of Envisat using their Pleiades and Spot satellites,” said Volker Liebig, ESA’s Director of Earth Observation Programmes.

“Additional observations being acquired across the globe show how the international space community has come together to track this veteran satellite.”

“These unique images will enable us to analyse Envisat’s orientation, which will indicate whether we are able to regain contact with the satellite,” said Manfred Warhaut, Head of ESA’s Mission Operations Department. 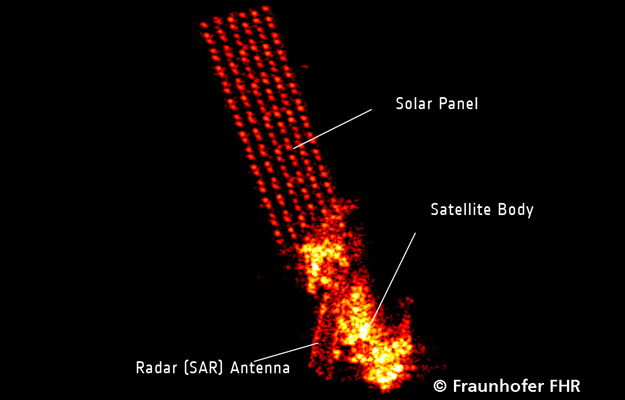 This radar image showing the Envisat satellite in orbit was produced by the ground-based tracking and imaging radar, TIRA, of the Fraunhofer Institute for High Frequency Physics and Radar Techniques in Wachtberg, Germany, on 10 April 2012.

Information on Envisat’s orbit is being provided by the US Joint Space Operations Center. In addition, multiple laser ranging stations on the ground are providing information to verify the stability of the satellite’s orbit.

The sudden interruption of Envisat services has disrupted data provision to the international Earth observation user community, which relies on data continuity.

The launch of the upcoming Sentinel series being developed for Europe’s Global Monitoring for Environment and Security (GMES) programme has become even more urgent.

The Sentinels will provide the data needed for information services to improve the management of the environment, understand and mitigate the effects of climate change and ensure civil security.