Fireworks of Blue Lightning and Gamma Rays Above Thunderclouds

After only one year in space, the Atmosphere-Space Interactions Monitor (ASIM) on the International Space Station has given researchers a new understanding of how lightning is created, and how thunderstorms can affect the atmosphere and the climate.
The first measurements from the facility that is flying 400 km above Earth outside Europe’s Columbus laboratory, reveal how so-called ‘terrestrial gamma-flashes’ form in the atmosphere. The flashes occur in connection with lightning and thunder storms and are short bursts of high-energy x- and gamma- rays.

Researchers in the science team have also received unprecedented measurements showing a wealth of blue lightning above thunderclouds.

The discoveries were published at a European Geosciences Union conference in Vienna today. In following papers this year researchers will describe in more detail how lightning creates terrestrial gamma-flashes, that were first discovered in 1993.

“We are seeing new things and have gained so much knowledge on the internal anatomy of lightning. Besides the terrestrial gamma-flashes our recordings show lots of blue lightning that spread like fireworks above thunderclouds. It looks crazy,” says Torsten Neubert, lead scientist for the ASIM project at DTU Space working with scientists from the University of Bergen, Norway, and the University of Valencia, Spain.

“The International Space Station is an ideal place to monitor these kind of phenomena as it orbits relatively low over our planet and covers areas where thunderstorms are common,” says ESA’s Astrid Orr, “the results are exciting as we are learning new things about our planet.”

Andreas comments: “ASIM is an excellent example of the exciting and important research we carry out aboard the International Space Station. Research that will contribute with new knowledge about our world. Filming the blue lightning was undoubtedly one of the highlights of my mission in 2015.”

For the past six months, Danish company Terma, who heads the technical part of the project, has completed an upgrade of the software that controls ASIM’s two main instruments. The Modular X- and Gamma-ray Sensor is complemented by the Modular Multi-spectral Imaging Array that consists of two cameras and three photometers that detect flashes of light at different wavelengths.

“The updates will offer the researchers better measurements, because the instruments have become more sensitive in relation to capturing gamma radiation and gigantic lightning above the clouds. It will also improve the time accuracy between the two instruments to better than ten millionths of a second, which again will improve the analysis of the signals from the many sensors,” says project manager Ole Hartnack from Terma.

“We have worked for over 14 years developing and building ASIM – to see results coming in so soon that are beyond expectations is amazing to be a part of” says Nikolai Ostgaard, scientist from the University of Bergen.

There are larger plans for future of ASIM too, the science team is considering using the observatory to study aurora and meteors over Earth in years to come. 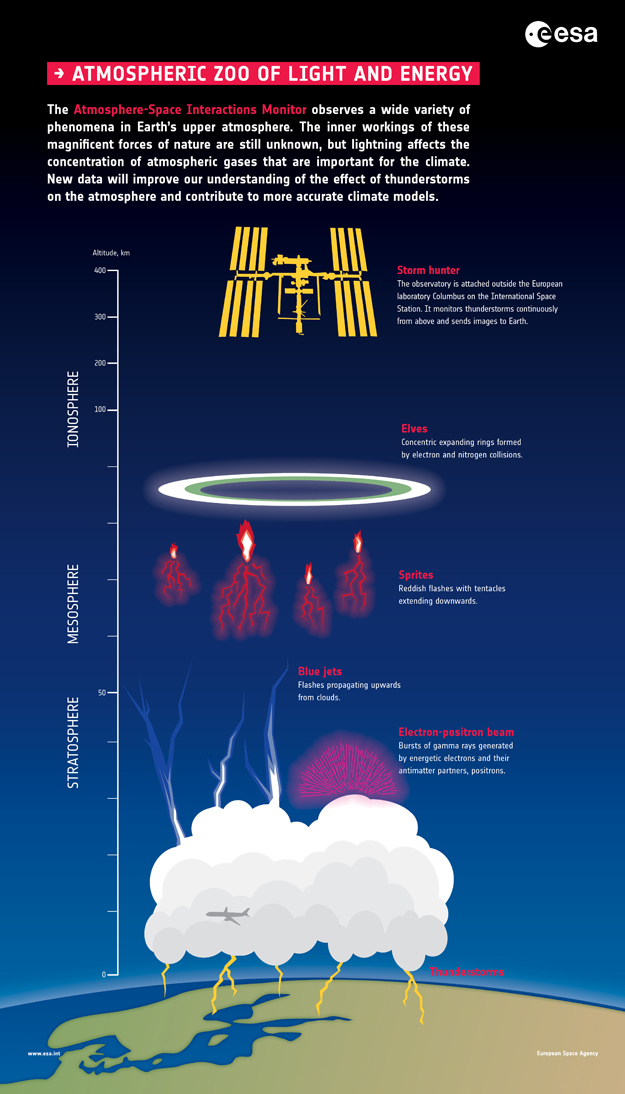