The Copernicus Sentinel-2 mission takes us over Zeeland – the westernmost province in the Netherlands.
Located around 150 km from Amsterdam, Zeeland consists of a complex system of islands, peninsulas and waterways. It also comprises Zeeuwsch-Vlaanderen – a strip of the Flanders mainland between the Western Scheldt (Westerschelde) and Belgium.

The province of Zeeland lies on the large river delta at the mouth of several rivers, like the Scheldt (Schelde) and Meuse (Maas) rivers. The lighter aqua colours in the image depict the shallow waters of the delta with riverbeds and several sandbanks visible. The brown coloured waters indicate a higher sediment content, which contrasts with the darker waters of the North Sea. 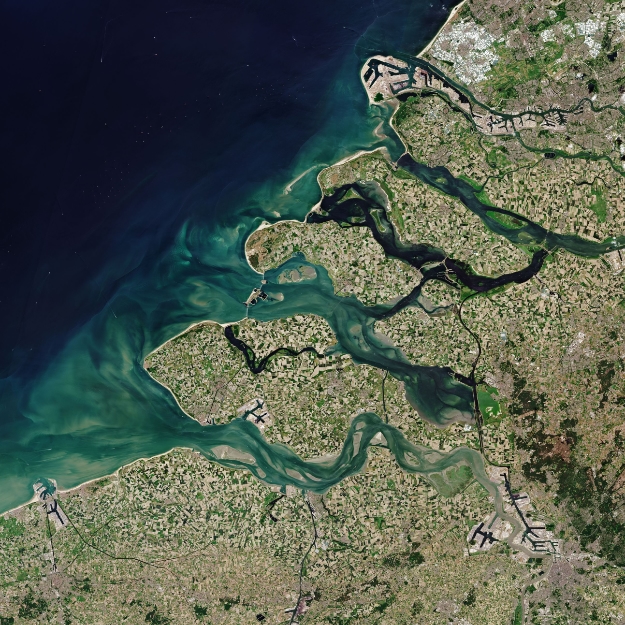 Zeeland is one of the main agricultural provinces in the Netherlands with one of the largest areas of arable farmland. The patchwork of agricultural fields visible on the islands and mainland show the fields in the various stages of growth or harvest. The area supports cereals, potatoes, beets, cattle and horticulture.

Large parts of Zeeland, which translates to ‘sea land,’ lie below sea level. The province was the site of a deadly flood in 1953 brought on by a combination of high spring tides and a strong windstorm that severely damaged the low-lying coastal region.

As a result, the Dutch government began to implement the Delta Project – an elaborate system of dykes, canals, dams and bridges to hold back the North Sea. In this image, the 9km-long Eastern Scheldt Storm Surge Barrier (Oosterscheldekering) is visible between the islands of Schouwen-Duiveland and Noord-Beveland.

Since sea-level rise is a key indicator of climate change, accurately monitoring the changing height of the sea surface over decades is essential for climate science, for policy-making and, ultimately, for protecting the lives of those in low-lying regions at risk.

The Copernicus Sentinel-6 Michael Freilich satellite, set to launch in November, is the first of two identical satellites to be launched sequentially to provide accurate measurements of sea level change.

Both satellites will reach 66°N and 66°S – a specific orbit occupied by the earlier missions that supplied the reference sea-surface height data over the last three decades. This orbit will allow for 95% of Earth’s ice-free ocean to be mapped every 10 days.

This image, acquired on 30 May 2020, is also featured on the Earth from Space video programme.