On 22 April 2021, on Earth Day, Thomas Pesquet is planned to return to the International Space Station for his second mission, Alpha.
Ahead of his launch, the Copernicus Sentinel-2 mission takes us over Cape Canaveral, USA, in a region known as the Space Coast.

Cape Canaveral is a cape and city in Brevard County, in east-central Florida. The cape is separated from the mainland by the Banana River, Merritt Island and the Indian River from east to west.

The cape area is part of the region known as the Space Coast, and is home to the Kennedy Space Center – including the space shuttle landing facility, a visitor’s centre, Cape Canaveral Space Force Station and a space vehicle assembly building. Launch Complex 39A, visible along the coast, is where the Saturn V rocket carrying Apollo 11 began its voyage to the moon in 1969, carrying Neil Armstrong, Michael Collins, and Edwin ‘Buzz’ Aldrin. 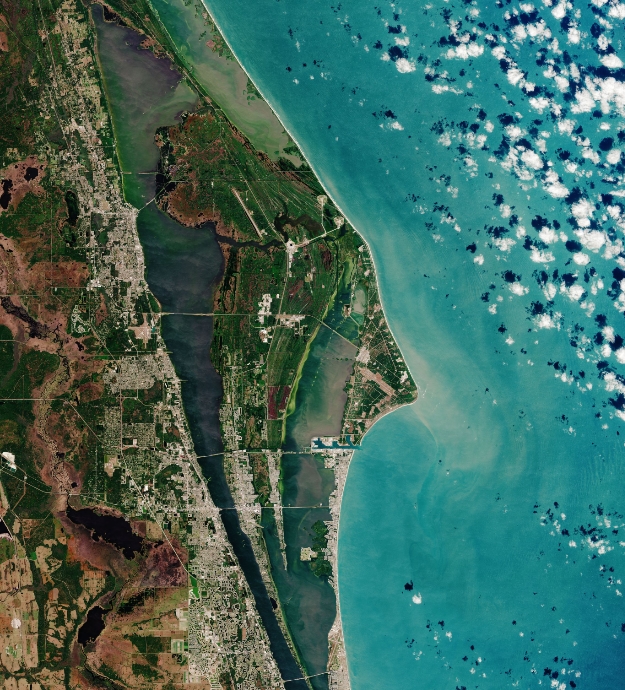 Before the space programme was launched, Cape Canaveral was a stretch of barren, sandy scrubland. The cape was chosen for rocket launches owing to its close proximity to the equator. As the linear velocity of Earth’s surface is greatest towards the equator, the southerly location of the cape allows for rockets to take advantage of this by launching eastward – in the same direction as Earth’s rotation.

The space centre is included in the Merritt Island National Wildlife Refuge, visible in the top of the image, which occupies more than 550 sq km of estuaries and marshes. It preserves the habitat of around 1000 plant and 500 wildlife species, included several endangered species. The city of Cape Canaveral lies just south of the space centre and around 8 km north of Cocoa Beach (visible in the bottom of the image).

It is from here where French ESA astronaut Thomas Pesquet will be launched on his second mission to the International Space Station. Thomas will be the first ESA astronaut to fly on a SpaceX Crew Dragon launching on a Falcon 9 rocket, together with NASA astronauts Shane Kimbrough and Megan McArthur and JAXA astronaut Akihiko Hoshide. He will be the first European to launch from the US since 2011, when Roberto Vittori, from Italy, flew onboard space shuttle Endeavour to deliver the Alpha Magnetic Spectrometer.

During his six-month mission, called Alpha, Thomas will spend much of his time on scientific research and will also be carrying out maintenance tasks as part of the station’s crew. Towards the end of his mission, he will serve as commander of the Station. He will be the fourth European to hold the post of commander, after ESA astronauts Frank De Winne, Alexander Gerst and Luca Parmitano.

This image, captured on 2 February 2021, is also featured on the Earth from Space video programme.