The Copernicus Sentinel-3 mission captured this impressive, wide-angled view of Patagonia at the southern end of South America, as well as the Falkland Islands (Malvinas).
Covering an area of around 673 000 sq km, Patagonia is split by Argentina and Chile. The region comprises the southern section of the Andes Mountains, with lakes, fjords, rainforests and glaciers in the west and deserts and tablelands to the east. 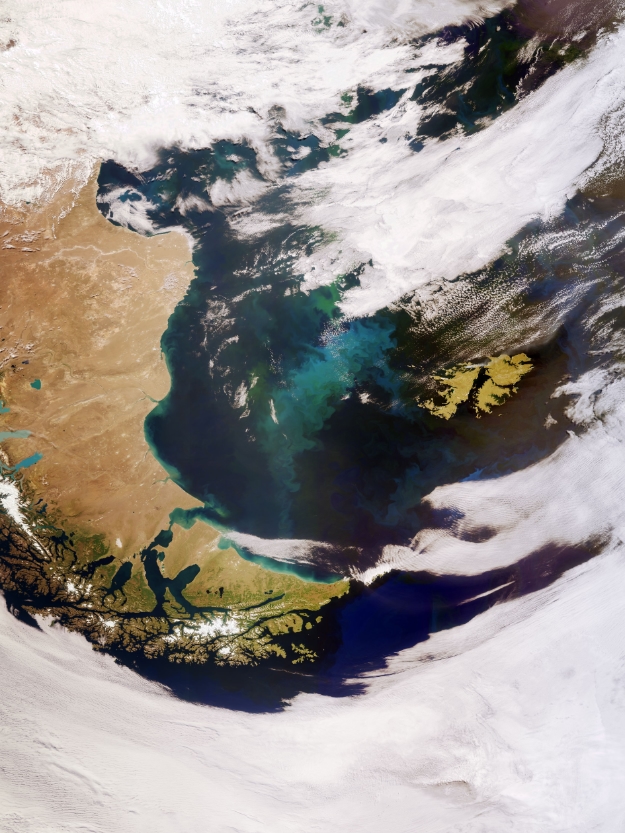 Part of the Alberto de Agostini National Park can be seen in the bottom of the image. The park features a highly irregular coastline, which is deeply indented by fjords. Deemed a designated UNESCO Biosphere Reserve, the park has several tidewater glaciers and comprises the Gordon, Cook and Londonderry islands.

The Falkland Islands can be seen in the far-right of the image. The islands lie in the South Atlantic Ocean, around 600 km east of Patagonia. The Falklands comprise two main islands, West Falkland and East Falkland, which are separated by the Falkland Sound – a channel that averages around 20 km in width.

The swirling green and blue coloured areas are densely concentrated phytoplankton blooms. These microscopic organisms thrive in the cool, nutrient-rich waters between the coast of southern Argentina and the Falkland Islands. Nutrients carried by rivers promote phytoplankton growth, which may explain the plankton hugging the South American coastline in the image, as well as dust carried from Patagonia offshore which is then diffused on the ocean surface by strong westerly winds.

In spring and summer, populations of algae in the South Atlantic often explode into enormous blooms – which float with the meandering ocean currents. Carrying a suite of cutting-edge instruments, Copernicus Sentinel-3 measures systematically Earth’s oceans, land, ice and atmosphere to monitor and understand large-scale global dynamics.

Sentinel-3 measures the temperature, colour and height of the sea surface as well as the thickness of sea ice, while over land maps land, provides indices of vegetation state and measures the height of rivers and lakes.