New Delhi, the capital and second-largest city of India, is featured in this image captured by the Copernicus Sentinel-2 mission.
New Delhi is situated in the north-central part of the country and lies within the massive metropolitan area of Delhi, India’s capital territory. To the east, Delhi is bounded by the state of Uttar Pradesh, and to the north, west and south it is bounded by the state of Haryana.

Delhi’s urban area consists of the historical city of Old Delhi in the north, New Delhi in the south and now also includes the nearby cities of Ghaziabad, Faridabad, Gurugram and Noida. From space, these cityscapes together appear light grey in tone.

New Delhi sits, primarily, on the west bank of the Yamuna River, visible in black in the right of the image. One of the country’s most sacred rivers, the Yamuna is a tributary of the Ganges River, located around 160 km south of the Himalayas. 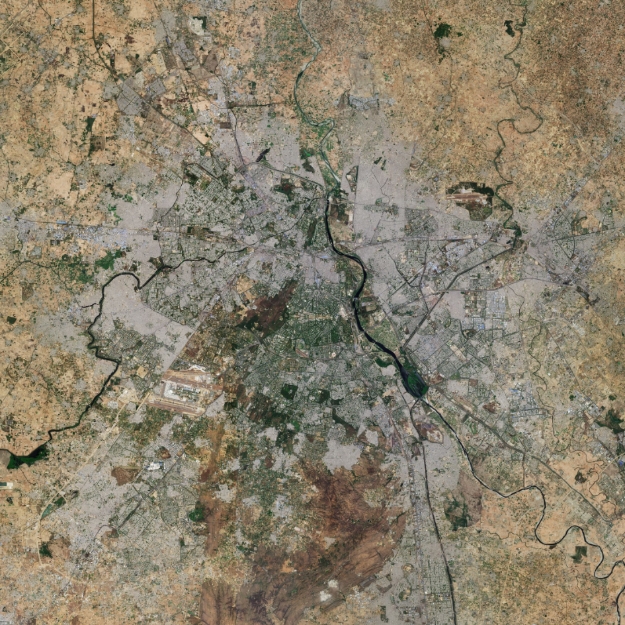 New Delhi, the government, commercial and financial centre of India, is considered one of the fastest growing cities in the country and in the world. The straight and diagonal pattern of the broad, tree-lined avenues in New Delhi, which features extensive green spaces, makes it appear as a darker-toned region and contrasts with the narrower, winding streets of Old Delhi.

The city is dotted with numerous museums, monuments, botanical gardens, places of worship and cultural buildings including the Hindu Akshardham Temple.

Other notable features in the image include Indira Gandhi International Airport visible in the left, and Hindon Airport to the right. Some perfectly squared plots of land can be seen in the image, particularly in the west side of the city.

As well as providing detailed information about Earth’s vegetation, Copernicus Sentinel-2 is designed to play a key role in mapping differences in land cover to understand the landscape, map how it is used and monitor changes over time. As cities continue to expand, Sentinel-2 can also be used to track urban expansion and assist urban planners.