The Copernicus Sentinel-1 mission takes us over the Mackenzie River, a major river system in the Canadian boreal forest.
Its basin is the largest in Canada and is the second largest drainage basin of any North American river, after the Mississippi.

The Mackenzie River flows through a vast region of forest and tundra through the Northwest Territories from the Great Slave Lake to the Beaufort Sea in the Arctic Ocean. Its delta covers an area around 12 000 sq km, measuring more than 190 km from north to south and is around 80 km wide along the Arctic shore. The maze of branching and intertwining channels is dotted with numerous lakes and ponds.

This wintery, radar image combines three radar acquisitions from the Copernicus Sentinel-1 mission to show changes in land and water surfaces between three acquisition dates: 18 November 2019, 5 December 2019 and 10 January 2020. In the top of the image, parts of the frozen Arctic Ocean can be seen. The different colours are due to the movement and cracking of sea ice between the acquisition dates.

The landscape pictured here is very typical for these latitudes, with the whole region subject to a harsh winter climate. Many of the lakes are frozen during the winter months, with the exception of some of the lakes visible in black in the centre of the image, which are ice-free. One of the lakes appears red most likely due to new ice which has formed between image acquisitions. 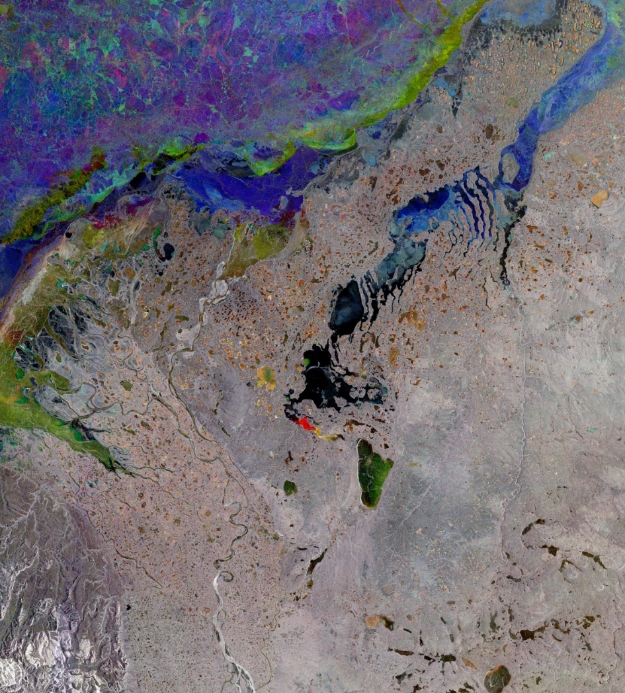 Around 75% of the Mackenzie basin sits within a permafrost area. Permafrost, ground which remains completely frozen for at least two consecutive years, is common in high latitude regions. With increasing temperatures causing permafrost to thaw, it not only releases methane and carbon dioxide into the atmosphere, but it can cause erosion, flooding and landslides.

Satellite data can be used to map permafrost, even in remote and inaccessible areas such as the Mackenzie River delta. The maps, using data from ESA’s Climate Change Initiative, are the longest, satellite-derived permafrost record currently available.