The Copernicus Sentinel-1 mission takes us over the archipelago of Lofoten in northern Norway.
Extending around 175 km from north to south, the archipelago comprises five main islands (Austvågøya, Gimsøya, Vestvågøya, Flakstadøya, and Moskenesøya), as well as many small islands and skerries (rocky islets and reefs). Lofoten is known for its distinctive scenery, with dramatic mountains and peaks, sweeping beaches, deep blue fjords and sheltered bays.

Svolvær, the chief town and port of the Lofoten island group, is located on the southern coast of Austvågøya, the easternmost island of the archipelago. The economy largely depends on cod fisheries, with the town’s population swelling during the spawning season as fishermen flock in. The fjord of Vestfjorden lies between the archipelago and the mainland. 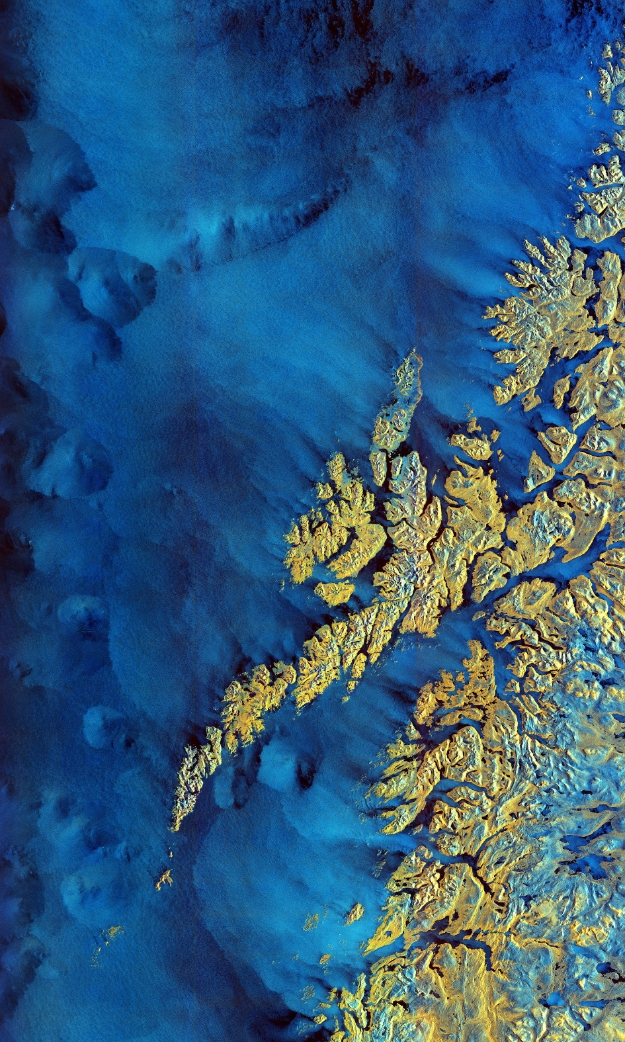 Although lying entirely within the Arctic Circle, Lofoten experiences one of the world’s largest elevated temperature anomalies relative to its high latitude. Due to a convergence of the Gulf Stream with two underwater currents, the North Atlantic Current and the Norwegian Current, the weather in Lofoten remains anomalously warm.

The colours of this week’s image come from the combination of two ‘polarisations’ from the Copernicus Sentinel-1 mission which have been converted into a single image. This remote sensing technique allows us to detect where differences between the polarisations are higher. These differences are visible in shades of blue in the image, such as the choppy Norwegian Sea, wetlands and mires such as those on the northern tip of Andøya and wet snow on hilltops and in mountains (bottom-right corner of the image).

What appears in yellow indicates what has fewer differences between polarisations, such as forests and other vegetated land, as well as built-up areas.

Sentinel-1 is a radar mission and unlike optical cameras, the images are usually black and white when they are received. By using a technology that aligns the radar beams sent and received by the instrument in one orientation – either vertically or horizontally – the resulting data can be processed in a way that produces coloured images such as the one featured here. This technique allows scientists to better analyse Earth’s surface. For more information on polarimetry, click here.