Part of Lake Nasser, one of the largest artificial lakes in the world, is featured in this false-colour image captured by the Copernicus Sentinel-2 mission.
Lake Nasser, visible in the lower-right in black, is a vast lake and reservoir located in southern Egypt and northern Sudan. The lake was created as a result of the construction of the Aswan High Dam across the waters of the Nile in the late-1960s. This ambitious project was designed to provide irrigation to new agricultural developments and attract people to the region.

The dam is located around 200 km northeast of the area pictured here and cannot be seen. The dam impounds floodwaters from the Nile, releasing them when needed to maximise their utility on irrigated land, to water hundreds of thousands of hectares of land downstream, but also in the nearby area. The dam also helps improve navigation through Asw?n and generates an enormous amount of hydroelectric power. The lake covers a total surface area of 5250 sq km, yet is relatively shallow with an average depth of 25 m.

The ancient Egyptian temple of Abu Simbel laid in the path of the rising waters produced by the dam, resulting in the relocation of the temple complex. In the 1960s, the historical site was taken apart piece by piece and reassembled in a new location to avoid submersion. Although the resolution of the image doesn’t allow us to see the temple in detail, the town of Abu Simbel and its airport can be spotted at the bottom of the image, close to several plantations seen in red. 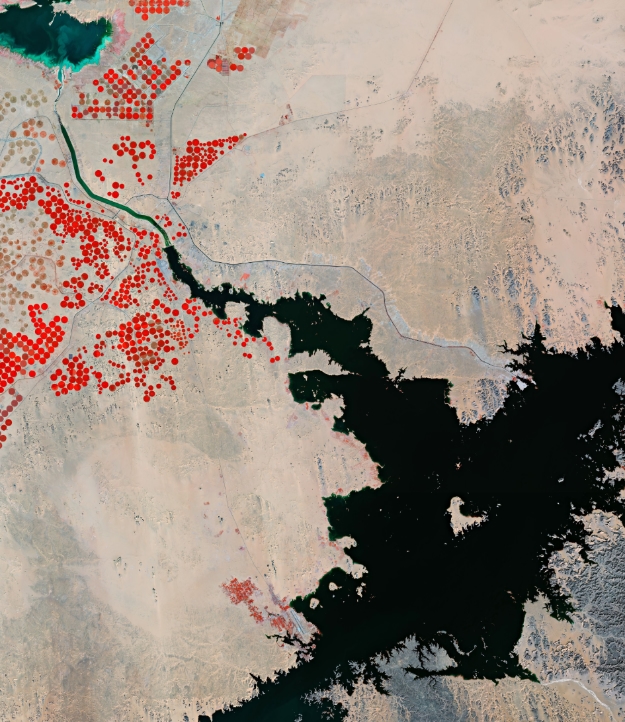 Part of the Toshka Lakes, natural depressions that are filled by overflow from Lake Nasser, can be seen in the top-left of the image. These endorheic lakes were created in the 1980s and 1990s by the diversion of water from Lake Nasser through the manmade canal visible in green in the image.

The rise and fall of the lakes depend on multi-year fluctuations in water flow from the Nile. From 2012 to 2018, the lakes had shrunk significantly, leaving only small remnants of water in the basins. Summer rainfall in Sudan in 2019 and record-breaking floods in 2020, resulted in the rapid filling of the lake’s waters. The lakes are relatively salty, with visible signs of eutrophication and algae formation.

This image is a false-colour composite and was created by utilising the near-infrared channel from Copernicus Sentinel-2 to emphasise the scarce vegetation in the area. This helps identify the presence of pivot irrigation fields, visible as circular shapes in the image, with the largest having a diameter of around 750 m.

Pivot irrigation systems work where watering equipment rotates around a fixed water supply point and crops are watered with sprinklers. This type of irrigation helps farmers manage their watering demands and helps conserve their water sources.