The Copernicus Sentinel-3 mission takes us over the Japanese archipelago – a string of islands that extends about 3000 km into the western Pacific Ocean.
While the archipelago is made up of over 6000 islands, this image focuses on Japan’s four main islands. Running from north to south, Hokkaido is visible in the top right corner, Honshu is the long island stretching in a northeast-southwest arc, Shikoku can be seen just beneath the lower part of Honshu, and Kyushu is at the bottom.

Honshu’s land mass comprises approximately four-fifths of Japan’s total area. Honshu’s main urban areas of Tokyo, Nagoya, and Osaka are clearly visible in the image. The large grey area in the east of the island, near the coast, is Tokyo, while the smaller areas depicted in grey are the areas around Nagoya and Osaka.

Honshu is also home to the country’s largest mountain, Mount Fuji. A volcano that has been dormant since it erupted in 1707, Mount Fuji is around 100 km southwest of Tokyo and its snow covered summit can be seen as a small white dot. 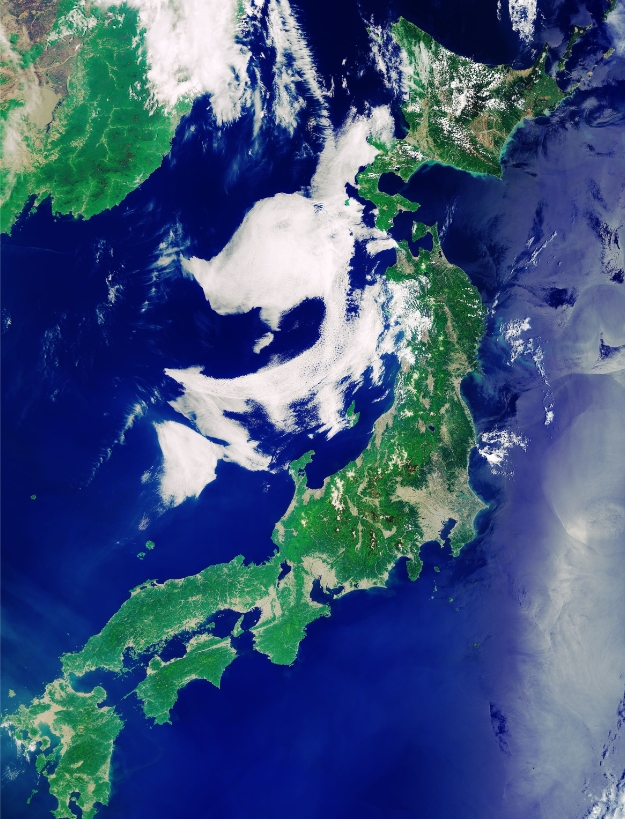 The Sea of Japan, also referred to as the East Sea, (visible to the west of the archipelago) separates the country from the east coast of Asia. The turquoise waters surrounding the island of Hokkaido can be seen at the top of the image, while the waters in the right of the image have a silvery hue because of sunglint – an optical effect caused by the mirror-like reflection of sunlight from the water surface back to the satellite sensor.

Sentinel-3 is a two-satellite mission to supply the coverage and data delivery needed for Europe’s Copernicus environmental monitoring programme. Each satellite’s instrument package includes an optical sensor to monitor changes in the colour of Earth’s surfaces. It can be used, for example, to monitor ocean biology and water quality.

This image, which was captured on 24 May 2019, is also featured on the Earth from Space video programme.