The Copernicus Sentinel-3 mission takes us over the Ganges Delta – the world’s largest river delta.
Covering an area of around 100 000 sq km, the Ganges Delta lies in both Bangladesh and the State of West Bengal in India. The delta is formed mainly by the large, sediment-laden waters of the Ganges and Brahmaputra rivers.

The Ganges river carries fertile soil and nutrients, which it deposits across its vast delta floodplain. The river flows for over 2400 km from the Himalayas before emptying into the Bay of Bengal – the world’s largest bay. It is here where the murky coloured waters mix with the darker coloured waters of the Indian Ocean. 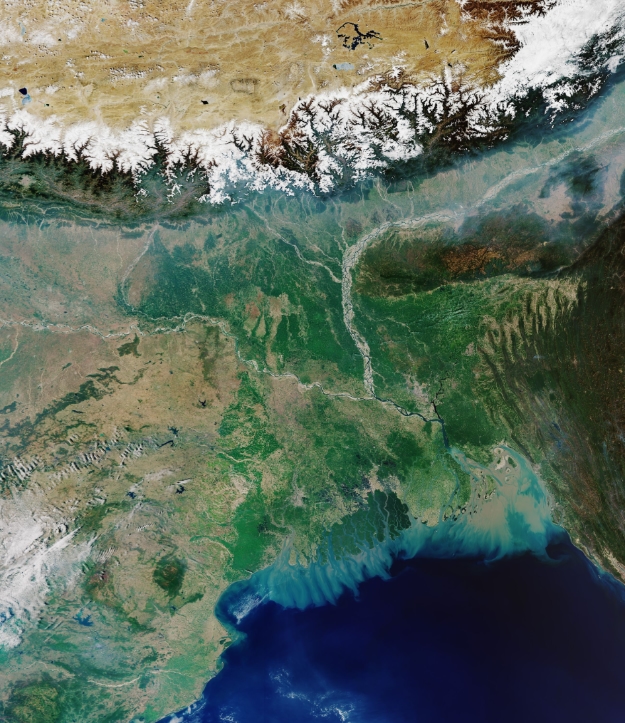 The delta is largely covered with a swamp forest, known as the Sundarbans, and can be seen in dark green near the coast with several rivers snaking through it. The Sundarbans, which translates as ‘beautiful forest’ in Bengali, are the world’s largest mangrove forest and provide a critical habitat for numerous species, including the Bengal tiger and the Indian python.

The city of Kolkata (formerly Calcutta) is visible near the Sundarbans in the lower-centre of the image. With over 14 million inhabitants, Kolkata is one of India’s largest cities and is the dominant urban centre of eastern India. Dhaka, the capital of Bangladesh, can be seen in the lower-right of the image, just north of the Buriganga river. Dhaka is Bangladesh’s most populous city and is one of the largest metropolises in South Asia.

With a population of over 100 million people, the delta is one of the most densely populated deltas in the world and is extremely vulnerable to climate change. The residents of this region are particularly at risk from repeated catastrophic floods due to heavy runoff of meltwater from the Himalayas, intense rainfall during the monsoon season and from accelerated sea-level rise exacerbated by land subsidence.

Sea-level rise is a global issue, but regional differences in sea-level rise put some places at risk more than others. In the coming decades, Asia is likely to feel the worst effects because of the number of people living in low-lying coastal regions. Bangladesh, India, China, Vietnam, Indonesia and Thailand are home to the greatest number of people who today live on land that could be threatened by permanent inundation by 2100.

It is vital that the changing height of the sea surface continues to be closely monitored over the coming decades. Set to launch next month, the Copernicus Sentinel-6 mission will be key in undertaking this important role until at least 2030. Renamed in honour of the former director of NASA’s Earth Science Division, the Copernicus Sentinel-6 Michael Freilich satellite is the first ESA-developed satellite to be given a ride into space on the SpaceX Falcon 9 rocket, the world’s first orbital class reusable rocket.

Since the satellite arrived at Vandenberg in California on 24 September, it has been transferred to the SpaceX Payload Processing Facility, unpacked and undergone a series of tests to make sure all will be well during the rigours of liftoff and during its five-plus years in orbit around Earth.

This image, captured on 31 March 2020, is also featured on the Earth from Space video programme.