With Easter right around the corner, we take a look at four egg-shaped buildings visible from space as captured by the Copernicus Sentinel-2 mission.
Eggs are an ancient symbol of new life, associated with pagan festivals celebrating spring. Decorating eggs for Easter is a tradition that dates back to the 13th century. One explanation suggests that eggs were formerly a forbidden food during Lent, so people would decorate them to mark the end of penance and fasting, and eat them on Easter as a celebration.

The appetite for eggs is also apparent in modern-day architecture and design. In recent years, several egg-shaped structures have popped up in cities across the world. Here are just a few visible from space.

In the top-left image, the AT&T Stadium in Arlington, Dallas, US, is visible. The stadium serves as the home of the Dallas Cowboys of the National Football League (NFL), but it is also used for a variety of other activities including concerts, basketball and football games. The stadium seats 80 000, making it the fourth largest stadium in the NFL by seating capacity. Once known for its cotton ginning and agriculture, Arlington is primarily an industrial and commercial centre.

In the top-right, the Beijing South Train Station in the Fengtai District, Beijing, can be seen. The station is one of the city’s largest stations, and is one of the largest in Asia. It serves as the terminus for high-speed trains on the Beijing-Tianjin intercity railway and Beijing-Shanghai high-speed Railway which can reach speeds up to 350 km/h.

The station was built from more than 60 000 tonnes of steel and more than 490 000 cubic metres of concrete. To understand the enormity of the station, the main hall in the centre is big enough to accommodate a Boeing 747 aircraft, and the covered surface area of the roof is about the size of 20 football fields. 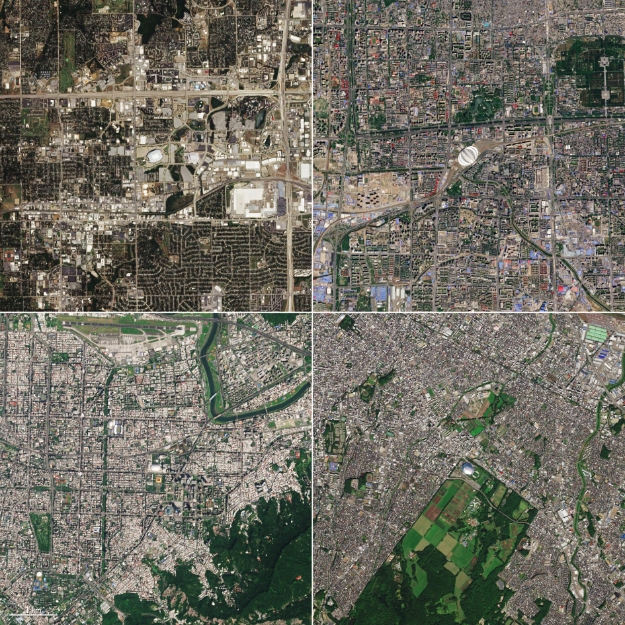 In the bottom-left, the Taipei Dome, also known as the Farglory Dome, can be seen. The stadium is currently under construction in Xinyi, Taipei, Taiwan. Once completed, the stadium will be used mostly for baseball games, as well as other sporting events and commercial facilities.

In the bottom-right, the Sapporo Dome stadium in Sapporo, Hokkaido Island, Japan, is visible. Primarily used for baseball and football games, the stadium is the home field of the Hokkaido Nippon-Ham Fighters baseball team and the Hokkaido Consadole Sapporo football club.

The stadium is equipped with a system that switches between two entirely different surfaces depending on which sport is being played. Baseball games are played on an underlying turf field, while football games are held on a grass pitch that slides in and out of the stadium as needed.

The stadium is one of the planned venues for this year’s Summer Olympics and was previously a venue of the 2002 FIFA World Cup.

Copernicus Sentinel-2 is a two-satellite mission. Each satellite carries a high-resolution camera that images Earth’s surface in 13 spectral bands. The mission is mostly used to track changes in the way land is being used and to monitor the health of our vegetation.

This image is also featured on the Earth from Space video programme.