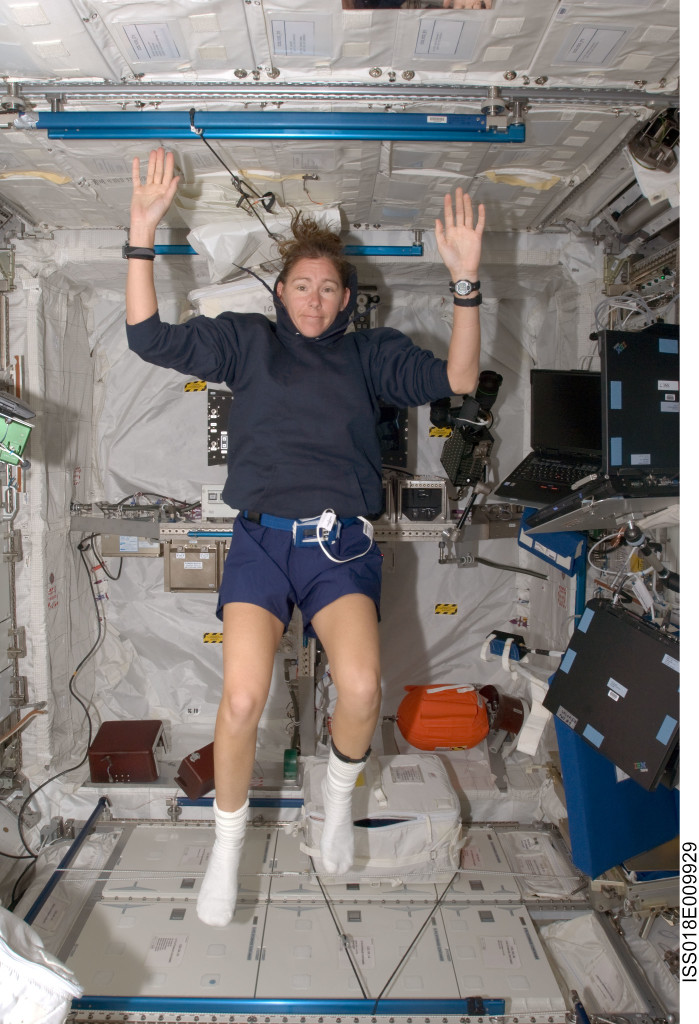 Gravity exerts a force on the body that sets up a hydrostatic gradient, effectively lowering blood pressure when blood is pumped up to the head when sitting or standing, but increasing blood pressure with distance below the heart. At the level of the eyes or the middle of the brain, blood pressure is reduced about 30 mmHg from what it was as it left the heart. So, if someone's blood pressure was 120/80 at the heart, it would be 90/50 at the brain. When we lie in bed at night, or when an astronaut goes into space, gravity's effect is removed and blood pressures remain closer to 120/80 throughout the arterial system.

Normally, effective reflex responses allow the body to maintain this level of blood pressure even with posture change. There is, though, always some reduction in arterial blood pressure when we move to upright posture. Some people experience greater drops that are referred to as orthostatic hypotension, but reflex increases in heart rate and constriction of blood vessels in the lower regions of the body, in combination with a dilation of blood vessels in the brain, keeps most people from experiencing dizziness.

However, the human body quickly adapts to changes in gravity's effects. Our very first space physiology experiment almost 30 years ago used four hours of slight head-down bed rest as a simulation of the effects of spaceflight on the cardiovascular system. Head-down tilt shifts blood in a similar way to what we see as puffy faces of astronauts. After four hours of this spaceflight analog, we moved the subjects to an upright posture, but had to stop the tilt test in less than 10 minutes for six of eight healthy, young volunteers, because they had symptoms indicating they were about to faint {Butler, 1991}. These observations got us thinking about the importance of daily posture transitions and how spaceflight might upset normal cardiovascular control of arterial blood pressure. 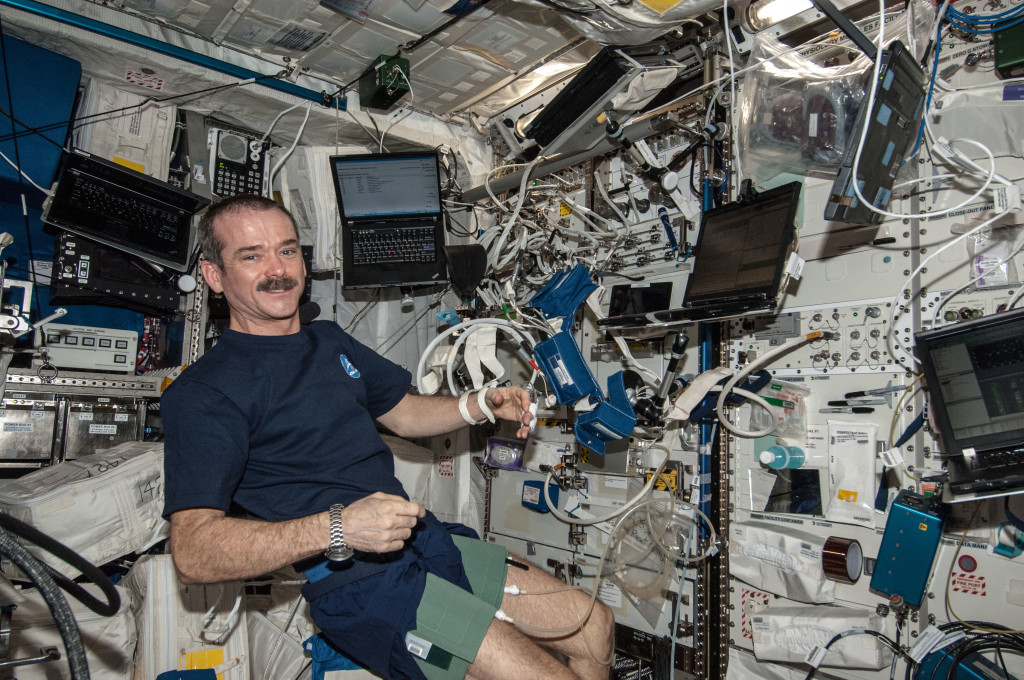 The first report of post-spaceflight orthostatic intolerance was in 1962 after a nine-hour spaceflight in the Mercury program. After the nine, 14-day Spacelab Life Sciences missions, 64% of astronauts had orthostatic intolerance. The first report of orthostatic responses after long-duration spaceflights to ISS revealed that five of six astronauts were intolerant during a post-flight stand test. As well, questions were raised about cardiovascular deconditioning occurring in space, with reductions reported in the arterial baroreflex response. Thus, when we proposed the CCISS study in 2001, there was strong reason to believe that orthostatic intolerance was a major problem with long-duration spaceflight and that a critical evaluation of mechanisms was appropriate. We conducted some detailed investigations pre- and post-flight, and inflight we measured resting arterial baroreflex responses. The CCISS experiments were the first to use 24-hour activity and heart rate monitoring to confirm that astronauts indeed have greatly reduced energy expenditure during their daily routines. We were able to state that cardiovascular reflex responses were not reduced during long-duration missions on ISS, but there was a reduction in the baroreflex response measured in a sitting position about 24-hours after return to Earth, and this reduction was quite large in about one-half of the astronauts. Overall, it seemed that the countermeasures employed by the astronauts during flight were sufficient to maintain cardiovascular stability inflight, but blood pressure wasn't fully protected post-flight, and there was concern about dizziness or fainting in some astronauts.

The arterial baroreflex studied during CCISS is only one aspect of cardiovascular function and health that can be affected by spaceflight. Removal of gravitational challenges and overall physical inactivity in spaceflight can result in wide-ranging consequences, collectively called "cardiovascular deconditioning." A key descriptor is physical fitness, or maximal oxygen uptake (VO2max), that is determined in large part by the pumping ability of the heart as well as blood flow distribution to the working skeletal muscles. Reduced VO2max and peak power output during and for 10-days after flight has been confirmed in a recent investigation on the International Space Station {Moore, 2014}.

Other key elements of vascular health include arterial stiffness, the ability of blood vessels to dilate in response to the stimulus of increased blood flow, and cardio-metabolic health, which is defined by blood glucose regulation. Together, these effects of spaceflight can be viewed as accelerated "aging-like" changes in the cardiovascular system, raising concern that they might promote development of atherosclerosis. In 2004, we proposed the study "Cardiovascular health consequences of long-duration spaceflight", known simply as Vascular, and recently we published some exciting findings from this study.

The project Vascular was the first to investigate changes in stiffness of the carotid artery. We hypothesized that this artery would be stiffer after spaceflight because of its chronic exposure to elevated arterial pressure without the daily effect of gravity reducing blood pressure in the head and neck. Also, the overall reduction in daily activity levels without gravity might contribute, as we know that on Earth, sedentary lifestyles are associated with stiffer arteries. On Earth, increased arterial stiffness with aging is very strongly associated with greater risk for major cardiovascular events, kidney disease and dementia. 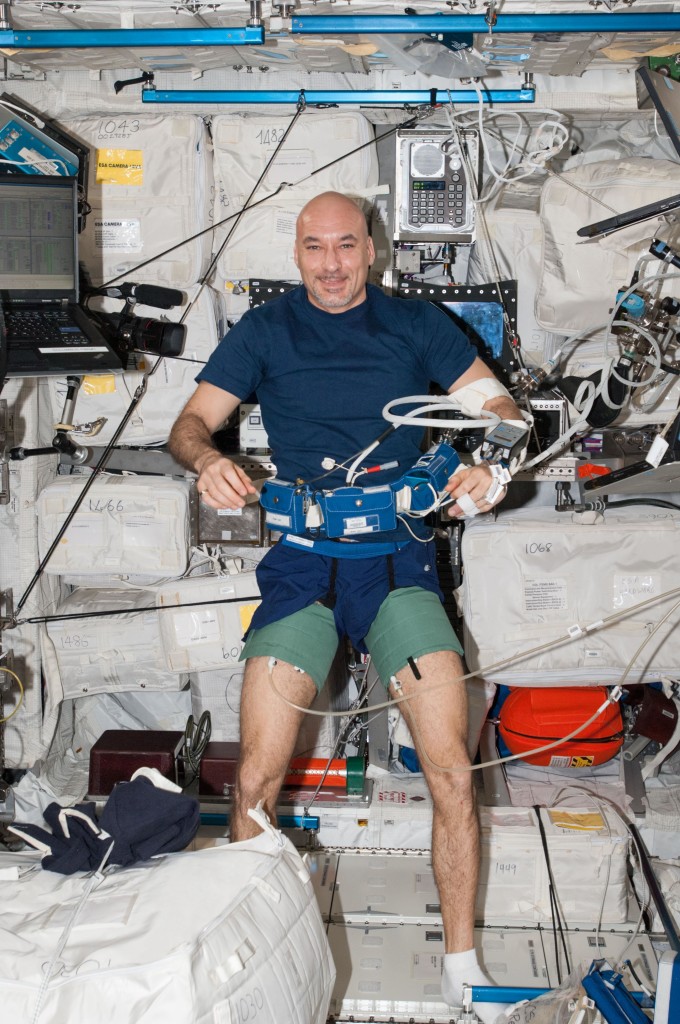 We found that carotid arteries of astronauts after six months on space station were stiffer by about the same amount expected in 10-20 years of normal aging on Earth. In these astronauts, we also took blood samples on station to measure biomarkers to determine if there were changes that reflected similar patterns to what is observed with aging. Cardio-metabolic health can be assessed by measuring fasting blood glucose and insulin, and from this we can calculate an index of insulin resistance. The inflight concentration of insulin was elevated, as was the index of insulin resistance. Although it has been speculated for many years that insulin resistance occurs with spaceflight, this is the first time that it has been confirmed by this index. We found other blood markers that were affected by spaceflight. Hormones involved in blood volume and blood pressure regulation were elevated with spaceflight. A marker of tissue repair mechanisms, matrix metalloproteinase II, was reduced, but future work is required to determine if this was related to vascular repair to responses of other tissues.

Interestingly in the Vascular study, we had a unique opportunity to examine potential differences in responses of male and female astronauts. One of the indicators of carotid artery stiffness, the beta-stiffness index, had a greater change in women than men. Women also had bigger changes in the blood volume and blood pressure regulatory hormones. One of these hormones, aldosterone, has been associated with greater arterial stiffness. Men had a greater change in the index of insulin resistance. It is perhaps not surprising that the cardiovascular systems of men and women respond differently to spaceflight. These results, taken in light of the increased recruitment of women into the astronaut corps, provide incentive to investigate further the impact of spaceflight on cardiovascular health. 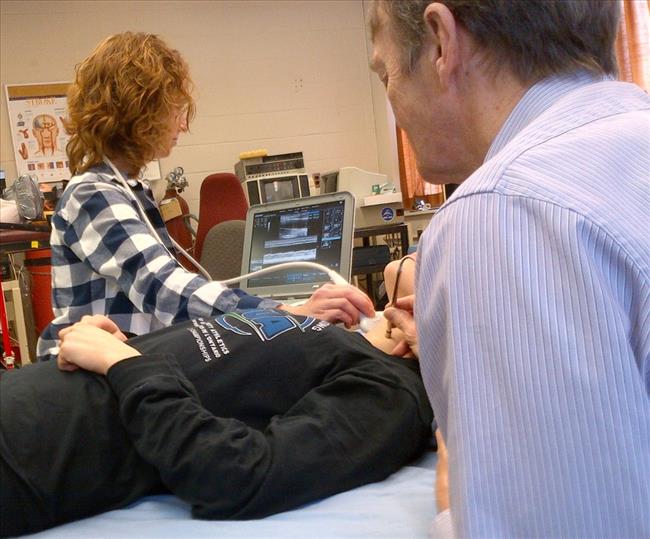 Before and after spaceflight the Vascular Echo research team takes measurements of the arteries with ultrasound and pressure sensors to determine arterial stiffness. (Credit: Dr. Richard Hughson) Canadian Space Agency.

Preliminary results have been obtained as well from our study "A simple in-flight method to test the risk of fainting on return to Earth after long-duration space flights" known as BP Reg. The major objective of this study was to determine if an inflight test of the blood pressure response could identify those astronauts who might need additional countermeasures prior to return to Earth to prevent problems with orthostatic intolerance. To do this, we developed a method to make blood pressure change as if the astronaut was "standing up in space." Large leg cuffs were placed around the upper thighs, and were inflated for three minutes before rapid deflation caused a drop in blood pressure. To measure the cardiovascular responses during cuff deflation, we used the continuous blood pressure device (CBPD) so that we could follow the transient changes. The CBPD also provides a method to estimate other cardiovascular variables, including cardiac output, which could provide valuable information on how blood pressure was regulated in space. However, when we designed the study, we had reason to believe that some assumptions required for the calculations might not hold during spaceflight. To check this, the CBPD method to estimate cardiac output was compared with a rebreathing method. Cardiac output by rebreathing increased 47% from pre-flight seated values to inflight, while the CBPD method was unchanged showing that assumptions used in the calculation are not valid. The result is important, though, as we and others have used the CBPD method to estimate cardiac output, and these numbers probably underestimate changes due to spaceflight.

Over the past 10 years, we have gained an appreciation for how individual variations in adaptations to spaceflight influence the cardiovascular health and function of astronauts living on the space station. The current routines of exercise countermeasures contribute to stability of cardiovascular health while on the orbiting laboratory. However, on return to upright posture on Earth, there are astronauts whose blood pressure regulation is severely challenged. We have seen that these individuals are well monitored by their physicians to avoid problems. We can also state, though, that the daily activity levels while on the space station are greatly reduced from pre-flight, and that over two separate studies, we documented that astronauts average about 30-minutes per day of aerobic exercise. This relatively sedentary lifestyle probably contributed to development of insulin resistance and might have contributed along with the change in arterial blood pressure in the head and neck to increased carotid artery stiffness. We will have an opportunity to monitor these key changes in greater detail with in-flight ultrasounds and blood samples, and also follow the recovery post-flight in the study Vascular Echo, which had its first astronaut launch in December 2015. To obtain a more thorough investigation of the development of insulin resistance, a project that was approved during the 2014 call for proposals will soon directly measure the response to an oral glucose tolerance test.

The Space Station provides a unique platform to study "aging-like" changes in cardiovascular function by taking highly fit and healthy individuals, and then subjecting them to the ultimate sedentary lifestyle. Our research in the Schlegel-University of Waterloo Research Institute for Aging benefits greatly from our investigations of astronauts. Understanding that readjusting to gravity is critical for astronauts and older persons. Just as we saw astronauts with post-flight impairment of blood pressure regulation, there are approximately 20% of older adults who have a large drop in arterial blood pressure on going from bed to upright posture, greatly increasing their risk for falls and serious injury. Astronauts are inspirational. When Canadian astronaut Bob Thirsk promoted Get Fit for Space during his time on the space station, the level of participation in regular physical activity greatly increased in the retirement and long-term care of Schlegel Villages. Now from the Vascular study, we have emphasized the important health message that a single exercise session per day is not sufficient when the rest of the day is highly sedentary to prevent development of insulin resistance. Everyone needs to include physical activity throughout the day.