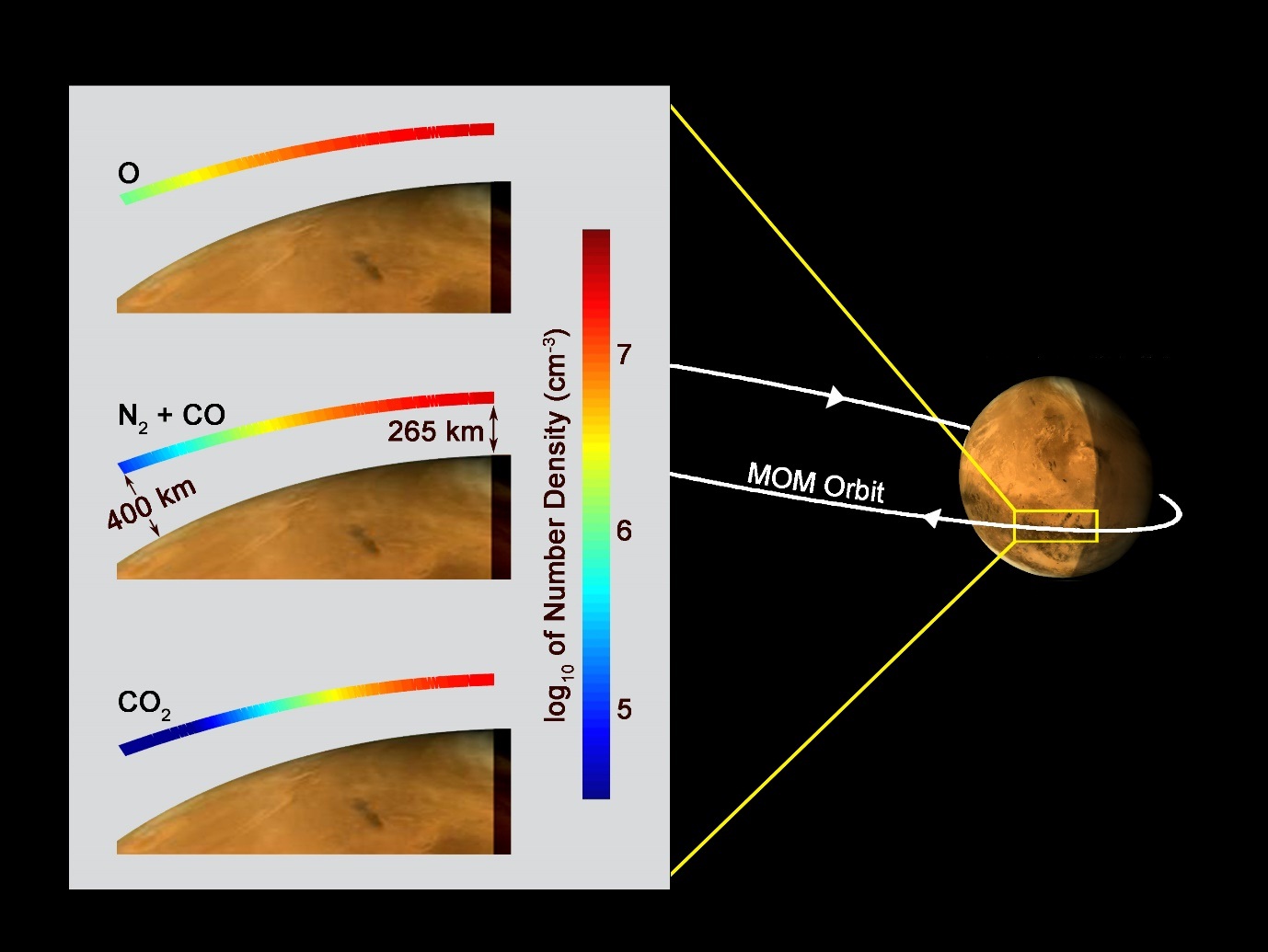 Abundances of the major gases measured by MENCA

The Mars Exospheric Neutral Composition Analyser (MENCA), onboard Indian Mars Orbiter Mission (MOM) is a mass spectrometer, provides in-situ measurements of the neutral composition of the exosphere of the Mars. MENCA is capable of measuring relative abundances of neutral constituents in the mass range 1 to 300 atomic mass unit (amu); the major gases in the Martian atmosphere fall in this range. In addition to acquiring the mass spectra in a specified mass range, the instrument has a provision to track the time variation of the abundances of a set of selectable species. The observation from MENCA will help in understanding the escape of the Martian atmosphere.

At the surface of Mars, the atmosphere is rich in Carbon Dioxide (CO2) and very thin (~6 millbar), about 1% of that of Earth. In the upper part of the Martian atmosphere, at around 100 km, the ultraviolet (UV) rays of sunlight breaks CO2 molecule into Carbon Monoxide (CO) molecule and Oxygen (O) atom. The CO also can be broken by solar UV radiation into C and O atoms. The oxygen atoms are about three times lighter than the CO2 molecules and two times lighter than CO molecules. Hence, oxygen atoms have larger scale height, which means it's density at higher heights falls-off slower compared to that of CO and CO2. Hence, there comes a region in Martian upper atmosphere where the number of O atoms exceeds the number of CO2 molecules. The altitude at which this change-over (CO2 dominance to O dominance) happens depends on how deep the solar UV rays penetrate the Mars atmosphere.

The figure below shows the MENCA-measured abundances of the major gases, namely, atomic Oxygen (O, 16 amu), Nitrogen molecule (N2) plus Carbon Monoxide (CO, 28 amu), and Carbon Dioxide (CO2, 44 amu), in the exosphere of Mars on 21 December 2014, during Martian evening (around sunset in the sky of Mars), from 265 km to 400 km altitude. These observations correspond to moderate solar activity conditions and when MOM’s periapsis altitude was the lowest (~265 km).

MENCA observations have shown that the abundance of Oxygen exceeds that of Carbon Dioxide at an altitude of 270 ±10 km during Martian evening. From the variation of the abundances of different gases with the altitude, the temperature of the Martian exosphere was found to be about 271 ±5 K (-7 to +3 °C). These measurements were conducted when Mars was closer to the Sun in its elliptical orbit (i.e., at perihelion); it is still cooler when Mars is farthest from the Sun.

These are the first in-situ measurements of composition during the local dusk sector on Mars, which would help in setting up the boundary conditions for models dealing with thermal escape processes. The models are basically used to understand the evolution of atmospheres to its present state and its response to various forces.

It is important to note that the CO2-to-O dominance transition altitude differs in day and night, and also varies with different seasons of Mars (due to similar tilt of rotation axis as on Earth, Mars has seasons similar to that on Earth), as well as depends on how active is the Sun.

MENCA has provided several measurements of the composition of the key species of the Martian neutral exosphere.
The above results are published in American journal, Geophysical Research Letters. vol. 43, pp. 1862–1867, (2016).