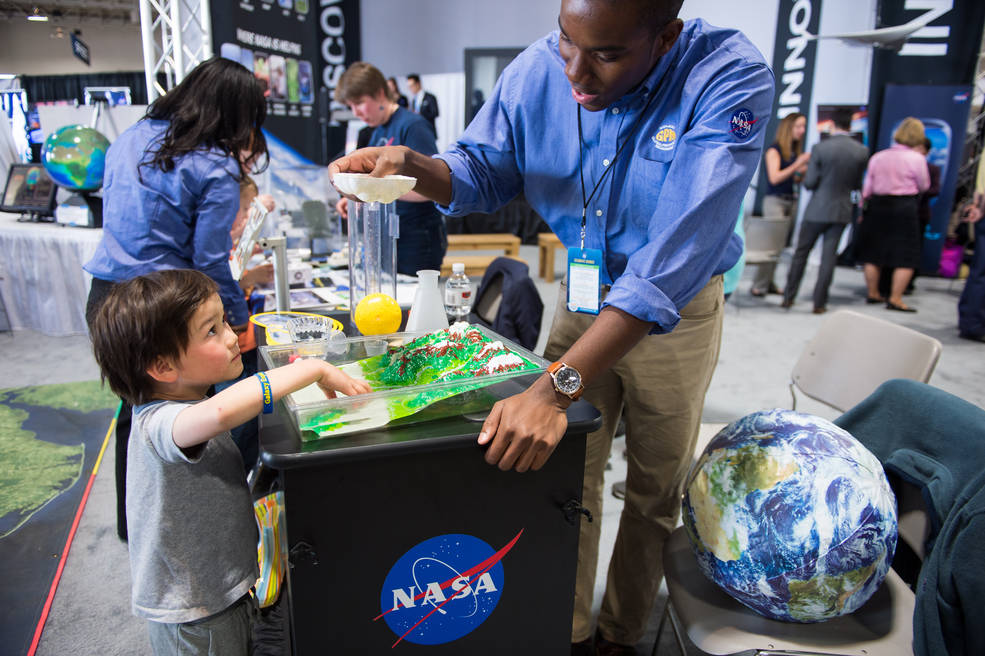 Explore outer space and our Earth with NASA at the USA Science and Engineering Festival, April 15-17 at the Walter E. Washington Convention Center, located at 801 Mt. Vernon Place NW in Washington. NASA scientists and engineers will be on hand at the agency’s interactive and informative exhibit, Booth #6393, Saturday and Sunday to talk all things science and exploration.

NASA will hold a media availability at 10:15 a.m. EDT Friday, during the festival sneak peak event, at its second floor exhibit space. Experts will be on hand to discuss NASA missions that are inspiring today’s youth -- the Mars generation.

During the two-day public event, NASA exhibits will allow visitors of all ages to take virtual reality walks on other planets, snap a selfie in a spacesuit, and enjoy several other interactive activities, as well as talk to experts about a variety of topics, including rockets, robots, X-Planes (experimental aircraft) and deep-space exploration.

NASA partner the Center for Advancement of Science in Space (CASIS) will host a live call from the International Space Station with astronaut Jeff Williams at 12:35 p.m. Saturday.

At 3 p.m. Saturday on the Einstein Stage, NASA’s Jason Crusan will talk about how NASA's first 3-D printer and the Bigelow Expandable Activity Module are paving the way for humans to live, work, and travel farther into space than ever before.

The NASA Stage at the festival will feature agency scientists and engineers presenting fast-paced, TED-style talks. Speakers include NASA’s Director of Planetary Science Jim Green, who will talk about the film The Martian and science fiction versus science fact.

NASA Chief Scientist Ellen Stofan will speak at 1 p.m. Sunday, about NASA’s Journey to Mars, and the agency’s goal of putting humans on the Red Planet in the 2030s. Her presentation will include discussions on how we get to Mars and the unique challenges of living on this distant world, followed by a question-and-answer session with the audience.

Other speakers will talk about NASA’s Earth science missions, future-forward aeronautics research and exploration of our solar system and beyond. The Space Telescope Science Institute, in partnership with NASA, will showcase at the event the agency’s Hubble Space Telescope and the upcoming James Webb Space Telescope, currently being assembled at NASA’s Goddard Space Flight Center in Greenbelt, Maryland. Visitors can use interactive software to explore how NASA’s fleet of telescopes observe space across the electromagnetic spectrum. They also will see how astronomers create multi-colored images from data taken with Hubble and the Webb telescope.

For a complete list of NASA activities and speakers during the festival, visit:

For more information about NASA and agency programs, visit: