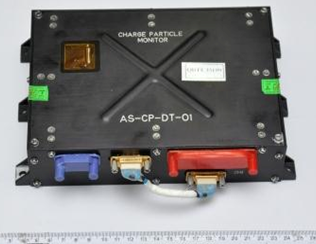 India's first Multi-wavelength Space Observatory ASTROSAT was successfully launched by ISRO's workhorse launch vehicle PSLV into a 650km orbit on September 28, 2015. ASTROSAT has an onboard Charged Particle Monitor (CPM) to detect high-energy particles in the satellite orbital path and to provide alerts to the other payloads, for necessary action. CPM is designed to measure the count of charge particles at the satellite location. It is sensitive to protons above 1 MeV (Mega-electron volts). On September 29, 2015, a day after the launch of ASTROSAT, CPM was `Switched ON’ and its performance is normal.

Satellites in the Low Earth Orbit (LEO) pass through the trapped radiation belts of the South Atlantic Anomaly (SAA) region, which has high fluxes of protons and electrons. Due to the high density of energetic particles (mostly protons), there could be adverse effects like glitches in the data, aging of the instruments and even permanent damage to some of the detectors. Hence, this region should be monitored for a particular orbit and precautions should be taken to protect the scientific instruments during the satellite’s passage through the SAA region.

At the orbit of ASTROSAT (650 km), the particle rates are usually low, but, as the satellite enters SAA, the particle rates can go very high and can damage the sensitive X-ray detectors onboard ASTROSAT. CPM will sense the SAA by measuring the total number of protons, above a 1MeV. The CPM expects roughly 1 detection per second at usual times outside SAA. However, this could rise to many 100 detections per second while passing through the SAA. When the satellite is entering the SAA, CPM will provide a signal to the other instruments which can then lower their operating voltage or even shut off temporarily.

CPM started providing data once it was switched on. The observed particle rates are shown in the Figure 1: they are a benign 0.8 counts per second most of the time and go up whenever the satellite enters the dreaded SAA region. The same data is shown pictorially in the adjoining Figure 2. ASTROSAT orbit has an inclination of 6 degrees (specifically selected to minimise the time in the SAA region) and the figure shows data for 12 orbits. The low particle rates are shown in Cyan and the Magenta patch indicates the location of the high background SAA region.

When the particle rate goes up, the CPM will automatically alert other instruments. For example, CZT-Imager, the hard X-ray payload, `switched ON’ on Oct 2, uses this information to stop operation and protect itself during the passage of ASTROSAT through the SAA region.