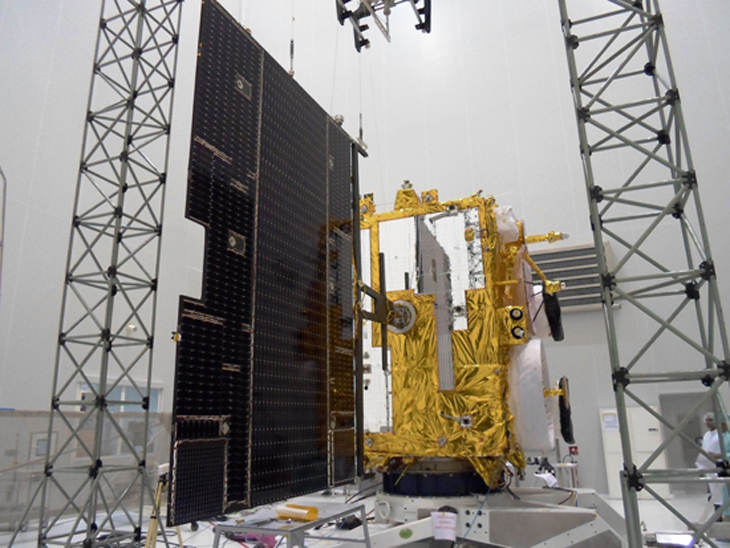 The main objective of the INSAT-3D mission is to provide high quality observations for monitoring and prediction of weather events as well as for the study of climate. The state-of-the-art instruments like “Imager” and “Sounder” onboard INSAT-3D satellite provide a wide range of atmospheric products such as cloud coverage images, atmospheric winds, sea and land surface temperatures, humidity, quantitative rainfall, earth’s radiation, atmospheric profiles, ozone, atmospheric stability parameters, fog, snow, aerosols. These products are immensely helpful in monitoring day-to-day weather and prediction of extreme events like tropical cyclone, thunderstorm, cloud burst and heat waves. Detail of the payloads:

2. Sounder: INSAT-3D carries a 19 channel Sounder, with 18 narrow spectral channels in short-wave infrared, middle infrared and long wave infrared regions and one channel in the visible region. It provides information on the vertical profiles of temperature, humidity and integrated ozone. These profiles are available for a selected region over Indian landmass every one hour and for the entire Indian Ocean Region every six hours.

4. Satellite Aided Search and Rescue (SAS & R) Transponder: INSAT-3D is equipped with a Search and Rescue payload that picks up and relays the alert signals originating from the distress beacons of maritime, aviation and land based users to the Indian Mission Control Centre (INMCC), located at Bengaluru.

Images from INSAT-3D played an important role while tracking Cyclone Hudhud, which hit the east coast of India during October 2014. The track of cyclone Hudhud was predicted in real-time using INSAT-3D data. The INSAT-3D visible and Thermal Infra-Red (TIR) observations were used to determine the center position of the cyclone, which is an input for the cyclone track and intensity prediction models. The half hourly TIR-1 imageries of cyclones were used to estimate the radius of maximum winds of cyclone, which is an essential input parameter for the prediction of storm surge associated to the cyclones. The structural analysis of cyclone was performed using the TIR-1 data obtained from INSAT-3D. Elaborate preparedness based on timely information about Hudhud from INSAT-3D helped in reduction in the loss of life and property due to cyclone hit.

INSAT-3D has the distinction that its radiance observations and derived products are being operationally assimilated in numerical models operated by national weather prediction agencies like IMD and National Centre of Medium Range Weather Prediction (NCMRWF). Besides that, leading international agencies like European Center of Medium range Weather Forecast (ECMWF) and United Kingdom Meteorological Office (UKMET) are also looking for possibilities to use INSAT-3D derived atmospheric winds in their global models.

The achievements of INSAT-3D mission paved the way for ISRO to become a member of prestigious international groups like Coordination Group of Meteorological Satellites (CGMS) during the meeting at Boulder, Colorado in May 2015. To achieve the international climate standard, INSAT-3D radiances are continuously monitored and calibrated by Global Space based Inter calibration system (GSICS) procedure to ensure that INSAT-3D observations meet the international quality standard.