The April 25, 2015, magnitude 7.8 Gorkha earthquake in Nepal triggered devastating landslides in Langtang Valley. Ice, snow and debris avalanches, rockfalls and landslides also occurred widely in other areas of the Nepal Himalaya. Landsat 8 satellite imagery shows that a landslide is also damming a river and resulting in the formation of a lake in the Manaslu trekking region of Nepal. 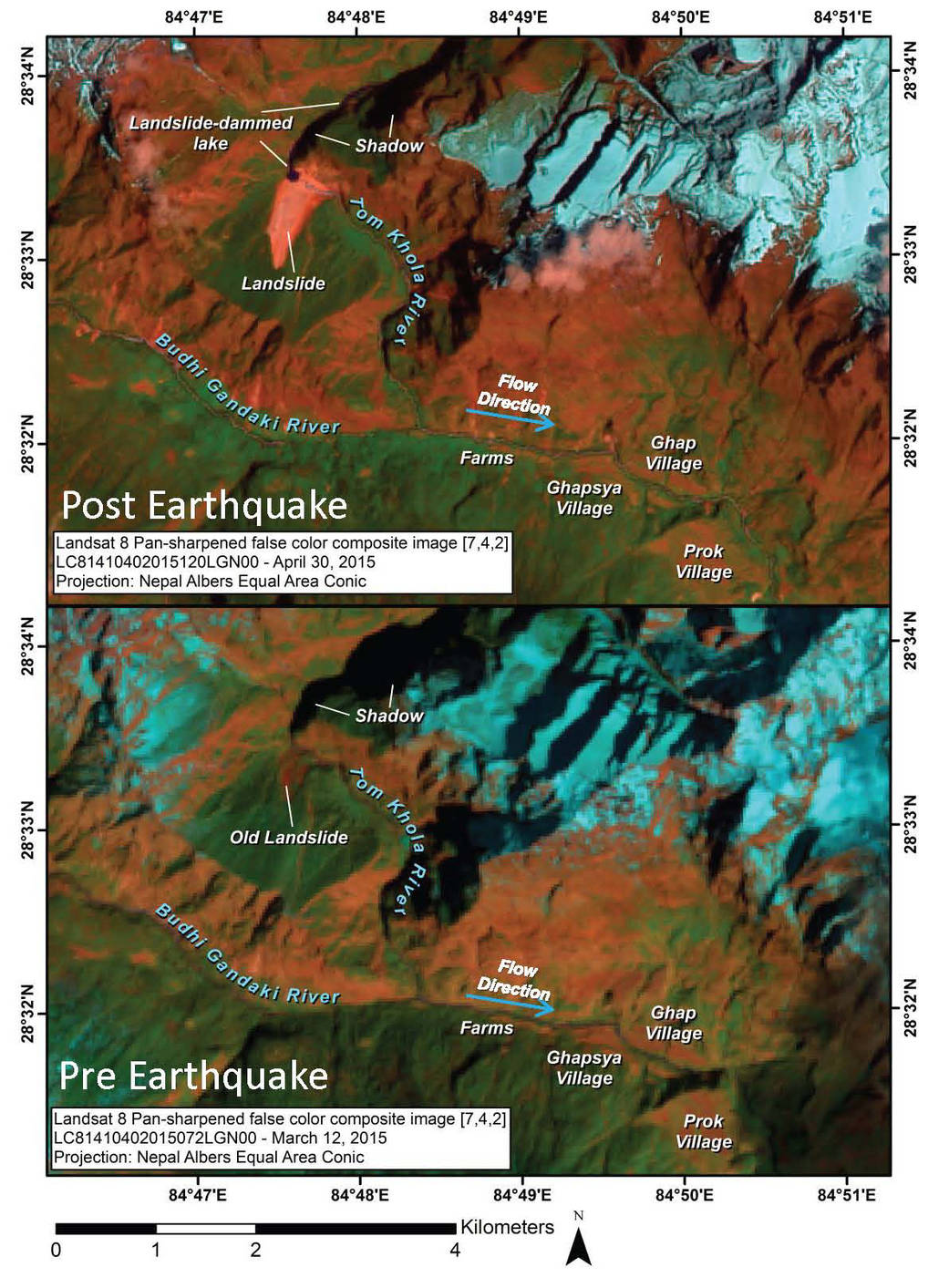 The landslide location is: 28.559N, 84.793E, at about 8,200 feet (2,500 meters) elevation. The first post-earthquake optical imagery was limited by clouds, but recent clear and partly-cloudy skies over the area have allowed for improved imagery obtained by satellites operated by the United States, India and Digital Globe. Through analysis of pre- and post-event imagery from March 12, 2015 and April 30, 2015 (six weeks before and five days after the earthquake) acquired by the United States Geological Survey/NASA Landsat 8 satellite, the earthquake-induced landslide was detected. It was also found that a new lake is forming upstream from the dam where the slide has blocked stream flow. 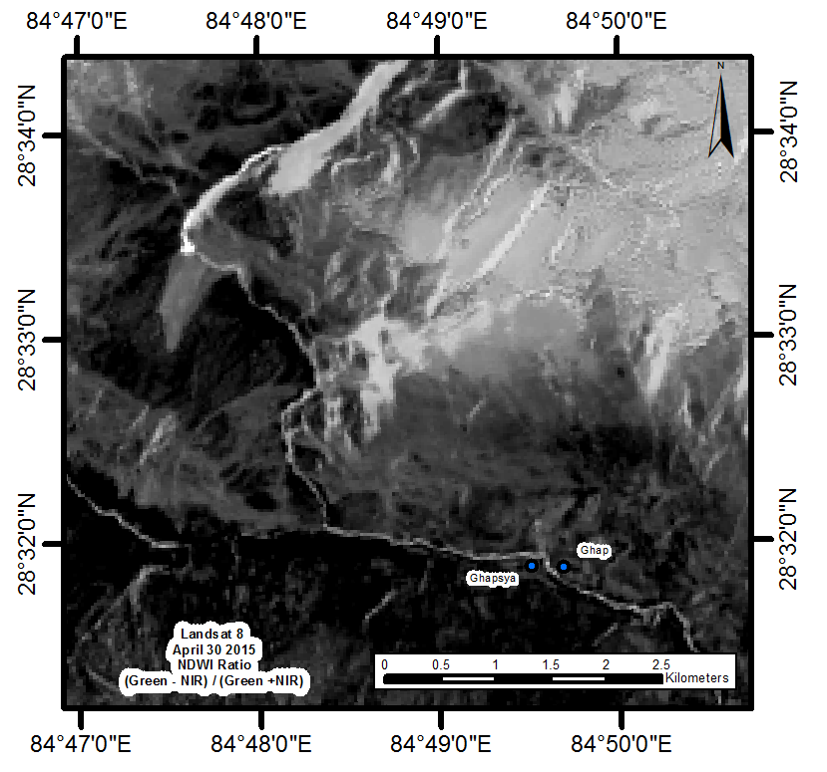 The assessment used a combination of false-color images as well as the normalized differential water index (NDWI), a mapping technique that separates surface water from rock and vegetation, to identify the landslide and confirm that an impoundment lake is forming. In the first pre- and post-earthquake image pair, vegetated land appears red and green, snow and ice appear light turquoise, and water ranges from almost black to dark blue. The landslide is bright red. The image pair was obtained with shadow cast over part of the lake, making it necessary to use the NDWI technique to map the lake and distinguish it from shadow and dirty snow.  The last image was processed from the same post-earthquake Landsat image and shows water appearing as almost white, whereas shadow and ice or snow and the landslide are gray, and everything else, mainly vegetation, is almost black.   The lake is clearly discerned. 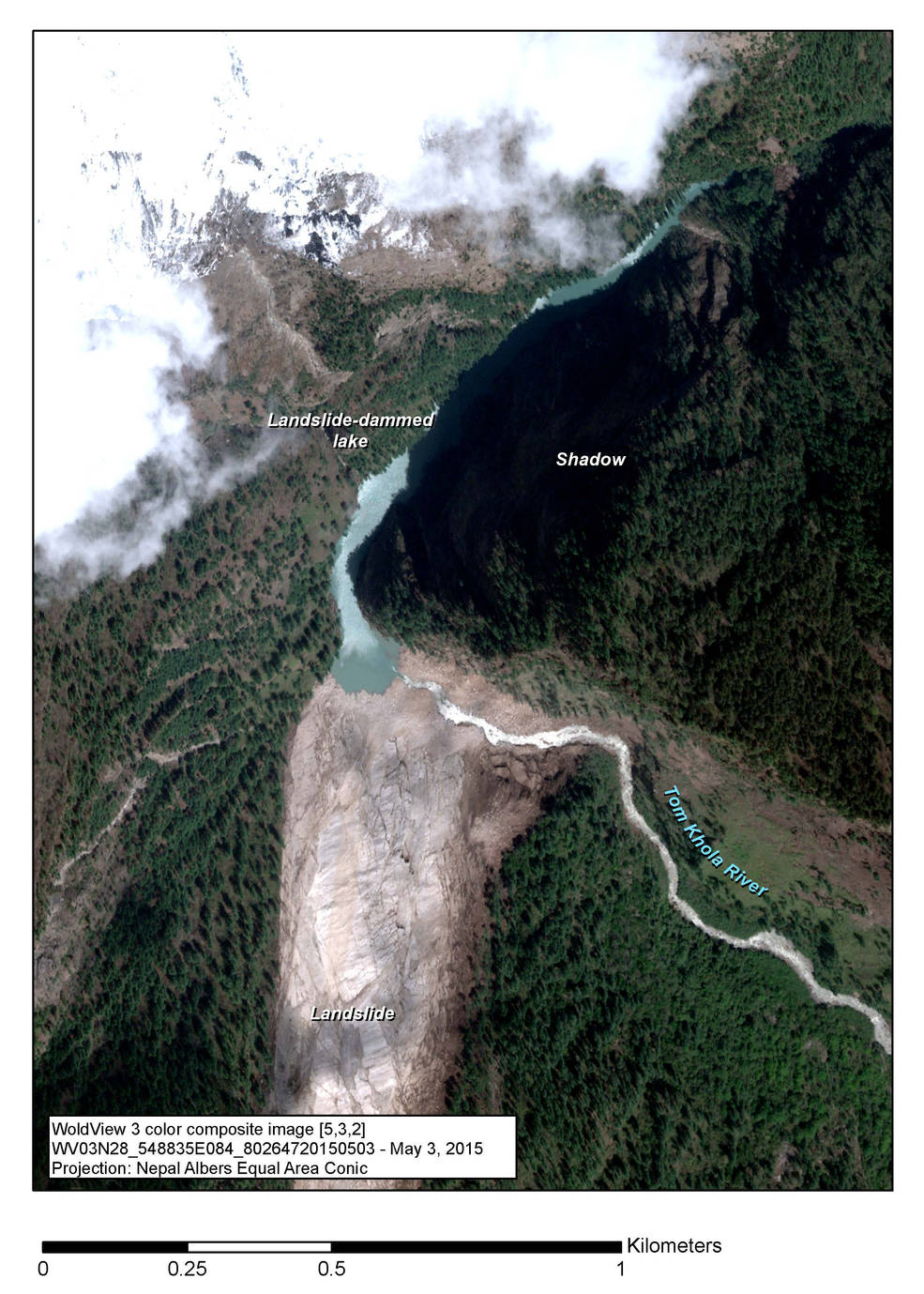 It appears that this landslide did not harm any villages; however, the new lake is upstream of the villages of Ghapsya (3.1 miles, or 5 kilometers) upstream and Ghap (3.7 miles, or 6 kilometers), and just 2.5 miles (4 kilometers) from terraced agricultural fields. The landslide dam is also just 3.7 miles (6 kilometers) downstream from the Nepal/Tibet border, so if the lake grows much more, it will become a concern to China as well.  If the lake continues to grow, it could become increasingly unstable, adding pressure to the rock and material forming the earthen dam created by the landslide. The water may eventually drain slowly, but could also result in an outburst flood. In response to the initial findings based on the Landsat imagery, Indian and commercial satellites have acquired additional high-resolution images that confirm the existence of the lake, which was first identified using Landsat 8.  A commercial WorldView satellite (operated by Digital Globe) obtained a detailed image free of cast shadows on May 3, 2015.  The image shows that the lake very clearly has breached the landslide, probably slowly enough to cause no harm but hopefully fast enough to drain the lake. The lake size does not appear to have grown much, if at all, since the Landsat 8 image was obtained.  Additional satellite-based reconnaissance and measurements are necessary to better assess the evolving risk due to the lake.