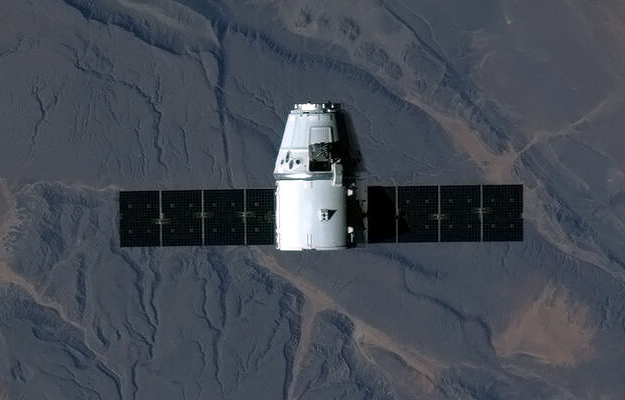 Space station Expedition 34 crew members Kevin Ford and Tom Marshburn of NASA used the station's robotic arm to successfully capture Dragon at 5:31 a.m. The capture came one day, 19 hours and 22 minutes after the mission's launch. The station was 253 miles above northern Ukraine. Following its capture, the spacecraft was installed onto the Earth-facing port of the Harmony module through ground commands issued by mission control at NASA's Johnson Space Center in Houston.

"The newly arrived scientific experiments delivered by Dragon carry the promise of discoveries that benefit Earth and dramatically increase our understanding of how humans adapt to space," said William Gerstenmaier, NASA's associate administrator for the Human Exploration and Operations Mission Directorate in Washington. "Spaceflight will never be risk-free, but it's a critical achievement that we once again have a U.S. capability to transport science to and from the International Space Station. The science delivered and to be returned from the space station has the promise of giving us a unique insight into problems that we face on Earth. As the patch of Expedition 34 states: 'Off the Earth...For the Earth.'"

The Dragon spacecraft lifted off from Cape Canaveral Air Force Station in Florida at 10:10 a.m. Friday aboard a SpaceX Falcon 9 rocket. Shortly after spacecraft separation from the rocket's second stage, the Dragon lost three of its four thruster pods. Solar array deployment was delayed while SpaceX engineers worked to purge blocked valves and get the pods back online. Ninety minutes after launch, Dragon's arrays were deployed. By 3 p.m., all four thruster pods were online and attitude control was regained.

Following a series of tests to ensure the spacecraft could safely approach the space station, Dragon was approved to approach the orbiting laboratory Sunday morning, one day after its originally planned arrival, which is not expected to impact any of the scientific investigations being delivered.

Dragon is loaded with about 1,268 pounds (575 kilograms) of supplies to support continuing space station research experiments and will return with about 2,668 pounds (1,210 kilograms) of science samples from human research, biology and biotechnology studies, physical science investigations, and education activities.

Newly delivered investigations include studies of how molecular biology, cells and plants grow in microgravity. One experiment, titled Coarsening in Solid Liquid Mixtures-3, will examine solid and liquid mixtures made of lead and tin that contain a small amount of tin branch-like structures called dendrites. By understanding how temperature and time control the growth of such dendrites, researchers hope to develop more efficient and economical means of producing higher-quality products derived from the casting of molten metals. New student experiments include observing how gravity changes the growth of E. coli bacteria, studying the long-term impact of space travel on small coin-cell-sized batteries, and producing ammonium aluminum sulfate crystals of higher purity than is possible on Earth.

Experiment samples coming back to Earth will help researchers continue to assess the impact of long-duration spaceflight on the human body. Returning plant samples will aid in food production during future long-duration space missions and enhance crop production on Earth. Crystals grown aboard and returning from the station could help in the development of more efficient solar cells and semiconductor-based electronics.

The Dragon capsule is scheduled to spend 22 days attached to the station before returning for a splashdown in the Pacific Ocean off the coast of Baja California March 25.

This flight is the second of at least 12 SpaceX cargo resupply missions to the space station through 2016. The resupply contract with NASA is worth $1.6 billion.

NASA's Space Network, which includes the Tracking and Data Relay Satellite System, provided space communications for SpaceX from launch through berthing with the space station.

SpaceX built and tested new cargo spacecraft under NASA's Commercial Orbital Transportation Services (COTS) program. NASA initiatives like COTS and the agency's Commercial Crew Program are helping develop a robust U.S. commercial space transportation industry with the goal of achieving safe, reliable and cost-effective transportation to and from the space station and low Earth orbit. In addition to cargo flights, NASA's commercial space partners are making progress toward a launch of astronauts from U.S. soil within the next few years.