The Progress M-17M Logistics Spacecraft Is In Orbit 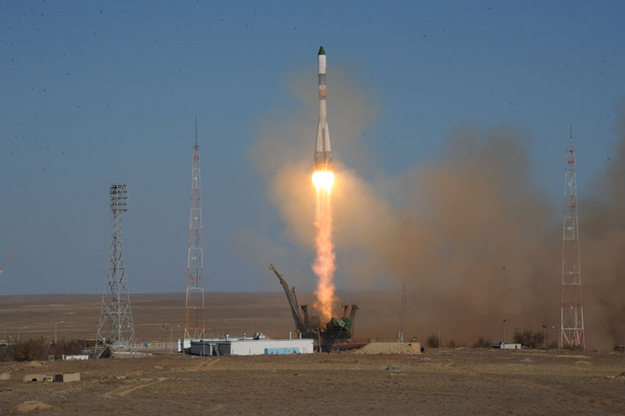 At 11:41:18 AM Moscow Time, logistics spacecraft Progress M-17M was launched from the Baikonur launch site.

The purpose of the launch is to support further in-orbit operation of the International Space Station (ISS) in accordance with Russian commitments under that project.

The main objective of the mission is to deliver to the Space Station various cargoes that are needed to continue the ISS mission in manned mode and provide life support for the crew, as well as to continue developing the "quick" process for rendezvous and docking of the spacecraft with the space station during the spacecraft's fifth orbit.

The spacecraft was put into a parking low-Earth orbit with the following parameters: 51.66 degrees inclination, 193.75 km minimal altitude, 245.34 km maximum altitude, 88.59 minutes orbital period. The onboard systems of the spacecraft operate normally.

At the launch site, the spacecraft prelaunch processing and launch operations were performed under the direction of the State Commission (chaired by the head of Roscosmos V.A. Popovkin). The Commission was basing its decisions to proceed with each next step in processing and launching on the opinions of the Technical Management headed by the RSC Energia President and Designer General V.A. Lopota.

According to the telemetry data and reports from the crew of Expedition 33 to ISS its systems function normally. The space station is ready for docking with the spacecraft, which is scheduled for October 31 at 17:40 Moscow Time.

1. In its compartments, the spacecraft carries into orbit supplies of propellant, oxygen, air, water, food rations, including natural form foods, hardware to support the operation of the station systems and equipment, hardware for scientific research and experiments, additional hardware for the Russian Segment modules, as well as packages for the ISS crew.

3. The mission plan for Progress M-17M, just as in the case of the previous spacecraft Progress M-16M, calls for its rendezvous and docking with the ISS within six hours after its insertion into orbit. Such mission profile, when developed, will make it possible for the crews of manned transportation spacecraft Soyuz TMA-M to arrive onboard ISS within the first day after the launch, which, first of all, will make it easier for the cosmonauts and astronauts to adapt to spaceflight environment.