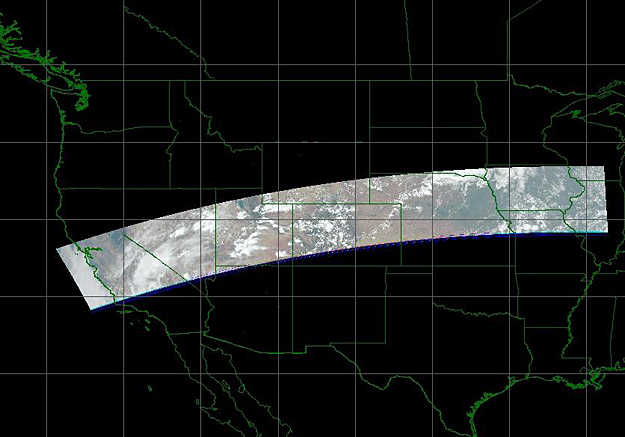 Real-time data that will be used in everything from weather forecasts to disaster response is now being beamed down to Earth from a cone-shaped appendage aboard the nation's newest Earth-observing satellite.

The High Rate Data (HRD) link is an antenna aboard the Suomi National Polar-Orbiting Partnership (NPP) satellite that provides 'direct broadcast' data to users in real-time. Researchers world-wide are then able to use customized algorithms, or mathematical formulas, turning raw data into images to help manage quickly changing regional events, such as rapidly spreading forest fires, rushing flood waters and floating icebergs at the poles that could affect the shipping and fishing industries.

"Direct Broadcast data is unique in that it provides real-time data on a regional basis which enables quick evaluation of events at a local level," said Patrick Coronado, head of the Direct Readout Laboratory at NASA's Goddard Space Flight Center in Greenbelt, Md.

In general, a satellite stores data on-board until it passes over a ground station where it downloads or 'dumps' the data. In Suomi NPP's case, data is dumped every time it passes over the ground station in Svalbard, Norway, about 14 times every 24 hours. Use of this mode of storage, called Storage Mission Data, ensures that information is not lost when the spacecraft is out of sight of any ground stations, such as when it is over the ocean.

This collected data then runs through a computer system on the ground called the Interface Data Processing Segment (IDPS), which uses science algorithms to create data products for environmental monitoring and research. But this process can take some time and some users need the data as soon as possible.

The USDA Forest Service, for example, needs information quickly to map forest fires as they begin and spread to surrounding areas so they use the direct broadcast data, feeding it into customized algorithms that help remote sensing and image analysts to quickly process the data into usable images and mapping products so that firefighters and other first responders can react appropriately.

"We apply direct broadcast data daily to produce an entire suite of fire mapping and geo-spatial products," said Brad Quayle, an image analyst at the USDA Forest Service Remote Sensing Applications Center. "We can produce about a dozen science products within 20 minutes after we receive the raw data from the satellite, including detection of active fires. Utilizing other means to acquire imagery and derive products could add several hours to the process. Providing accurate and reliable information with minimal latency aids decision makers in various aspects of fire management," he added.

The USDA also uses direct broadcast data for mapping the location and extent of burn scars and monitoring the health of the approximately 700 million acres of forested land throughout the United States.

Ultimately, Suomi NPP's direct broadcast data does two things: continue NASA's role in data continuity by picking up where MODIS will leave off, and enable users to pluck data that is of importance to them from the reservoir of information that comes down from Suomi NPP.

NASA Goddard's Direct Readout Laboratory organizes and manages the funneling of data to the roughly 200 ground stations around the world that will use it.

During the satellite's early developmental stages, a team of 15 scientists and engineers from the Direct Readout Laboratory worked with the mission to ensure that users will be able to receive the data once the satellite was up in space. They then provided ground stations all over the world with software compatible with the spacecraft that enables them to catch the direct broadcast data, and they do all of this for free.

"It is important to do this for free because it makes it accessible to everybody; it creates relationships and fosters data exchange with other research and Earth-monitoring application organizations, not to mention helps save lives and property," Coronado said.

But acquiring all this freely transmitted, live satellite data as it comes down from space requires more than just an antenna.

"Getting data from satellites is tricky business without the proper equipment, and the data is useless if you do not have the algorithms," said Coronado.

Acting as an outreach program to enable each ground station to receive and analyze data, Coronado and his team dive into the plethora of algorithms that make up the global data processing system to pull out those that they have assessed will be useful for communities or that are specific to certain ground stations.

The Direct Readout Laboratory then packages each individual algorithm, which can range from vegetation fire detection to cloud temperature in a 'science processing algorithm' (SPA) wrapper so that it can function outside of the sophisticated IDPS environment and with direct broadcast data. The Direct Readout Laboratory then creates computer programs that convert direct broadcast data into information that the wrappers can read, ensuring that the data will be useful when plugged into the algorithm.

The IPOPP architecture acts as a translator so when algorithms are plugged into the software, it supports the creation of products for use in models that range from vegetation monitoring to sea surface properties, which simplifies the processing immensely.

"NASA Direct Readout Laboratory has invested significant effort to port into IPOPP the full suite of the latest science processing algorithms for the land, ocean and atmosphere disciplines that can be processed in a direct readout environment," said Brian Schwind, Center Director for the USDA Forest Service Remote Sensing Applications Center.

The Space Science and Engineering Center (SSEC) at the University of Wisconsin-Madison is playing an important role in providing software to Suomi NPP direct broadcast users. Known as the Community Satellite Processing Package (CSPP), the SSEC has already provided 40 different users, including educational institutions and government agencies, with software that converts digital signals received by the antenna to into useful physical quantities, such as reflectance and temperature.

"The new sensors and capabilities offered by Suomi NPP are eagerly anticipated by users both in the United States, and around the world," said Liam Gumley, CSPP project manager at University of Wisconsin-Madison. "The university is pleased to be a part of the effort to share this new weather and environmental satellite asset with the world."

The Community Satellite Processing Package is currently being tested at the SSEC in conjunction with the NOAA National Weather Service.