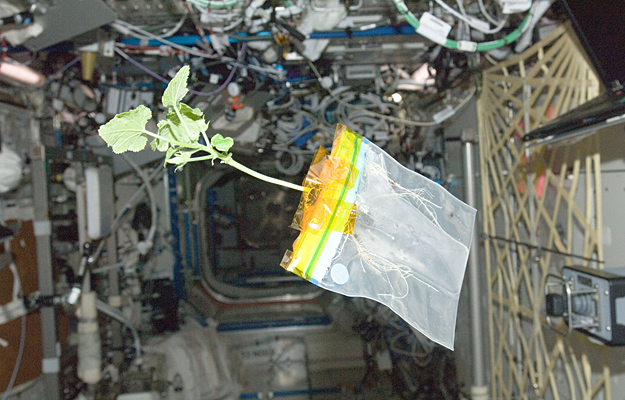 This is most definitely not hydroponics; my roots are not submerged in a bag of water. This bag is mostly filled with air and only has a small amount of water neatly tucked in the corners from the action of capillary forces in weightlessness. This is aeroponics, a rather new method for raising plants without soil and without large volumes of water. Only a small amount is needed, just enough to keep my roots at 100 percent humidity and make up for what I drink. My roots are not hermetically sealed in this bag, they have access to gas exchange with the cabin air. My roots are thus exposed in this transparent bag, naked to the universe. Embarrassed, it took me a few days to get over the idea that anyone can see my roots without any dirt covering them.

I reach for the light. It burns brightly and makes my cotyledons a happy vibrant green. There is a small plastic bag loosely set over my top that keeps the humidity high for my tender new leaves. My roots are another matter. They sense sourness, the kind that makes one want to tip-toe across the floor for fear of getting something on your feet. But for now it does not matter. I am living off the nutrients in my seed pod.

My cotyledons, like a drogue chute in a parachute deployment sequence, provide the photosynthetic nourishment until my real leaves can form. Now I stretch my first leaf and orient it towards the light. My cotyledons, having served their purpose, will soon wilt. The plastic bag cover was removed by my gardener. 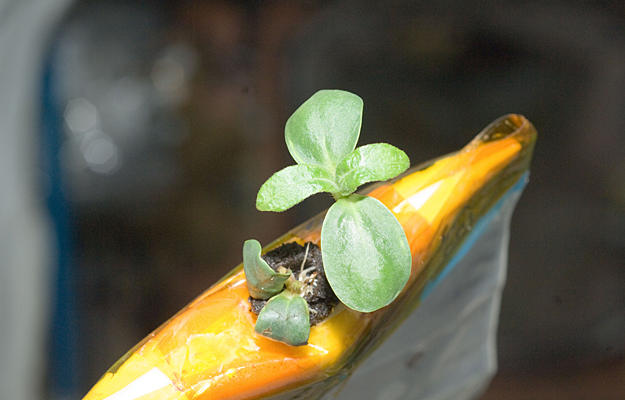 My gardener fusses with me several times a day. He checks that I have water, light, and with a hypodermic syringe, injects this tea concoction into the ziplock bag. It bathes my roots with a not so tasty drink however it does seem to contain the nutrients I need. I won't complain; on expeditions into the frontier the food is often this way.

My gardener fusses with my leaves. I am not sure if I like that. I now have four and I do not quite understand why he behaves this way. He sticks his nose up against them. Does he take me for some sort of a handkerchief? Apparently he takes pleasure in my earthy green smell. There is nothing like the smell of living green in this forest of engineered machinery. I see the resultant smile. Maybe this is one of my roles as a crewmember on this expedition.

I am about 15 centimeters high now but still only have four leaves. I am vibrant green and happy. My roots still drink this sour tea but it seems to have everything I need. I am reluctant to ask my crewmate where this comes from. 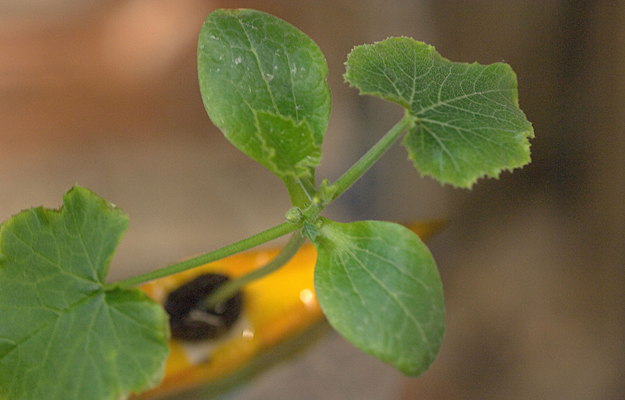 I found out what the tea is made from. Apparently we have a space compost pile. A plastic food bag is filled with a mixture of paper scraps, orange peels, garlic skins, apple cores, and other various food leftovers. Nobody eats the packets of freeze dried green beans and these seem to compost well. To this was added a teaspoon of dirt from Mother Earth. When kept wet, it stays warm to the touch. Liquid tea, extracted from this mess is what I have to drink. It makes me gag not unlike what my kind does to little boys at the dinner table. I suppose this is orbital Karma but hey, I am in space and part of this mission and am standing tall and green.

Keith's note: When I was in high school I was mesmerized by a film that is often relegated to being a "cult classic" "Silent Running". While the premise is from the 1970's popular mindset, the premise is simple: a bunch of plants and animals are kept alive in space in giant greenhouses. I soon went on to become a biologist - eventually a space biologist at NASA - and these images from the film were always on my mind.

Years later my business partner Marc Boucher and I donated and personally constructed a greenhouse on Devon Island - almost as isolated and harsh as what was depicted in Silent Running. Years later I showed Douglas Trumbull, the director of Silent Running, a picture of the greenhouse (The "Arthur Clarke Mars Greenhouse") and told him that Silent Running was my inspiration. A very broad smile expanded acorss Trumbull's face.

Alas, that greenhouse on Devon Island is now sitting unused on Devon Island with no plans for its future use. During the time that the greenhouse was being used, it was rather other-worldy to walk inside a humid, green mini-biosphere set amdist terrain that has a distinct Martian look and feel. Maybe someone will find a use for it once again. I wonder what today's hgh school students could do with a remotely operable greenhouse located less than a thousand miles from the north pole near an asteroid impact crater with surroundings noted for their similarity to what we've seen on Mars.
-----

Light comes in different flavors. Currently I have only one kind. It is becoming boring to my leaves and my stems are reluctant to keep them properly oriented. And it stays on continuously for 24 hours a day. I heard my crewmates discussing this. It is a special light fixture with a flavor balanced to help crews sleep shift. It works for me as well but this constant intensity all with the same flavor is getting to me.

Oh glorious day! I discovered a window with a view - and my leaves sing. It is a small out of the way window tightly packed with stowage. It looks directly at Earth which reflects bright diffuse sunlight off the wintertime clouds. This reflection is so bright that my crewmates need to wear sunglasses else their eyes begin to tear. I drink from this fountain of light and in turn my leaves release extra essence of green, which I can see brings my crewmates' olfactory pleasures.

I am becoming quite popular. I heard one say that he would vacuum the HEPA filters for my gardener if he could have five minutes with his nose close to me.

I have a call sign. I guess a call sign is a fighter pilot thing and was surprised that I could earn such a title. At first someone suggested "Four-Leaf". I was a bit embarrassed when I heard this since I still only sport four leaves and feel a bit sensitive to this fact. My gardener intervened and said that would not do. He gave me my call sign - "Rose".

I am becoming confused. These 16 short periods of day and night every 24 hours are making me jet-lagged. My photosynthesis activity just gets going and then abruptly shuts down. Repeating this cycle is putting me into a dither. My leaves do not sing as loud. 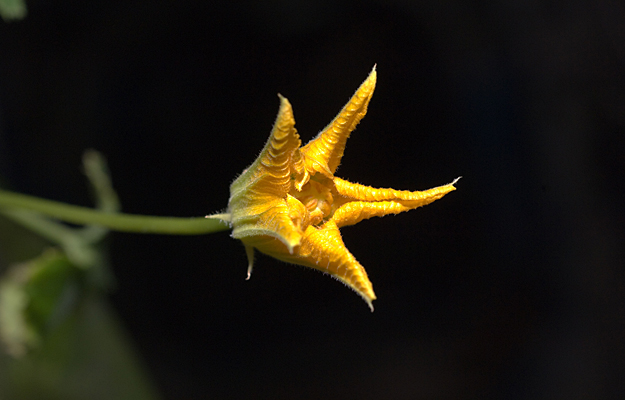 My gardener is now moving me around this spacecraft and I can get a better view of the place. By crew work day, I am moved under the sleep shift light. During crew sleep I am placed by the window. This schedule works much better for me. I get the pleasure of basking in real sunlight as well as the steady glow from the lamp.

I am making flowers. I do not know if this is from the light or the nutrients in my tea. I currently have four little flower buds, all neatly tucked under my four leaves. It seems that I should be making more leaves, not flowers. Maybe it is because I am in space and this is what zucchinis are supposed to do.

I learned that my gardener has a gardener too. Only his gardener does not water him but speaks to him from a panel on the wall. His gardener must be very important. They stop whatever they are doing whenever he calls.

My flower buds are developing. I will soon be in full orange bloom. My gardener is behaving like an expecting father. There is excitement in the air.

One of my buds opened today and is in full bloom. Surprisingly, it does not open all the way but looks more like an inverted orange umbrella that got stuck at the halfway point. My spherical shaped stamens give off a tantalizing essence. My gardener did not tell his crewmates about this and kept me all to himself.

My gardener made special arrangements for a two way video conference with a special Earth-flower. When all the arrangements had been made, he took me from my window and placed me center stage in front of the video camera. She was a very attractive flower all neatly dressed. He said to her, "I can not offer you much; I can only give you a space zucchini." The image of my orange blossom was beamed across the void between spacecraft and Earth. Her heart melted. I felt as much a rose as any rose could ever be. He picked my flower and opened a large book, an atlas. Placing my bloom on the map of Texas, over Houston town, he closed the book and clamped it shut with a piece of Kapton tape. He said come July, when our mission is over, he will present this to her in person. I thought that something must be wrong for both of them had tears. In space, tears do not run down your cheeks but remain as a glob in the corner of your eye.

There was excited talk about my blossoms today. They were all looking forward to seeing little zucchinis in space. I did not have the heart to tell them one small detail. I make two kinds of flowers; male flowers with only stamens and female flowers that produce zucchinis. Being part of this all man-crew, it was fitting for me to make only male flowers.