NASA LRO Image of the Moon: Fractures in Ohm's Melt 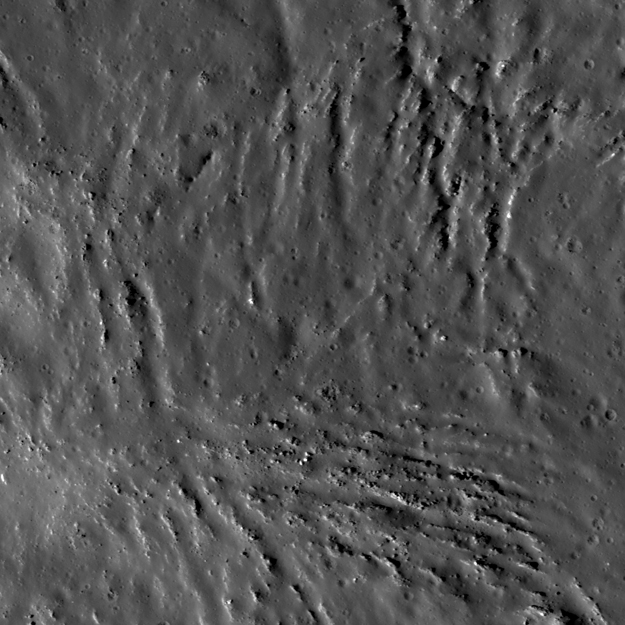 Impact melt deposits are some of the most distinctive geologic features on the Moon, probably because no two impact melt deposit morphologies are alike! Studying the morphology of an impact melt pond can reveal much. For example, if the melt deposits are thick enough to cover ejecta blocks on the crater floor, the surface will most likely be quite smooth. However, in many cases on the Moon, the impact melt pond is not of uniform thickness, nor is it uniformly distributed within the crater. The surface features of the impact melt reflect whether the distribution of melt is uneven in a crater or not thick enough to cover the blocks and boulders on the crater floor. If this is the case, the impact melt may appear hummocky, have mounds exposed, and may even be extensively fractured. Such is the case in today's Featured Image, highlighting a portion of the impact melt solidified within Ohm crater (18.309°N, 246.265°E), near the crater's eastern wall.

Although difficult to discern in the LROC NAC opening image (but observed in the full frame), there is a topographic bulge in the lower-left, flattening out toward the upper right. This slight difference in topography, probably caused by the proximity to the crater wall, was responsible for the different fracture patterns. As the melt cooled, it experienced stress that promoted crack formation. Cracks, and other types of structural failure, follow the local stress fields and the path of least resistance, which explains why there are at least two different orientations of cracks visible in the opening image. The melt on top of the bulge cracked to relieve the stress of the cooling melt as it stretched over the mound to form in a southeast-northwest direction. The second set of cracks formed in a northeast-southwest direction perpendicular to the first set and most likely result from the stress of cooling so near to the crater wall. However, additional observations and mapping may help better determine the stress fields interacting to create the complicated sets of fractures within this melt pond.