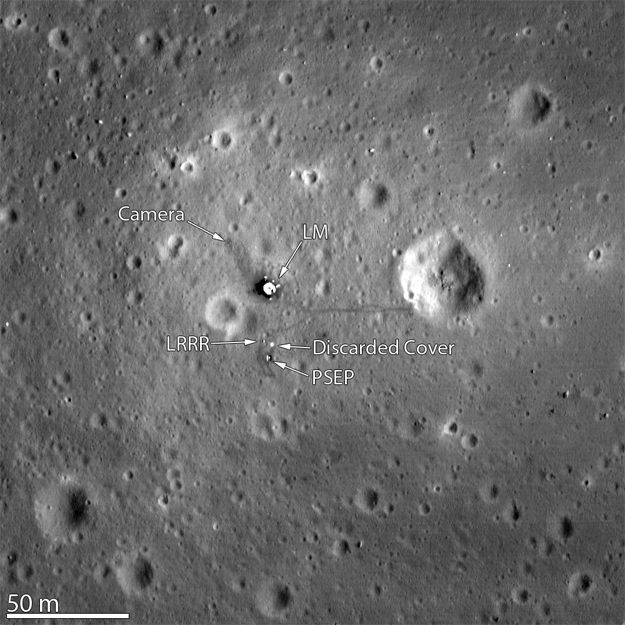 LROC's best look yet at the Apollo 11 Landing site. The remnants of Armstrong and Aldrin's historic first steps on the surface are seen as dark paths around the Lunar Module (LM), Lunar Ranging RetroReflector (LRRR) and Passive Seismic Experiment Package (PSEP), as well as leading to and from Little West crater. LROC M175124932R [NASA/GSFC/Arizona State University].

This image of the Apollo 11 landing site captured from just 24 km (15 miles) above the surface provides LRO's best look yet at humanity's first venture to another world. When Neil Armstrong took his famous first steps onto the lunar surface, he kicked around the soil. "Yes, the surface is fine and powdery." Gazing at the flat horizon, he took in the view. "Isn't that something! Magnificent sight out here." After collecting a contingency sample Neil looked around and observed, "it has a stark beauty all its own. It's like much of the high desert of the United States. It's different, but it's very pretty out here." A few minutes later Buzz Aldrin descended the ladder and joined Neil on the surface of the Moon!

You can see the remnants of their first steps as dark regions around the Lunar Module (LM) and in dark tracks that lead to the scientific experiments the astronauts set up on the surface. The Passive Seismic Experiment Package (PSEP) provided the first lunar seismic data, returning data for three weeks after the astronauts left, and the Laser Ranging RetroReflector (LRRR) allows precise measurements to be collected to this day. You can even spot the discarded cover of the LRRR.

Another trail leads toward Little West crater around 50 meters (164 feet) to the east of the LM. This was an unplanned excursion near the end of the two and a half hours spent on the surface. Armstrong ran over to get a look inside the crater, and this was the farthest either astronaut ventured from the landing site. Compared to Apollo 12 and 14, which allowed for more time on the surface, and Apollo 15, 16, and 17, which had the benefit of a Lunar Roving Vehicle, Armstrong and Aldrin's surface activities were quite restricted. Their tracks cover less area than a typical city block!