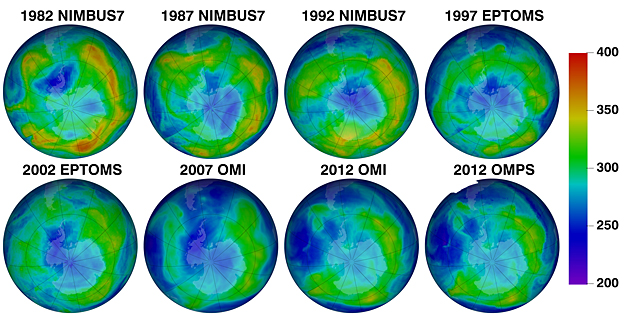 This shows the thickness of the Earth's ozone layer on January 27th from 1982 to 2012. This atmospheric layer protects Earth from dangerous levels of solar ultraviolet radiation. The thickness is measured in Dobson units, in this image, smaller amounts of overhead ozone are shown in blue, while larger amounts are shown in orange and yellow. These ozone measurements begin with the Nimbus 7 satellite; continue with the Earth Probe Total Ozone Mapping Spectrometer (EP TOMS); the Ozone Monitoring Instrument (OMI) aboard the Aura satellite; and the most recent, the Ozone Mapper Profiler Suite (OMPS) aboard the satellite Suomi National Polar-orbiting Partnership (NPP). Suomi NPP is a partnership between NASA, NOAA and the Department of Defense. Credit: NASA/NOAA

A new satellite instrument suite is now sending back detailed information about the health of the Earth's ozone layer, the shield that protects the world's population from harmful levels of the sun's ultraviolet radiation.

The Ozone Mapper and Profiler Suite, or OMPS, is one of five new instruments flying aboard NASA's Suomi National Polar-orbiting Partnership satellite (NPP), which was launched on Oct. 28, 2011. Suomi NPP is the result of a partnership between NASA, the National Oceanic and Atmospheric Administration and the Department of Defense.

OMPS continues an over three decade-long partnership between NASA and NOAA in studying ozone. OMPS consists of three instruments: the downward-looking nadir mapper and nadir profiler, and a new instrument called the limb profiler.

OMPS data will contribute to observing the recovery of the ozone layer in the coming years. The layer is expected to recover from the effects of the ozone depleting substances like halons or chloroflurocarbons (CFCs) over the coming few decades. This recovery comes as a result of a world-wide agreement in 1987 that phased out the use of these ozone-depleting substances.

"Ozone depletion has been a major concern for decades," said Mary Kicza, assistant administrator for NOAA's Satellite and Information Sevice. "Scientists need reliable observations of ozone from space and OMPS provides them."

"With the large ozone layer depletion seen in the Arctic in March 2011, it was critical to get OMPS into orbit for measurements in the Northern Hemisphere in March 2012", said Paul Newman, NASA scientist and co-chair of the United Nations Montreal Protocol Scientific Assessment Panel. It was the Montreal Protocol in the 1980s that identified and limited the use of ozone-depleting chemicals.

The limb profiler is a experimental instrument that measures the distribution of ozone at higher vertical resolution by looking through the atmosphere on an angle. It's designed to continue NASA's measurements of high vertical resolution ozone profiles from the Microwave Limb Sounder on the EOS Aura, data key to understanding how changing greenhouse gases affect the recovery of the ozone layer.

The Suomi NPP team will continue initial checkouts as part of its commissioning activities until early March and then handoff operations to NOAA. NOAA will continue calibration and validation activities and leading to the processing and distribution of data to users around the world. The Suomi NPP mission is the bridge between NASA's Earth Observing System satellites and NOAA's Polar Operational Environmental Satellite (POES) to the next-generation Joint Polar Satellite System (JPSS), which NOAA will operate. The JPSS program, funded by NOAA, provides the ground segment for Suomi NPP.

NASA's Goddard Space Flight Center in Greenbelt, Md., manages the Suomi NPP mission for the Earth Science Division of the Science Mission Directorate at NASA Headquarters in Washington. NOAA and the Department of Defense funded the OMPS instrument.