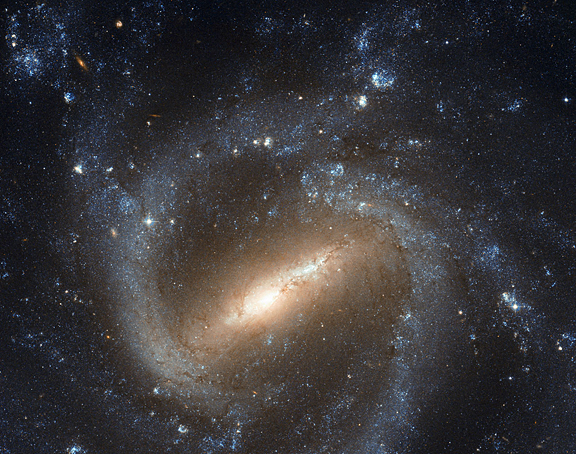 IMAGE: The NASA/ESA Hubble Space Telescope has taken a picture of the barred spiral galaxy NGC 1073, which is found in the constellation of Cetus (The Sea Monster).

Most spiral galaxies in the Universe have a bar structure in their centre, and Hubble's image of NGC 1073 offers a particularly clear view of one of these. Galaxies' star-filled bars are thought to emerge as gravitational density waves funnel gas toward the galactic centre, supplying the material to create new stars. The transport of gas can also feed the supermassive black holes that lurk in the centres of almost every galaxy.

Some astronomers have suggested that the formation of a central bar-like structure might signal a spiral galaxy's passage from intense star-formation into adulthood, as the bars turn up more often in galaxies full of older, red stars than younger, blue stars. This storyline would also account for the observation that in the early Universe, only around a fifth of spiral galaxies contained bars, while more than two thirds do in the more modern cosmos.

While Hubble's image of NGC 1073 is in some respects an archetypal portrait of a barred spiral, there are a couple of quirks worth pointing out.

One, ironically, is almost -- but not quite -- invisible to optical telescopes like Hubble. In the upper left part of the image, a rough ring-like structure of recent star formation hides a bright source of X-rays. Called IXO 5, this X-ray source is likely to be a binary system featuring a black hole and a star orbiting each other. Comparing X-ray observations from the Chandra spacecraft with this Hubble image, astronomers have narrowed the position of IXO 5 down to one of two faint stars visible here. However, X-ray observations with current instruments are not precise enough to conclusively determine which of the two it is.

Hubble's image does not only tell us about a galaxy in our own cosmic neighbourhood, however. We can also discern glimpses of objects much further away, whose light tells us about earlier eras in cosmic history.

Right across Hubble's field of view, more distant galaxies are peering through NGC 1073, with several reddish examples appearing clearly in the top left part of the frame.

More intriguing still, three of the bright points of light in this image are neither foreground stars from the Milky Way, nor even distant stars in NGC 1073. In fact they are not stars at all. They are quasars, incredibly bright sources of light caused by matter heating up and falling into supermassive black holes in galaxies literally billions of light-years from us. The chance alignment through NGC 1073, and their incredible brightness, might make them look like they are part of the galaxy, but they are in fact some of the most distant objects observable in the Universe.