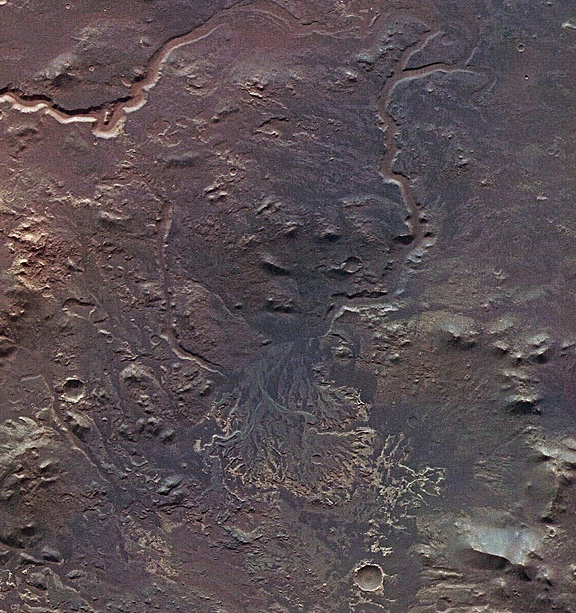 ESA's Mars Express has spotted a rare case of a crater once filled by a lake, revealed by the presence of a delta. The delta is an ancient fan-shaped deposit of dark sediments, laid down in water. It is a reminder of Mars' past, wetter climate.

The delta is in the Eberswalde crater, in the southern highlands of Mars. The 65 km-diameter crater is visible as a semi-circle on the right of the image and was formed more than 3.7 billion years ago when an asteroid hit the planet.

The rim of the crater is intact only on its right-hand side. The rest appears only faintly or is not visible at all. A later impact created the 140 km diameter Holden crater that dominates the centre and left side of the image. The expulsion of large amounts of material from that impact buried parts of Eberswalde.

After the deposition of the delta sediments in the crater's ancient lake, fresher sediments accumulated to cover up a major part of both the channels and the delta. These secondary sediments, presumably deposited by the wind, were later eroded in the delta area, exposing an inverted relief of the delta structure.

This delta structure, first identified with NASA's Mars Global Surveyor spacecraft, is characteristic of the presence of a lake in the crater at that time. Such features provide a clear indication that liquid water flowed across the surface of Mars in the planet's early history.

Both Eberswalde crater and Holden crater were on the shortlist of four possible destinations for the next NASA Mars rover, to be launched late this year. The main objective of the Mars Science Laboratory mission is the search for present or previously habitable environments on Mars. ESA's Mars Express mission has been helping in the search for the best landing site.

Eberswalde was proposed because its delta indicates the long-lasting presence of liquid water in the past and Holden Crater was a candidate because of its mineral diversity and many structures that again suggest past liquid water. Another candidate, Mawrth Vallis, exposes some of the oldest clay-rich layers on Mars. However, in July, Gale crater, the final entry on the shortlist, was selected as the mission's landing site, given its high mineral and structural diversity related to water.

Eberswalde, Holden and Mawrth Vallis will get to hold on to their secrets for a while longer.