The FY12 budget request for NASA is $18.7 billion, the same amount requested in FY10. Congress fully funded the agency's request in the FY10 appropriations bill, a level which has continued to this day. For the four-year runout (FY13 - FY16), NASA's budget projection assumes identical funding for each year - $18.7 billion. However, the Office of Management and Budget (OMB) Blue Book and NASA's own budget request disagree on out-year funding levels; NASA's assumes four years of flat funding at $18.7 billion; OMB's out-year projections indicate budgets that are below the FY12 request. 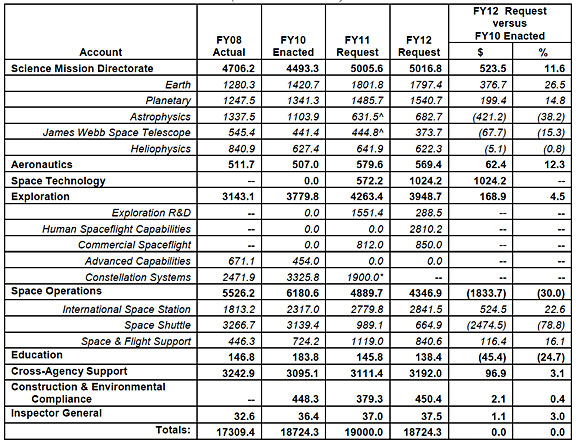 *To cover program shut-down costs. ^The FY11 request did not break out JWST from Astrophysics. To allow for comparison with FY12, the FY11 request has been redisplayed.

The budget request assumes retirement of the Space Shuttle in FY11 and provides $548 million in FY12 to cover pension costs associated with the contractor workforce that maintained the Shuttle fleet. The budget request also assumes operation and utilization of the International Space Station through at least 2020. NASA's FY12 budget proposes $2.8 billion for development of the Congressionally-directed Space Launch System and the Orion-based Multi Purpose Crew Vehicle, which is $1.2 billion less than authorized in the NASA Authorization Act of 2010 (P.L. 111-267). The 2010 Act reflected Congressional intent that NASA develop the Space Launch System and Multi Purpose Crew Vehicle as soon as possible to ensure U.S. access to the International Space Station should commercial crew and cargo capabilities fail to materialize. Furthermore, the FY12 budget proposal diverges from Congressional direction by seeking $1.7 billion over two years (FY12 and FY13) for commercial crew, which is $700 million above authorized levels. The proposal also tries to reinstate funding for the 21st Century Launch Complex, an initiative that Congress rejected in last year's bill.

The FY12 budget request responds to the NASA Authorization Act of 2010 (P.L. 111-267) in the area of science. The request reflects the scientific priorities of the National Research Council's decadal survey for Astrophysics. Because of the high scientific importance of the troubled James Webb Space Telescope (JWST) still under development, NASA has created a separate JWST line in its budget request to give the program closer scrutiny. Last summer an external review panel determined that JWST would require an additional $1.5 billion in funding and an additional year of schedule before it would be ready for launch. NASA is currently performing a bottoms-up review, and for FY12 is requesting a reduction for JWST while it awaits final analysis.