- Provides $18.7 billion, the same amount the agency received in 2010. Funding focuses on areas that will improve the Nation's space capabilities, strengthen our competitive edge, and prepare the next generation of leaders in the field. The Budget also proposes to streamline operations and boost efficiencies at facilities.
- Maintains the Nation's commitment to humanity's foothold in space--the International Space Station--bringing nations together in a common pursuit of knowledge and excellence.
- Initiates development of a heavy-lift rocket and crew capsule to carry explorers beyond Earth's orbit, including a mission to an asteroid next decade--the furthest journey in human history.
- Embraces partnership with the commercial space industry and the thousands of new jobs that it can create by contracting with American companies to provide astronaut transportation to the Space Station--thus reducing the risk of relying exclusively on foreign crew transport capabilities.
- Supports groundbreaking innovations by continuing a program of robotic solar system exploration and new astronomical observatories, including a probe that will fly through the Sun's atmosphere and a new competitively-selected planetary science mission.
- Supports a robust and diverse fleet of Earth observation spacecraft to strengthen U.S. leader- ship in the field, better understand climate change, improve future weather predictions, and provide vital environmental data to Federal, State, and local policymakers.
- Sharpens the focus of the aeronautics research program by emphasizing enhancing aviation safety and airspace efficiency, and reducing the environmental impact of aviation.
- Initiates a pilot program to provide NASA Centers and surrounding communities with clean energy through the innovative use of NASA property. 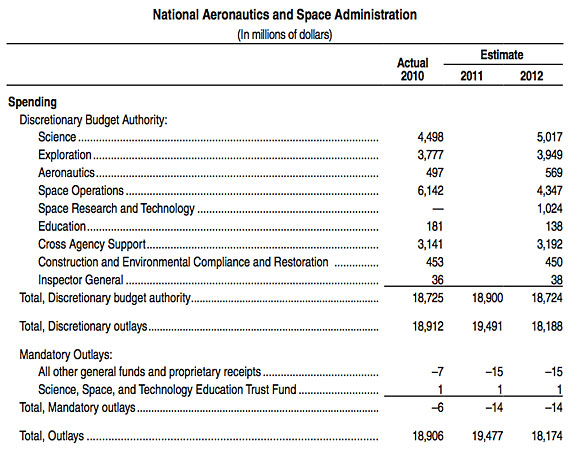 The mission of the National Aeronautics and Space Administration (NASA) is to drive advances in science, technology, and exploration to enhance knowledge, education, innovation, economic vitality, and stewardship of the Earth. To support this mission, the President's Budget provides $18.7 billion, which is roughly the same amount as in 2010. Funding focuses on areas that will improve the Nation's aviation and space capabilities, drive the growth of new industries, strengthen our competitive edge in human spaceflight and scientific research and pre- pare the next generation of leaders in the field. To maximize funding in a fiscally-constrained time, the Budget also reflects boosts to efficiency of NASA facilities and operational streamlining.

Strengthens Long-duration Human Spaceflight. The International Space Station is where we are learning how to live and work in space. The President's Budget supports the operation and enhancement of the International Space Station through at least 2020, maintain- ing the Nation's leadership in human space flight and sustaining the longest continuous human space flight mission in history. The Budget also bolsters implementation of a non-profit organization which will make the Space Station's unique research capabilities available to the Nation's re- searchers and innovators--fulfilling the promise of the Space Station as a national laboratory.

Drives Innovation in the Aerospace Industry. Many of today's space technologies still rely on capabilities developed decades ago. The Administration supports NASA's efforts to drive innovation through the aerospace sector by increasing funding for space technology programs that will make American satellites more capable and efficient; funding multiple teams at a wide variety of aerospace firms to develop innovative new crew transportation systems that will stimulate the commercial space sector and support the International Space Station; and supporting green aviation technologies through innovative fundamental research and systems-level applications to reduce fuel needs, noise, and emissions of aircraft.

Creates New Opportunities for the Nation's Aerospace Workforce. The retirement of the Space Shuttle in 2011 is ushering in a transition period for the Nation's human space flight workforce. To smooth the transition, the Administration proposes new opportunities for the Nation's vital aerospace workforce. Workers will have opportunities to participate in efforts to develop a heavy-lift rocket and crew vehicle to carry astronauts beyond Earth's orbit, and to revitalize and modernize Kennedy Space Center and the Florida launch range. Additional jobs will be created by companies competing to deliver crew and cargo to the International Space Station. The Administration also protects the pensions of those who have devoted their careers to the space shuttle program, and supports NASA's efforts to inspire and educate future aerospace workers through partnerships and innovation that will bring NASA's discoveries into America's schools.

Improves Our Understanding of Global Climate Change. NASA's Earth science program conducts first-of-a-kind demonstration flights of sensors in air and space in an effort to foster scientific understanding of the Earth system and to improve the ability to forecast climate change and natural disasters. The Administration's proposal supports several research satellites currently in development, a campaign to monitor changes in polar ice sheets, enhancements to climate models, and NASA contributions to the National Climate Assessment.

Advances Our Understanding of the Universe Through Groundbreaking Innovations. NASA's space probes, rovers, and tele- scopes have revolutionized humanity's scientific understanding of the cosmos. The Administration's proposal supports space science research grants and dozens of operating missions and telescopes currently studying the planets and stars as well as many more in development. The James Webb Space Telescope, the successor to the Hubble, is placed on a stable funding path that allows for completion of the project while maintaining a balanced astrophysics program that responds to National Research Council priorities, supports the robust suite of capabilities that are currently available, and furthers the development of revolutionary new approaches for observing the universe. The Administration also proposes funding for early work on a mission that will make the closest-ever approach to the Sun, flying through its outer atmosphere in an attempt to understand how it is heated and how it ejects the stream of charged particles known as the solar wind. Funding is also included for the initial operations of three new spacecraft, destined for the Moon, Mars, and Jupiter.

Boosts Efficiency of NASA Facilities. NASA facilities cover 124,494 acres and the Agency directly employs 18,500 civil servants. In keeping with broader Administration efforts, the Budget supports a number of initiatives to make NASA operate more efficiently. Today, over 80 percent of NASA buildings are beyond their design life. The Budget strengthens the Agency's recapitalization fund, enabling NASA to replace and/or modernize inefficient buildings, providing jobs to the local communities and leading to increasingly efficient use of taxpayer dollars.

Finds Innovative Ways to Use NASA Assets. The Administration proposes that NASA receive new authority to enter into innovative partnerships with utility companies to provide clean energy to NASA Centers and the communities that surround them.

Cuts Costs by Streamlining Operations. In addition to the facilities savings, the President's Budget saves over $100 million in administrative costs by streamlining agency operations.