18 June 2009 Paul D. Tompkins -- This morning when I woke up, I told myself, well another two days of preparation, and we'll have our shot on Friday. I woke to the news of the continuing problems with the STS-127 hydrogen leak, and all indications from KSC were that we'd have to slip to June 19 given the late hour of the discovery. Then, I started reading e-mail - a firestorm of activity! "We're GO for June 18!" Whoa! The day sent me from zero to 100 in a few seconds, and it didn't let up all day. We held our last Flight Readiness Status meeting today. With only a few items remaining until the evening, and now completed, I can honestly now say we are ready to go. As good as we'll ever be!

On the eve of our first launch opportunity, I marvel at this journey our team has taken so far - from LCROSS being a bunch of cool ideas on paper at NASA Ames, to now, as a functioning spacecraft encapulated atop an Atlas V launch vehicle, standing at Cape Canaveral, waiting for the signals that will send it from the Earth and to the moon. From a scrappy, inexperienced team of largely intelligent systems researchers, systems engineers and once-operators, to a cohesive, well-trained, ready-to-fly team. Hard to believe. And this started for me as a side project I might devote a few hours a week to. Life is amazing.

I can't stay up too late writing tonight, but I did want to share a few things. First, an update to the THE BANNER. There will be only one better picture than this one (tomorrow's), but I don't know if I'll have time to take its photo. This one actually has me in it! L minus one day!

Second, here is a picture of our launch vehicle, from earlier today, after roll-out to the launch pad. I only hope we can get weather like this tomorrow! When you see the scale of the Atlas V with people walking at the base, you realize this is no model rocket. I can't wait to watch the launch tomorrow!

Finally, I have to say you readers out there are great! You've written a lot of great comments and questions. I only regret that I haven't had the time to reply back to each of you. Let me answer a few questions now. I'll paraphrase the questions:

1. During the First Week Rehearsal, your navigation team must have been going nuts trying to compensate for the changing thruster configuration. Yes. The person who asked this question must have Navigation experience! LCROSS has no momentum wheels to maintain its attitude or orientation. We fire thrusters instead. Of course, we'd completely disturb our trajectory if we didn't do this carefully. LCROSS uses a well-proven technique of firing thrusters in fours, such that they induce a torque about the intended axis (to turn the spacecraft), but they cancel out their linear force components. When our team was forced to adjust our thruster firings to avoid the hot thruster, we had to go to a paired configuration that HAD to affect the orbit. Navigation wasn't thrilled.

2. Why does LCROSS alternate between a North pole flyby and a South pole flyby? It comes down to orbital mechanics and hitting the moon at the right angle and with the right lighting and observation parameters. Imagine that when we fly out to the moon, to insert LCROSS into an Earth orbit that is highly inclined relative to the moon's orbit, we can fly over the North pole or the South pole. Once we perform the flyby, we can either try to hit the moon when LCROSS's orbit intersects the moon's on the opposite side of the Earth, or on the same side of the Earth. If we fly over the North pole, then we swing over the top and then below the moon's orbit. In that case, to impact the South pole, we'd have to hit the moon on the opposite side of the Earth from where the flyby happened from below). In the South pole flyby case, we'd swing below the moon and then up over the top of the plane of the moon's orbit. To hit the South pole of the moon, we'd have to fly all the way around the Earth at least once, so that we could come from underneath the moon again. Either way works. If each of LCROSS's orbits is roughly one month long, then the North pole flyby leads to mission durations that are 0.5, 1.5, 2.5...months long, since we always need the half month to hit the moon from beneath. For South pole flyby orbits, since we need an even number of orbits, our mission is an even number of months (1, 2, 3...). Our mission designers are seeking a sweet spot in observation conditions, arising in October. This means they have to chose either a South pole or North pole flyby so that they can match the impact timing they want. Our launch opportunities are every two weeks (half a lunar orbit apart), and our flyby poles alternate each opportunity, so that we're always hitting the moon on the same side of the Earth (roughly).

3. Finally, one of my readers suggested a really great idea. He wanted to know if our Centaur would be venting gas as part of its sequence. The reason he asked is that under the right lighting conditions, the sunlight high above Earth can actually illuminate the vented gases, making them visible from the ground. He said he was able to observe this effect as a kid right after the Apollo 14 launch. Cool!

So, I've tracked this down, and our Navigation team has provided some data for those of you with enough experience might be able to use to predict LCROSS's early-mission trajectory. Here is the information and some figures (attached). Best for our friends in the Southeast...and by that I mean Australia, Indonesia, Singapore and Thailand...enjoy...and thank you for such a great idea! From our extended Navigation team:

"I have used the P10 trajectory for 18 Jun in SOAP to assess visibility starting at separation from LRO. Attached are two SOAP screen shots showing links to some major cities. The yellow line running NNW to SSE is the terminator. Locations sufficiently to the left of this line (preferably with Sun elevation less than -12 degree though this limit occurs early) would be best situated to observe the blowdown event assuming it occurs before the sky gets too bright. Perth is most favored, with Sun El -6 degree at 22:49 UTC, almost an hour after LRO separation.

The red line is the ground track (leading part only). The yellow line extending to the right is the link to the Sun (LCROSS in sunlight). The time ticks on the trajectory line (lower left, gray; upper right, light blue) are spaced at five minutes. There is also a light blue link from LCROSS to the current position of the ground track.


We have posted the LCROSS trajectory on the JPL Horizons system (18 Jun P10):

Availability of the LCROSS trajectory on Horizons has been announced on Seesat-L (where those interested in observing fuel dumps from Centaur rockets have been known to gather): 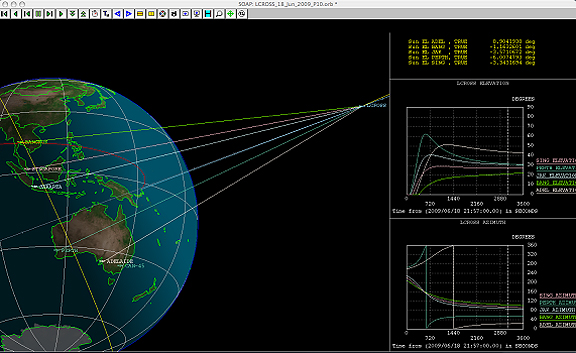 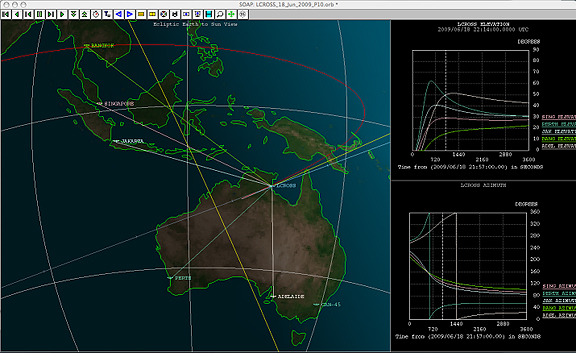