Just over a week from now, a crew of six will embark on a simulated mission to Mars. On 31 March, when they enter a special isolation facility in Moscow, the hatch will close behind them, only to be opened 105 days later. The two European participants will share their experience through a regular diary on the ESA website.

The purpose of the Mars500 study is to gather data, knowledge and experience to help prepare for a real mission to Mars one day. The participants will act as subjects in scientific investigations to assess the effect that isolation has on various psychological and physiological aspects, such as stress, hormone regulation and immunity, sleep quality, mood and the effectiveness of dietary supplements.

Oliver Knickel and Cyrille Fournier will write a weekly update about daily life in the isolation facility, the scientific experiments and the progress of the study.

Before they enter the facility, Oliver and Cyrille introduce themselves and explain how their preparations are going. 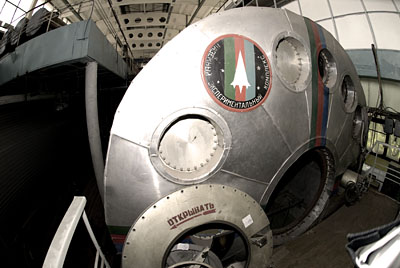 My name is Oliver Knickel. I am a 28 year-old engineer in the Federal German Defense Force, Bundeswehr. I live in Hamburg, Germany. I applied to take part in the Mars500 programme because I thought this is a unique project to bring mankind a step closer to Mars and it would be a great personal challenge to take part.


My name is Cyrille Fournier. I am 40 years old and an airline pilot. During the study I look forward to observing how communications develop and how relationships are established between crewmembers. I expect that each of us will feel both highs and lows, mentally, physically and socially. I am however optimistic about how the experiment will turn out as I strongly believe the group, as a whole, will be able to overcome momentary and personal downs.


After a selection process of more than 15 months, we were invited with three other Europeans to start training in Moscow at the end of January 2009 in preparation for the 105-day study. So far our intense and interesting training has been together with our four Russian crewmates in Star City and at the Institute of Biomedical Problems (IBMP) to the northwest of Moscow. This included training on the module itself, the experiments to be fulfilled in the module and various team building exercises, including winter survival training in the Russian forest with temperatures down to -27°C!
The cooperation with our Russian partners is going very well. The Russian crewmembers include the commander Sergei Ryazansky (34) who is a cosmonaut and biologist, Oleg Artemyez (37), a cosmonaut from Energia and an engineer, Alexei Shpakov (25), a physiologist and Alexei Baranov (34), a medical doctor.

It is very interesting to learn more about their professional and even more about their cultural background. This way we Europeans try to talk as much as possible in Russian while the Russians usually reply in English so we can all improve our language skills. So we speak a language that can be called 'Ruslish'.

Right now we are very busy drilling ourselves on the experiments that we will perform during the isolation period. There are more than 40 different scientist teams from Europe, Russia and all over the world involved and in order to give them good results we must perfectly master every single step of each experiment.

But of course the crew also uses the spare time for example by going bowling together or to a bar to watch a football match, or to take in one of the various cultural opportunities of Moscow, like theatre, ballet or the circus.

As the study starts very soon, all of us are highly focused and motivated to successfully complete the isolation period and to fulfil the actions for which we have so intensely and thoroughly trained over the last two months.


Last week we completed the baseline data collection. These data, about our current physical and mental state, will later be compared to the data collected during the isolation.

The coming week, before the isolation starts, we will participate in a three-day dry run in order to have one last run through and check all the different procedures which will have to be fulfilled inside the module.