NASA Ames CIO Blog: Why Make A Universe of Data Available To The Public?

Over the past 50 years, NASA has taken people into space, to the surface of the moon, and has allowed people to see Earth, other planets in our solar system, and the depths of space through the eyes of satellites, telescopes, robots, and through the cameras of astronauts. With each passing decade, advances in technology made images clearer, the information coming back from space richer, and the world smaller.

In 1969, America watched on television as NASA landed on the Moon. In 1997, America downloaded "live" images of Mars on the Internet. Ten years from now, how will America experience and participate in the new era of space exploration? How will NASA leverage zettabytes of data to the benefit of humanity?

This is the intro of a white paper I am currently working on. In this white paper I am taking a look at NASA's current external facing web presence, and with an outlook of what space exploration and the web might look like 10 years from now, describe how I think NASA should re-architect itself in order to fully leverage the web as platform and take the lead in open, transparent and participatory space exploration and government (previous post).

I am reminded again of this intro while reading our announcement today - we're teaming up with Microsoft to make a universe of data available to the public.

A little over 2 years ago, in my previous role as strategic business development lead here at NASA Ames, I negotiated the NASA Google collaboration. At the time, I aspired it to be the first in a series of Space Act Agreements NASA would sign with companies that share my vision to make NASA's data - and America's investment in space exploration - more accessible to the world on the Internet. Having since moved on to become the NASA Ames Chief Information Officer, today's announcement of our collaboration with Microsoft - which we worked on for over 18 months - signifies another exciting step in this direction. 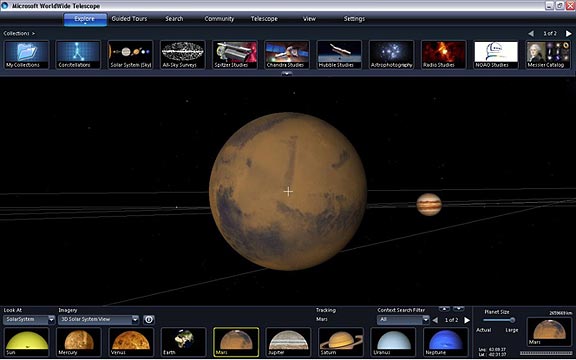 Moving towards a web of data

Working with partners such as Microsoft, Google, and Cisco to share our data with the world is part of a larger strategy that ties in with the next evolutionary phase of the web as we move from a web of linked documents to a web of linked data. These last few weeks I have been excited to read about our new Federal CIO Vivek Kundra and his plans to establish Data.gov to provide the public with access to all federal information that is not private or restricted for national security reasons. As I said two years ago, NASA has gathered more data about the solar system than any other agency in the world, and I look forward to working with Vivek and our team at NASA to increase the public accessibility of this data.

Our agreement with Microsoft is unique in the sense that we will host the NASA data here at NASA Ames (over 100 terabytes) and serve it on the web through the WorldWide Telescope (WWT) platform. In a sense, we are using the context rich environment of WWT through our partnership with Microsoft to provide our audience a window into the universe of data we have gathered and continue to gather with our satellites and telescopes.
This data will be hosted on a new cloud platform built on open source technology that was specifically designed to host vast quantities of scientific data. The platform will enable scientists to build applications on a common, secure framework. Several new pilot projects built on this platform will be coming out in the weeks and months ahead, so stay tuned...

And in honor of the recent successful launch of the NASA Kepler mission, let me leave you with this intruiging thought I recently came across in this article:

The night sky is essentially a database, crammed with information in the form of electromagnetic radiation, known more generically as light.