As mentioned in my update last month, we do expect to conduct a launch countdown in late September — as scheduled.

Having said that, it is still possible that we encounter an issue that needs to be investigated, which would delay launch until the next available window in late October. If preparations go smoothly, we will conduct a static fire on Saturday and launch sometime between Tuesday and Thursday (California time). The SpaceX team worked hard to make this launch window, but we also took the time to review data from Flight 3 in detail. In addition to us reviewing the data, we had several outside experts check the data and conclusions. No flight critical problems were found apart from the thrust transient issue.

Flight 5 production is well underway with an expected January completion date, Flight 6 parts are on order and Flight 7 production will begin early next year. We are now in steady state production of Falcon 1 at a rate of one vehicle every four months, which we will probably step up to one vehicle every two to three months in 2010.   --Elon-- 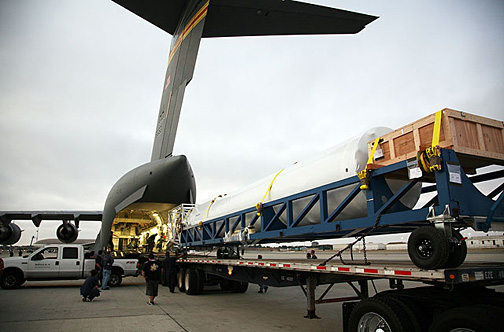 Expedited delivery — SpaceX purchased a C-17 flight from the USAF to fly the Falcon 1 Flight 4 vehicle from Los Angeles International to the Kwajalein Atoll. 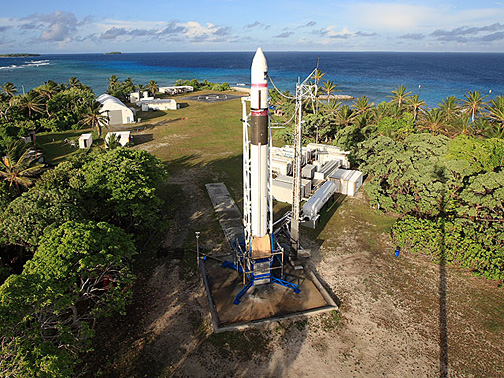 SpaceX's Falcon 1 Flight 4 on the launch pad at Omelek Island in the Kwajalein Atoll of the Marshall Islands (19 Sep 2008).